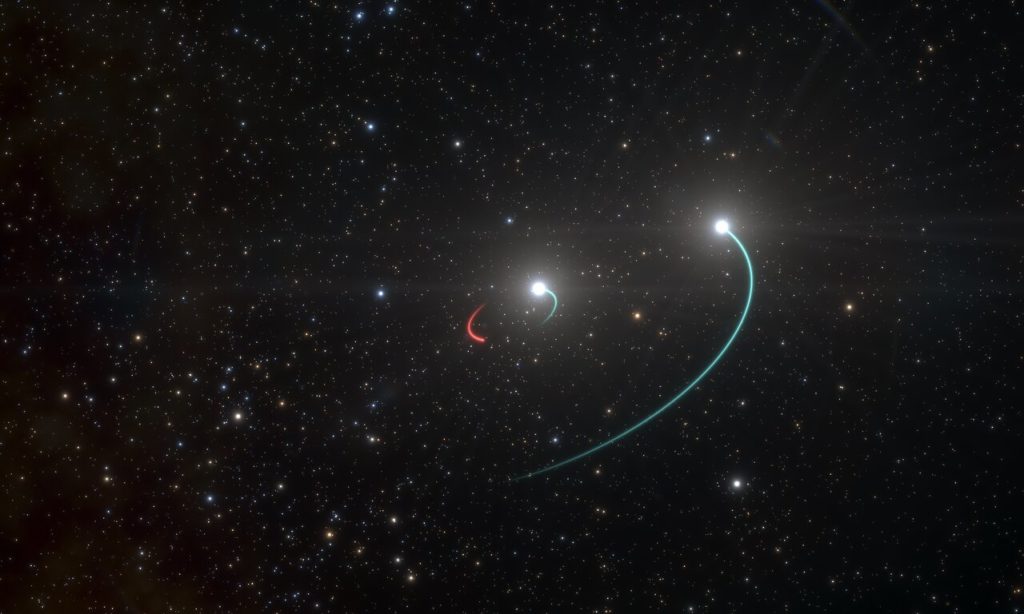 This artist’s impression shows the orbits of the objects in the HR 6819 triple system. This system is made up of an inner binary with one star (orbit in blue) and a newly discovered black hole (orbit in red), as well as a third object, another star, in a wider orbit (also in blue). Credit: ESO/L. Calçada

[ThTh1] Even as astronomers probe the most distant parts of the universe, we are finding that the nearby universe is not as well-explored as we’d like to think. When I was starting graduate school, we discovered that the nearest galaxy to our own was being devoured by it. And since then, another small dwarf has been discovered. About a decade ago, we suddenly discovered the third nearest star to the Sun, a brown dwarf that had been too cool and too faint to see until WISE was launched. This week saw the announcement of the discovery of a new claimant to the title of the nearest black hole to the Earth. The black hole is only a thousand light years away, very close in cosmic terms (although not close enough to pose any danger).

Black holes are difficult to find because…they are black. They don’t emit light. And light is the primary messenger astronomers rely on to bring us information from the cosmos. The first black hole we ever discovered was Cygnus X-1, about 6000 light years away. We couldn’t see the black hole itself. But what we could see was that a large blue star was orbiting something massive. And that massive thing was giving off no optical light but a huge amount of X-ray light. We figured out that these X-rays were coming from hot gas being pulled off the blue star and into the black hole. Since that time, three other black holes have been discovered a little closer than Cygnus X-1. Their presence was announced by eruptions of X-ray light as gas from a companion star fell into them. AO620-00 was, until last week, the closest to our planet (its name comes from its coordinates on the sky). After Stephen Hawking died, a radio transmission was sent toward the black hole in his honor.

However, there is a great interest now in finding the so-called “missing” black holes — those with masses greater than a neutron star (the most massive object you can have that will hold up under its own gravity) and the larger ones we see in systems like Cygnus X-1, least of all the giants we see in the cores of galaxies. These black holes should exist, but haven proven elusive because…again…black holes are black. Unless they are gobbling up a companion, you can’t see them.

Until now, at least. What the ESO team did was monitor a known binary star called HR 6819 (its name comes from the Yale Bright Star Catalog, where it was first recorded). This system, which is just barely bright enough to see with the naked eye, was thought to be composed of two stars orbiting each other. But when scientists at the European Southern Observatory looked at the data, they found that there was a third object in the system. This object does not give off any light but is at least four times the mass of the Sun. There is some disagreement about how big neutron stars can get before they can no longer support their own weight. It depends a lot on the physics and how fast the star is spinning. But it’s generally agreed to be around 2.1-2.2 times the mass of the Sun.

So what’s bigger than a neutron star and doesn’t give off any light? Right. A black hole. Just one of the silent majority of “low” mass black holes we know are out there. And now the race is on to find even more of these things.

[ThTh2] Speaking of nearby things…Comet SWAN just made its closest approach to Earth and is now plunging toward the Sun. It’s just barely visible to the naked eye right now but very low on the sky just before dawn for those in the Northern Hemisphere. There is a hope that it will brighten as it disintegrates and we may get a show in the next few weeks. Keep an eye on Space Weather, which has daily updates and sky maps.

[ThTh3] I will never not put this sort of thing into the throughput:

You’ve seen a Sunrise before, but have you seen a Galaxy rise? 🌌
I've always wanted to get into timelapse photography, and this is my first attempt at it. I love getting a sense of the Earth spinning. I had a very peaceful night making it. Hope it brings you some peace as well! pic.twitter.com/SSK9yxf0Ag

[ThTh4] Much as I hate to bring attention to a crackpot … the woman pushing the “plandemic” nonsense appears to be a crackpot and a liar. I mention her because there are growing concerns that even if we get a Coronavirus vaccine, a lot of people won’t use it because they’ve been fed a steady diet of lies and misinformation. I have no idea how widespread these conspiracy theories about Coronavirus are. It’s easy to get fooled by social media where anti-vax lunatics and grifters are plentiful. But they don’t have to be too widespread for the virus take a huge and unnecessary toll on our society, even with a vaccine. Just look at what anti-vax has done with measles.

[ThTh5] One of the problems that comes up in research in general — and research on COVID-19 in particular — is “collider bias”. This Twitter thread explains this subtle bias very well. Be extremely leery of people claiming, for example, that smoking protects you from COVID-19. It’s easy to let the data fool you.

[ThTh6] Sociology is science, isn’t it? Right? OK. This story looks at what really happened when some teenage boys found themselves in a Lord of the Flies situation.

[ThTh7] Almost a thousand years ago, the moon disappeared. Click this article to find out why! (No, seriously, it’s interesting. And a hat tip to Will for finding it.)