The following story is meant to be humorous, and is not intended to represent the real-life Mike Pence. As far as we know he has not, in fact, formulated a proof of Fermat’s Last Theorem.

Many people carry a little something around with them at all times. A sort of vade mecum, if you will. It could be devotional, talismanic or practical; a Rosary, a rabbit’s foot or a multi-tool. For Mike Pence -— and few people know this, mind -— it’s a unique class of knife. How this came to be, of course, is a snorter of a story.

When Mike was fifteen, he suffered a catastrophic ski jumping accident which resulted in a compound fracture of a femur. I won’t be telling that story as it’s rather graphic, but suffice it to say it involved several bison and a half dozen Mounties covered in blood. As a result, he was laid up all winter and boredom crept in, as it does.

He called me one day.

“But, Mike,” I said. “You were going to work on a proof of Fermat’s Last Theorem. It’s only been three weeks!”

“I was and I did,” he said. “And let me tell you, Bryan, you’d need a margin as wide as this great nation to fit the beast.”

“Are you going to submit it for publication in some scholarly journal?” I asked.

“No, no. This knowledge is of no practical benefit to our fellow man. I sought it only as a whetstone for the mind in my isolation. What I need now is some reading material, and I think you’re just the fellow to procure it for me.”

“Mike,” I said.”You’re so widely read that I don’t know just what to get you.”

“I think biography is a safe genre,” he replied. “The lives of great men may be an inspiration or a cautionary tale. To me, they will be a comfort in my convalescence.”

Well, it was as I spied his house on my walk home from school the next day that I remembered, so I doubled back to the public library. I grabbed a swathe of books which, through a pure accident of the Dewey Decimal System, was comprised entirely of biographies of commissioners of Major League Baseball.

Thus, three years later, we found ourselves spending Spring Break with our fellow Civil War reenactors — we were the 23rd Indiana Light Artillery, you understand — participating in a reenactment of the Battle of Kennesaw Mountain.

It was a fine April morning.

The air was clean and crisp and the unit woke to muster up at our position just near a hobby farm.

Our buddy Greg Hoff was checking out our 3-inch Ordnance Rifle which, despite the name, was a class of small cannon. (Incidentally, Greg was the drummer in a locally popular punk outfit you may have heard of called Lord Smudge and the Tonetones). The rifle was an 800 pound wrought iron gentleman with a great chthonic boom that could liquify the contents of your bowels.

Don’t ask me how I know; I’ve no doubt you could guess and hit near enough to the mark yourself.

Mike was very invested in the mythology of the thing, Sherman’s army and the battlefield and Shoeless Joe Jackson and all sorts of old timey nonsense I couldn’t for the life of me follow. I was more interested—and could not have been more disappointed—in the prospect of camp followers. I pointed out early in the campaign that nearly 90% of the casualties suffered by the real 23rd died of disease and that while he and Hoff and the rest were off play fighting I’d be pretending to be on my deathbed. This, of course, looked suspiciously like sleeping in.

So it was that bright morning that I lay in my cot playing my usual part: minding my own business, thoughtfully considering the inside of my eyelids whilst putting on a brave face fighting a losing battle against gangrene, cholera, dysentery, the English sweat or -— on a certain occasion during a cold, windy and rainy rendition of the Battle Resaca —- the black death.

I liked to keep my options plentiful.

That morning it was yellow fever.

I remember it distinctly, the tent fluttered in the gentle, Georgia breeze. Somewhere a cock crowed. Flies buzzed about the beans that’d been my breakfast. And then the morning was broken by an unholy explosion, a boom so sudden and so loud that I flopped out of my cot and nearly opened my chest cavity on the razor sharp lid of a can of beans.

I burst out of the tent to discover untempered chaos. Hoff was stumbling about near the cannon in a daze. The rifle had kicked back and rolled over someone’s foot, the someone in question now rolling in the high grass in exquisite pain. Several shelter halves had been flattened by men running away from the blast. Some of our infantry down the line thought the battle had started and were charging a unit of Confederates, beyond who were waking in complete ignorance that their position was about to be overrun.

Somehow, in checking the 3-inch in the early morning idleness, drummer Hoff had fired it off. 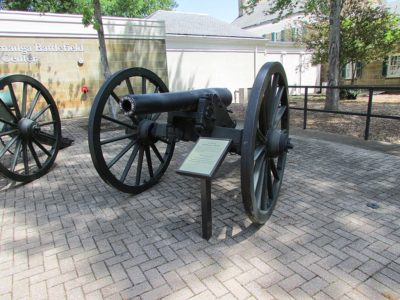 Our unit was in shambles, but the real chaos came from the adjacent farm. Above the animal noises was a shout of people calling for help. We rushed over. A tempest of chickens fluttered about. A goat bleated madly. Worst of all, a farmer, his right arm in a cast from his wrist to his shoulder, ran out of the barn in a panic.

“Estelle! Our Estelle is calving! The cannon blast put her in labor!” the farmer cried.

Mike and I were the first on the scene. Mike put his hands on the mother’s belly.

“Gosh dang it, Bryan, this calf is not in the proper position!” he said. “Do you have gloves, good farmer?”

The farmer confessed that he had none.

Mike, unperturbed, brought himself around to the rear of the laboring heifer. I will spare you, dear reader, the most gruesome details, but the calf was, through Mike’s messy and rather penetrative intervention, brought around and delivered into the world. The calf didn’t appear to be breathing so Mike sucked at the poor thing’s snout to get it started.

Many would call the sight of mother and calf a beautiful thing, and I’ll allow it may be so, but I found it stomach churning.

“Bryan,” Mike said, absently putting his arm—itself covered in blood and viscera and God knows what else—around my shoulder. I fought the impulse to vomit. “The reason she eats the afterbirth is that, were she in the wild, the scent could attract predators.”

That was it. Technical terms had been used. The partially digested contents of the can of beans aforesaid rose violently up into my throat and I vomited like I never have before or since.

Another issue, however, presented itself. You see, the calf was male.

“What plans have you for his, shall we say, disposition?” Mike asked.

“I suppose I’ll need to have him fixed, even though, strictly speaking, he’s not broken,” the farmer replied with a feeble laugh.

“Well then, when will you be castrating the poor lad?”

“This is the first time I’ve dealt with this, sir. I frankly have no idea,” the farmer said.

“There is no consensus when it comes to the timing of the castration,” Mike said. “However, from what I understand from my travels in America’s dairyland, the best intervention is early.”

“And what does the literature say regarding the question of banding versus cutting?” the farmer asked.

“I admit there’s as little consensus there as there is regarding the timing,” Mike said. “But, as I see that you have two beautiful little girls, I recommend the knife. Banding results in the eventual sloughing off of the testicle-laden scrotum and many consider this unsightly.”

There was a great confusion of searching and, after several minutes, a Newberry Knife of questionable sharpness was produced. It was found in the family junk drawer, though none could ascertain how it had found its way there. Mike looked dubiously at the instrument, a dull and rusty fellow. He’d need all the strength in the forearms he could muster to geld this lilly in one go.

A deep breath and a quick prayer heavenward and our man had himself steadied. Before you knew it he had a pair of newly freed bovine testicles in his left hand and a broad smile of relief on his face.

To this day, Mike carries a sharpened Newberry Knife about with him at all times, just in case.

Some time I should tell you about the summer Mike and I spent as lighthouse keepers in Downeast Maine and foiled a Jesuit conspiracy. 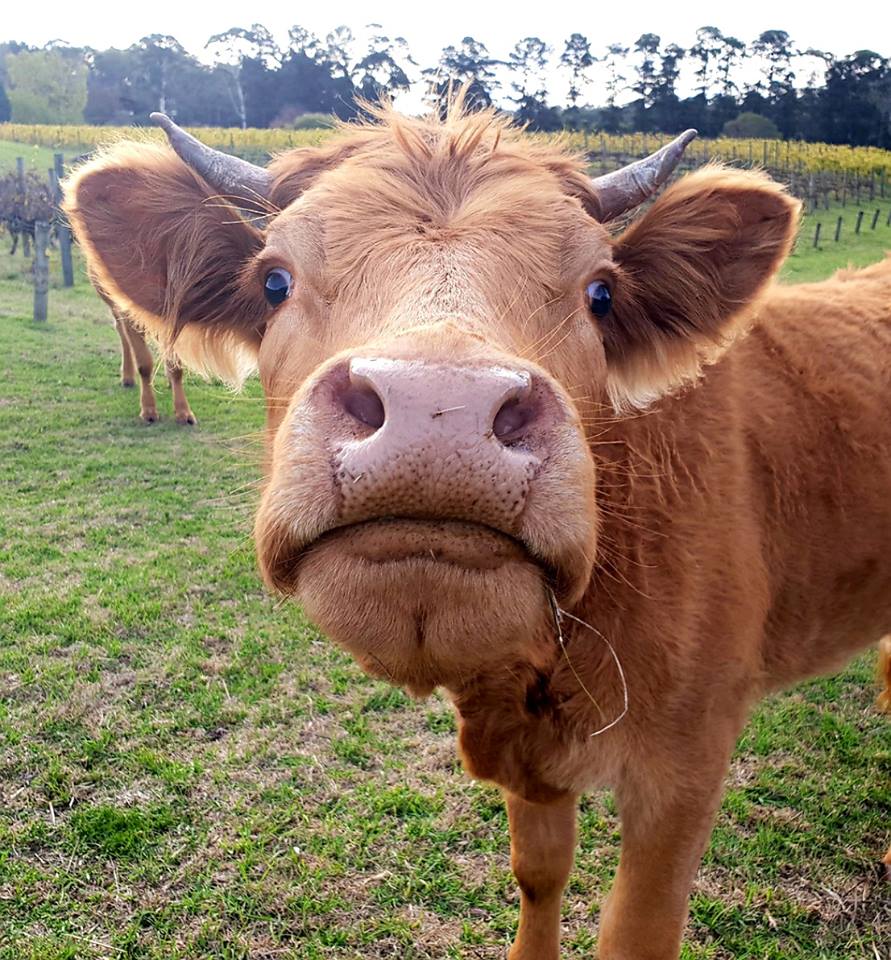 Photo by Photwik via Wikimedia Commons