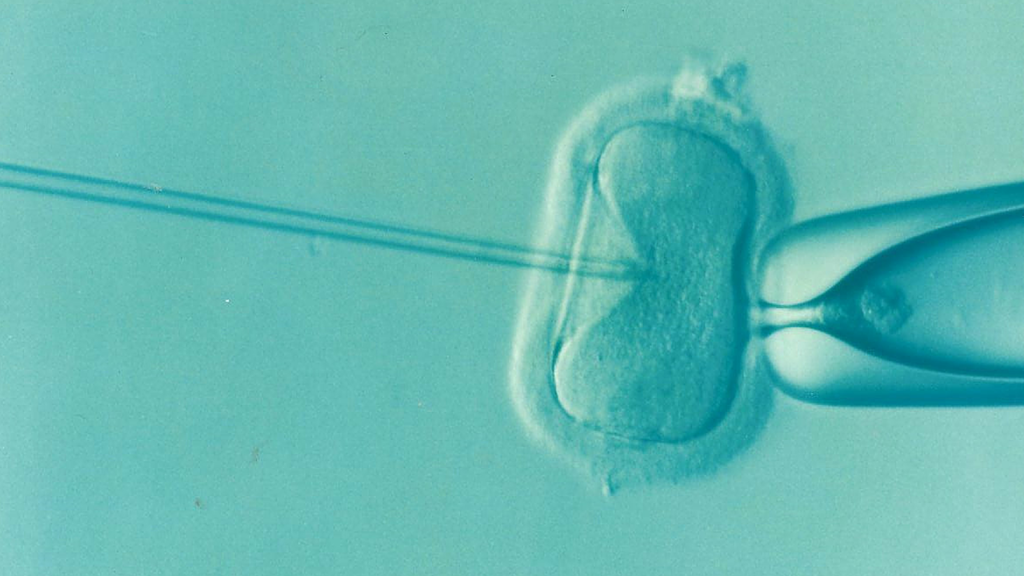 Photo by DrKontogianniIVF via Wikimedia Commons

L1: Is a child conceived after his or her biological father’s death eligible to receive social security survivor’s benefits? It is a perfect law school exam question, and one the Supreme Court tackled in 2012. The answer: it depends, of course.

In 1999, newlyweds Karen and Robert Capato received devastating news: Robert had cancer. To make matters more tragic for the couple, the proposed treatment was likely to render Robert infertile. The Capatos chose to freeze Robert’s sperm, just in case in vitro fertilization would be necessary in the future for them to have a child.

As fate would have it, Karen conceived naturally and bore a son in August of 2001. They hoped to give the boy a sibling, but sadly Robert died of his illness in March of 2002. He left behind two children from a previous marriage in addition to the son he’d had with Karen. His three children were the named beneficiaries of his social security benefits.

Karen began IVF treatments soon after Robert’s death, resulting in twins born in November 2003, a year and a half after Robert’s death. Karen applied to social security to receive benefits for her twins, but her application was denied; per the Social Security Administration, the twins were not “children”, as the term is defined in the Social Security Act: “A child or legally adopted child of an individual”. An alternate section provided that referral to the state intestacy laws -inheritance laws for people who die with no will- to determine whether a person should be considered a “child” of the decedent. In other words, absent a will, would the person be eligible to inherit from the deceased’s estate the same as a duly recognized child? If not, then they are not entitled to the benefits.

Mrs. Capato appealed the denial of the claim on the twins’ behalf. The administrative court ruled on the side of the SSA, and the federal district court affirmed. The US Court of Appeals for the Third Circuit, however, disagreed; it felt that the twins, being undeniably the biological children of a married couple, were entitled to benefits under the SSA. The District Court had relied upon Florida’s intestacy laws, under which the twins would not have a right to inherit, but the Court of Appeals opined that intestacy laws need only be consulted if there is question as to whether a person is a child of the decedent, which the court did not feel was in question here.

The government appealed to the Supreme Court. In 2012, the 9-0, unanimous opinion of the Court was released (a single opinion without any concurrences, a rarity here in Wednesday Writs.) The opinion from our case of the week, Astrue v. Capato, was penned by Justice Ginsburg. She began by pointing out that the circumstances of the twins’ birth and parentage were not contemplated at the time the Social Security Act was passed. Nevertheless, the Court would find that the Administration’s reading and interpretation of the text was “better attuned” to the intention of the Act, which was to provide for individuals who had depended upon the deceased for their support during his lifetime.

The Court did not agree with Capato that the Act impliedly considers the biological child of a married couple as a “child” for the purposes of the Act. Notably, other places in the Act call out the distinction, referring to “legitimate” and “illegitimate” children. Furthermore, not every biological offspring of a person is legally considered their child (such as the natural parents of adopted children, who generally hold no legal status as a parent.) Thus, the Court discarded the lower court’s holding that the provision for referring to a state’s intestacy laws was an alternative to be followed only when biological parentage is not established., but rather a test to be met by all such applicants.

In Florida, the state where Robert was living when he died, children born after a parent’s death may only inherit if conceived during the parent’s lifetime. Furthermore, Florida law holds that a marriage ends with the death of a spouse, throwing into question Mrs. Capato’s argument that the twins are the biological children of a married couple.

Mrs. Capato next argued that posthumously conceived children were being denied equal protection under the law, because they were being treated as an “inferior subset” of children. In the past, the Court applied “intermediate scrutiny” to cases alleging denial of equal protection among different classes of children- particularly, those born out of wedlock. But the Court rejected the argument that posthumously conceived children do not share the characteristic that made the treatment of “illegitimate “children nefarious: the latter was intended to punish the “immoral” actions of the parents. The equal protection analysis appropriate here, Ginsburg wrote, was rational basis (meaning, is the practice “reasonably related” to a rational government interest? The Court answered in the affirmative. Denying survivor benefits to posthumously conceived children advances the government’s purpose of reserving benefits for children who have lost the financial support of the deceased parent (which the Court argues that Mrs. Capato’s children never had to begin with.)

Tragic circumstances—Robert Capato’s death before he and his wife could raise a family—gave rise to this case. But the law Congress enacted calls for resolution of Karen Capato’s application for child’s insurance benefits by reference to state intestacy law. We cannot replace that reference by creating a uniform federal rule the statute’s text scarcely supports.

So, to answer the question we began with, whether or not a posthumously conceived child is entitled to survivor’s benefits depends on the law of the state in which the deceased parent was domiciled at death. Several states (California, Colorado, Iowa, Louisiana, and North Dakota, to cite examples given in the opinion) do have laws enacted that provide for these children to inherit, so long as the child was in utero within a certain time-frame after the death, anywhere from 2 to 3 years depending on the state.

L2: A California judge has thrown out the US Women’s Soccer Team’s equal pay lawsuit, but the team vows to fight on.

L3: The modern scourge that is the HOA is profiting from the pandemic, taking advantage of people who find themselves currently unable to participate in spring yard work.

L4: An estimated 800 lawsuits related to COVID-19  have been filed so far; over a quarter involve prison conditions.

L5: “One of the sentences a judge does not imagine—much less welcome—writing includes the words ‘butt shaking’ in describing a lawyer’s alleged actions…” … And it gets worse.

L6: In an unprecedented event, SCOTUS hears arguments via teleconference – and broadcasts live.

L7: Not unprecedented but rare: Justice Thomas has questions. (Also of note and relatable, Justice Sotomayor forgets to unmute.)

L8: I know a lawyer who got his license back after a stint in federal prison for wire fraud. True story. But for most disbarred lawyers, it’s pretty tough to do.