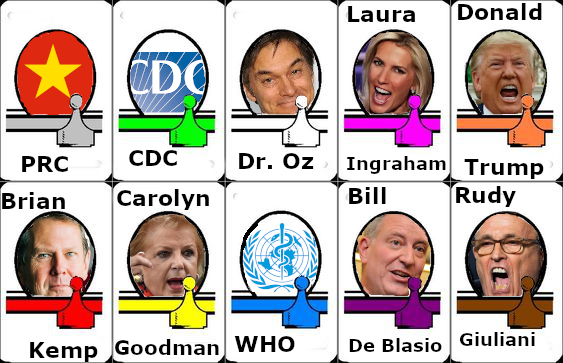 You may remember, an ice ago, when we did a symposium on board games. Em wrote a great post about a true classic of a game: Clue (or Cluedo, for you Commonwealth types).

One thing about Clue, however, is that you don’t have to play the classic version. Let’s say you find the cover art, in which Miss Scarlet seem about to tie up a very willing Colonel Mustard, disturbing. Or you’ve never forgiven them for killing off Mrs. White and replacing her with Dr. Orchid. Or you’ve just played it a million times and are bored with the standard characters. Well, good news: like seemingly all board games these days, there are different versions of Clue, with the rooms, suspects and weapons tailored to whatever subject you want. I actually don’t have the classic Clue game; I have a Simpsons version (“It was Marge…with the poisoned donut…in the Android’s Dungeon”). But there’s a Scooby-Doo version, a Downton Abbey version, a Star Wars version, a Game of Thrones version, a Harry Potter version, ad infinitum ad nausem. It wouldn’t surprise me if there were an Epic of Gilgamesh version (“Shamhat …at the wedding…with the Bull of Heaven”).

So after reading the rather bizarre and suggestive update to the fish tank cleaner drinking story last week, Andrew joked that the story should be included in the Coronavirus version of Clue. The COVID crisis is going is going to be a cultural touchstone for a long time, after all. I’m sure TV series are already being rewritten to include it. SO it’s only a matter of time until boardgames are updated. So, with that in mind, here are my humble suggestions for the rooms, suspects and weapons if such an edition of Clue ever comes about.

The Setup: Dr. Scientific Method has been found dead! And, amazingly, he did not die of the Coronavirus despite having a number of pre-existing conditions, such as being alive. You have to figure out who committed the murder!

So, the solution to the murder mystery might be, “I accuse Carolyn Goodman…of making him watch the celebrity ‘Imagine’ video…on the Senate Floor!” You can make your own suggestions in the comments.

Too soon? Insensitive? Most likely. But imagining what COVID Clue might be like has got to better than watching another one of Trump’s insane press conferences from between my fingers.