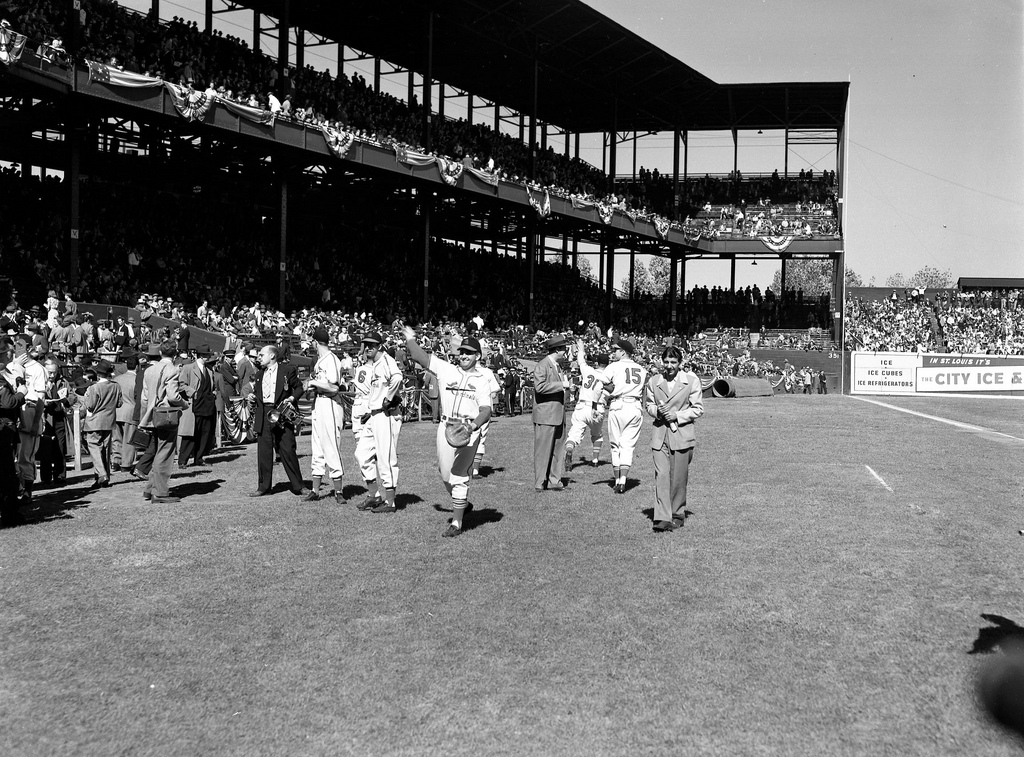 Members of the St. Louis Cardinals warm up before a World Series game against the Boston Red Sox at Sportsman’s Park in St. Louis, 1946. [Public Domain]

Since baseball in the present time is on hold for the duration, let’s resume our travels through its past. We began post-WWII and proceeded through the Nationals’ first championship in 2019, with the entire series of Series posts listed here. This time we’ll finish out the 1940s. The names might be unfamiliar, but at least you’ll recognize all the teams (mostly).

The Detroit Tigers, led by slugger Hank Greenberg and pitcher Bobo Newsom, eked out an AL pennant by one game. Newsom was a colorful player with a larger-than-life personality; Ogden Nash made him the “N” in his ABC Of Baseball Immortals:

N is for Newsom,
Bobo’s favorite kin.
You ask how he’s here,
He talked himself in.

The Reds, on the other hand, had won 100 games and finished in 1st by 12. Still, it was a pretty even contest, going the full 7 games, with Paul Derringer out-dueling Newsom to win the final game 2-1.

New York Yankees over Brooklyn Dodgers, as will happen a lot over the new couple of decades. The Yankees featured Lefty Gomez, Phil Rizzuto, and Joe DiMaggio hitting a brilliant .357/.440/.643 with 30 HRs and 125 RBIs, and earning the MVP over Ted Williams’s .406 season (which included 37 dingers and, incredibly, only 13 strikeouts). WAR gives it to Willams, and it’s tempting to ascribe the result to Joltin’ Joe being a darling of the media where The Kid had all the charm of Barry Bonds.

The Dodgers weren’t yet the Boys of Summer; the most familiar name is Pee Wee Reese, in his first full year replacing Leo Durocher at shortstop. Their most popular player was Alabaman Dixie Walker, who would later ask to be traded rather than play with Jackie Robinson.

The Yankees won in five games, all close. The Bums still had never won a series and wouldn’t for a decade and a half.

This time their opponents were the 106-win Cardinals. Their most familiar name is Stan Musial (it was his rookie season), but their best player of the year was pitcher Mort Cooper, who went 22-7 with an ERA of 1.82 and WHIP of 0.987 (that is, he averaged less than one baserunner per inning) and earned the NL MVP. (There was no Cy Young award until 1956.)

Cooper didn’t pitch well during the Series, giving up 8 earned runs in 13 innings, but it didn’t matter: the Cards won it in five close games.

A Cards/Yanks rematch; the Yanks having been somewhat less dominant in the regular season (98 wins, but still 13.5 ahead). Their roster is starting to thin, with outfielders DiMaggio and Henrich, shortstop Phil Rizzuto, and starting pitcher Red Ruffing all absent because of military duty. It was the Yanks’ turn to have a pitching MVP: Spud Chandler with ERA 1.64 and WHIP 0.992.

The Cards are missing outfielders Enos “Country” Slaughter and Terry Moore and pitcher Johnny Beazley, but still managed 105 victories and finished first by 18 games. This was the year Musial (only 22) broke out as a superstar: .357/.425/.562 and the NL MVP.

The series was, once again, 5 close games, but this time in favor of New York. Chandler continued his success with 2 complete-game victories: Game 1 by 4-2 and the decisive Game 5 by 2-0.

The Cards yet again, this time against the other St. Louis team, the Browns. If that name doesn’t ring a bell, it’s because they moved to Baltimore in 1954 and became the Orioles. The Browns, in their 52 years in St. Louis, were, simply put, the worst and least successful team in baseball. They won one pennant (this one) and finished second twice, 3rd five times, and 5th four times; the other 40 years were spent in the second division. In 1943 they’d finished 6th with 72 winds; this year they managed 89 wins to finish first by one game. The only way to explain it is that the league was weaker because so many players were in the military; this is borne out by the Browns, after a respectable 81-70 in ’45, falling back to 66-88 in ’46 after the war was over.

Musial had another stellar season for the Cards at .440/.549/.990; this was good for only 4th place in MVP voting, though his numbers were much better than those of the winner, teammate Marty Marion. Perhaps some writers didn’t want to give it to him two years running. Cooper had another great year though the entire starting rotation was excellent. The Browns’s best player was starting pitcher Nels Potter, who was close to replacement level his whole career other than ’43-’45. The only names on their roster I recognize are Al Zarilla and Vern Stephens, who became Red Sox and played important parts in their epic pennant race against the Yankees in ’49 (David Halberstam wrote a great book about it), and Joe Schultz, who as Jim Bouton’s manager with the 1969 Seattle Pilots, was a character in an even greater baseball book.

For all that, it was a good series with some great performances (the Browns’s first baseman George McQuinn hit .438/.609/.750) and mostly very close games, but when the dust had settled, the Cards won 4-2. The Orioles would eventually win their first championship in 1966, sweeping the Dodgers (beating Koufax, Drysdale, and Osteen), with a team that included Jim Palmer, Boog Powell, and both Robinsons, Frank and Brooks.

The Cubs overtook the Musial-less Cards by three games to reach the series behind the hitting of Stan Hack and Phil Cavaretta (hitting, not slugging: 8 home runs between them), and uniformly great starting pitching. The Tigers finished a game and a half ahead of one of the Senators’ few good years. Their starting pitcher Hal Newhouser had his second consecutive MVP year, going 25-9 with a 1.81 ERA. Hank Greenberg was back from the service for half the season and hit .311/.404/.544.

The Series didn’t go according to form as far as pitching goes: Newhouser got knocked out of game 1 (7 runs in 2+), and wasn’t terribly effective in games 4 or 7, though he won both. The Cubs’ great pitching did earn two shutouts, but also got lit up for 7, 8, and 9. It did go according to form with the Cubs losing again, for the 7th time since their previous victory in 1908. They wouldn’t be back in the postseason until 1984 or back in the Series until they finally won it in 2016.