Big Jim vs The Corona 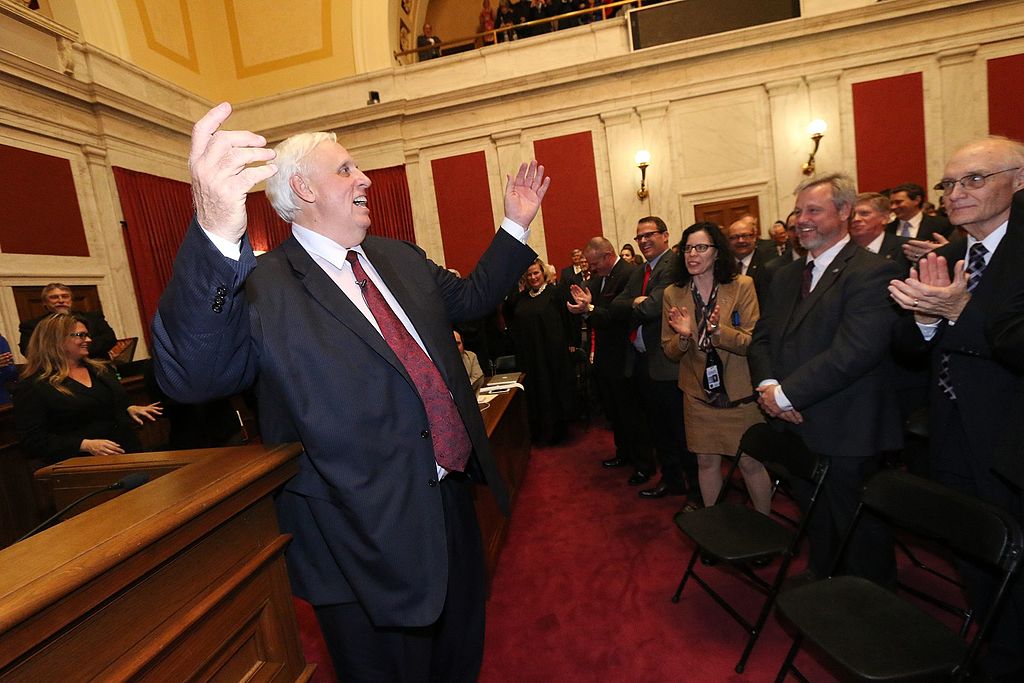 When West Virginia’s governor, billionaire coal baron and Greenbrier Resort owner “Big Jim” Justice speaks, the proud residents of our state hold our breath to see what sort of colorful (read: embarrassing) babble will come out of his mouth this time. And due to the Covid-19 pandemic, hearing his thick, exaggeratedly accented speech has become a daily thing.

He is known for his folksy antics; this is the man who brought a silver platter of literal bullshit to the state Capitol Rotunda to express his opinion of that year’s proposed budget. He is alarmingly large – 6’7 and, I’d venture to guess, at least 400 pounds – earning him the moniker of “Big Jim” from close personal friend Donald Trump. He was briefly a Democrat when he won the governorship in 2016, then promptly switched back to his native Republican at a Trump rally in West Virginia in 2017.

Big Jim sounds like a cross between a dumber Sheriff Andy Taylor and a fire and brimstone country preacher, speaking slowly and emphatically as though speaking to children, in a thickly Appalachian accent. There is a Jim Justice speech bingo card circulating on Facebook containing his oft-used phrases, such as “for crying out loud”, “in any way, shape, form, or fashion”, and beginning a sentence with “now…”

He has been criticized for not spending as much time in the capital as one would expect from a governor, refusing to move into the Governor’s Mansion and instead spending his time at the Greenbrier a couple of hours away. This is probably contrary to state law that requires the governor to reside in Charleston, but a lawsuit challenging his residency failed (he claims that his mobility issues make the mansion unfit to be his full-time residence.)

Despite his absenteeism, he has been quite present as the pandemic has taken hold. Ours was the last state to confirm a diagnosed case of COVID-191, but the governor did implore residents to practice social distancing, ordered the schools closed and imposed restrictions on visitors in nursing homes even before the first case was announced. Then again, he also went on TV last week and told people “if you want to go to Bob Evans and eat, for crying out loud, go to Bob Evans!” even though, at that point, no one should have been going to Bob Evans.

We all thought the shut-down order was coming last Saturday evening, when a 7pm statement from the governor was announced. He had said we would only hear from him over the weekend if there was some big news or important change. So naturally, folks swarmed the grocery stores, again, in preparation for the lock-down. Instead, we got a rambling, incoherent speech from Big Jim that resulted in nothing but head scratching and hilarious memes. Skip ahead to the 5:20 mark, if you decide to watch. The gist: All the king’s horses and all the king’s men knew a Tsunami is coming, we don’t want to be like New York, thousands may die, so we must do something. For every day we wait for the tsunami, many will die. So what we are going to do is just this: We are not going to do anything.

The shut-down order eventually came the following Monday and there has been a press conference every day since. Jim does his rambling, and then we hear from the state’s health officials. His message today, in addition to the good news that residents can fish for the next thirty days without a license, was a stern warning to New Yorkers.

Yes, a stern warning to New Yorkers. He says they probably see West Virginia as a safe haven to which they can escape. But, he says, any New Yorkers who decide to come here better self-quarantine themselves for the required 14 days, and he means it; he doesn’t know what he can do if you don’t, but you better!

It’s a hard time to be a leader right now. I’m going to give Big Jim a solid C+, but that’s mostly due to the work of the health officials around him who are guiding most of the decisions. Closing schools and restricting visitors to nursing homes before we even had a confirmed case may have helped in stemming the tide from this tsunami he keeps talking about. We now have 51 cases in the week since the first was announced, and that number will surely grow by the day’s end, but it is still one of the lowest in the country. Hopefully we can keep those New Yorkers from coming down here and infecting us all; if they do, they’ll have Big Jim to deal with.

How well is your local government handling things?