A Simple Breakfast Sandwich That Feels Like Someone Else Made It 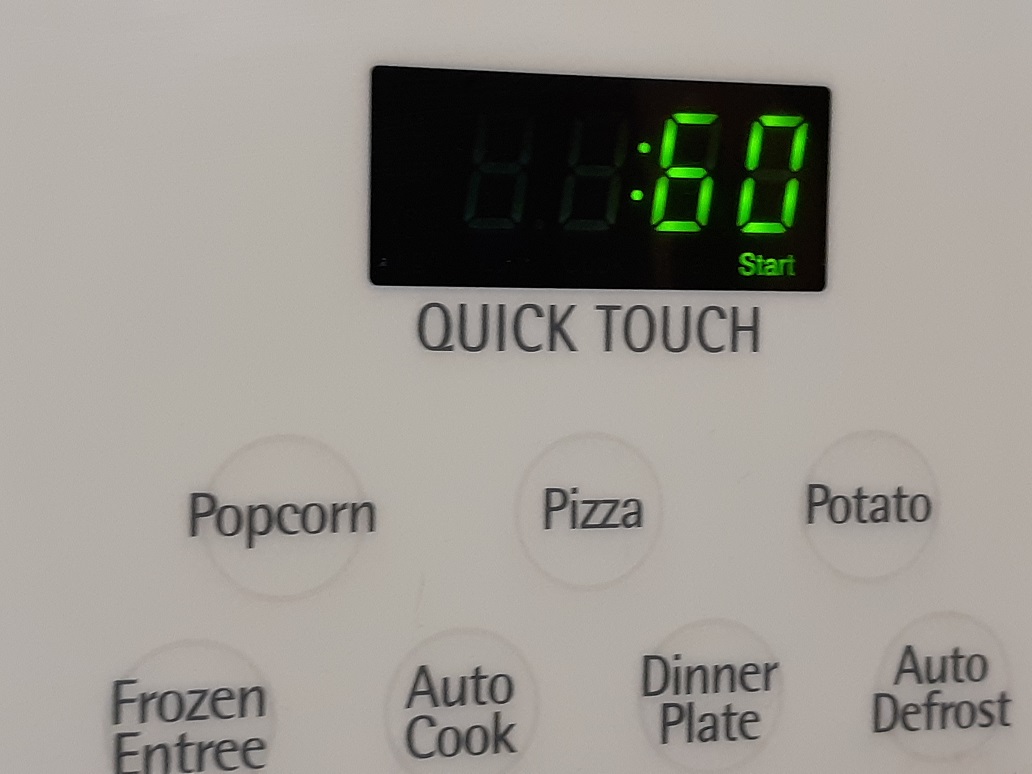 This is a simple little breakfast sandwich that is fun and easy to make and it only has a handful of pre-reqs.

Second: Buy a few pounds of bacon. GOOD bacon. Go to the butcher section and ask for the thick-cut bacon. I like pepper bacon but I’ve also had jalapeño bacon (not as good as it sounds) and other people I know just like the straightforward mesquite. But get the thick-cut stuff. Now pre-heat the oven to 400 degrees. Now get a cookie sheet and put a layer of aluminum foil down in that to act as a reservoir. Now get a cookie cooling rack in there. Now put the bacon on the cookie cooling rack (I can usually get 8-10 strips of bacon on mine) and bake the bacon for 30 minutes (or however long you prefer your bacon to be done… some people like the bacon still floppy, some people want it done CRISP.) Watch the first batch like a hawk and make note of how long it took to make the perfect bacon… then cook the rest like that. When all of the bacon is done, cut it in half. You can turn a long strip of bacon into two short strips of bacon and, since you got the good stuff, each 1/2 piece feels like a full piece of bacon. When this is done, you’ll have little strips of bacon to put on sandwiches, burgers, and, yes, breakfast stuff like what we’re making here.

Third: Get a microwave egg clamshell like this one. 8 bucks from Amazon. Seriously: IT’S WORTH EVERY PENNY. I probably use that little thing more than any other device in my kitchen. 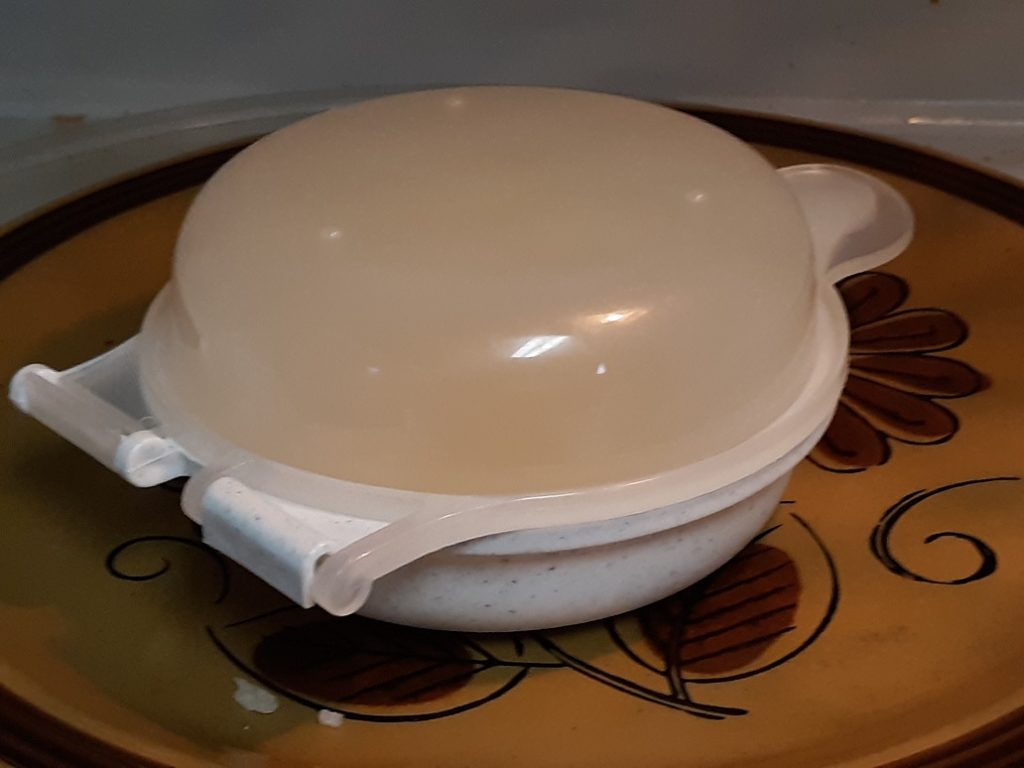 Okay. We’ve got the pre-reqs behind us.

First, get yourself an English Muffin. 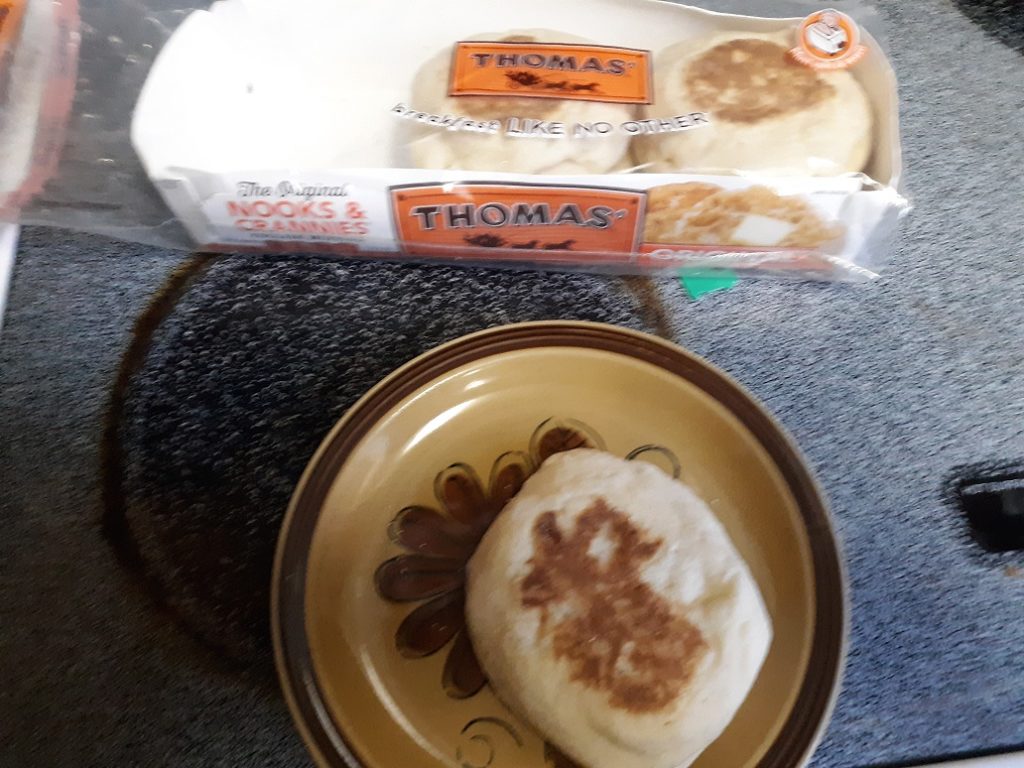 Then split it and toast it. While it is toasting, get your other ingredients together: Two 1/2 strips of bacon from when you made it last time, an egg, some cooking spray, and some shredded cheese. 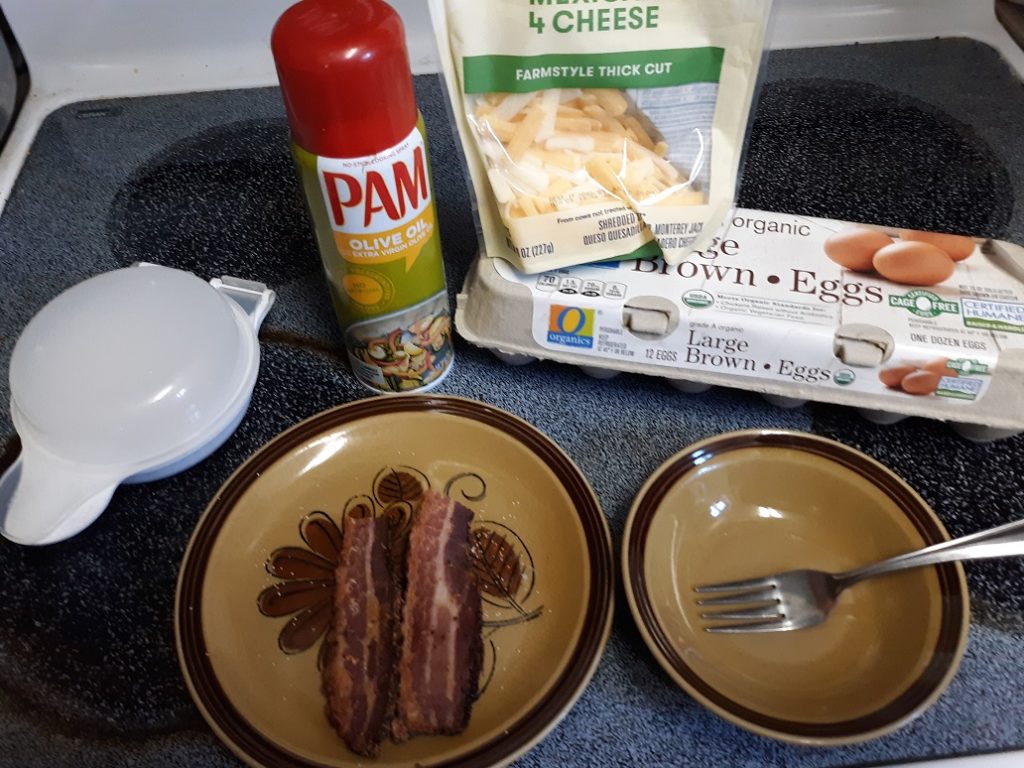 When the English Muffin is done toasting, put some cheese on it: 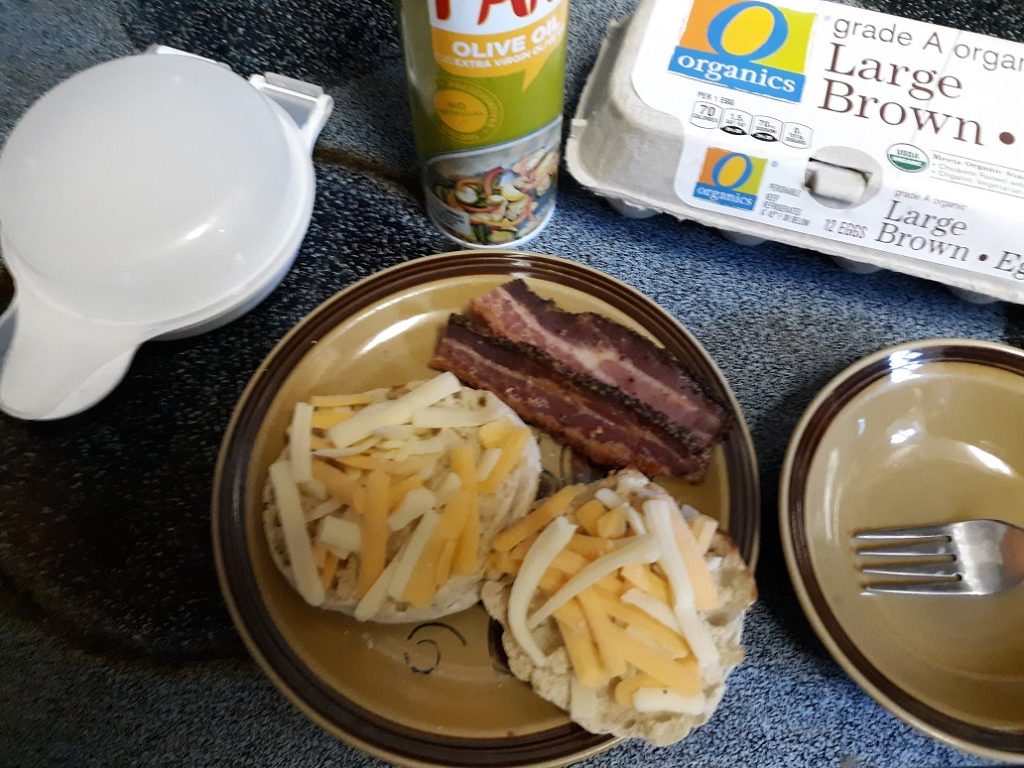 Now put the two halves of English Muffin under the broiler: 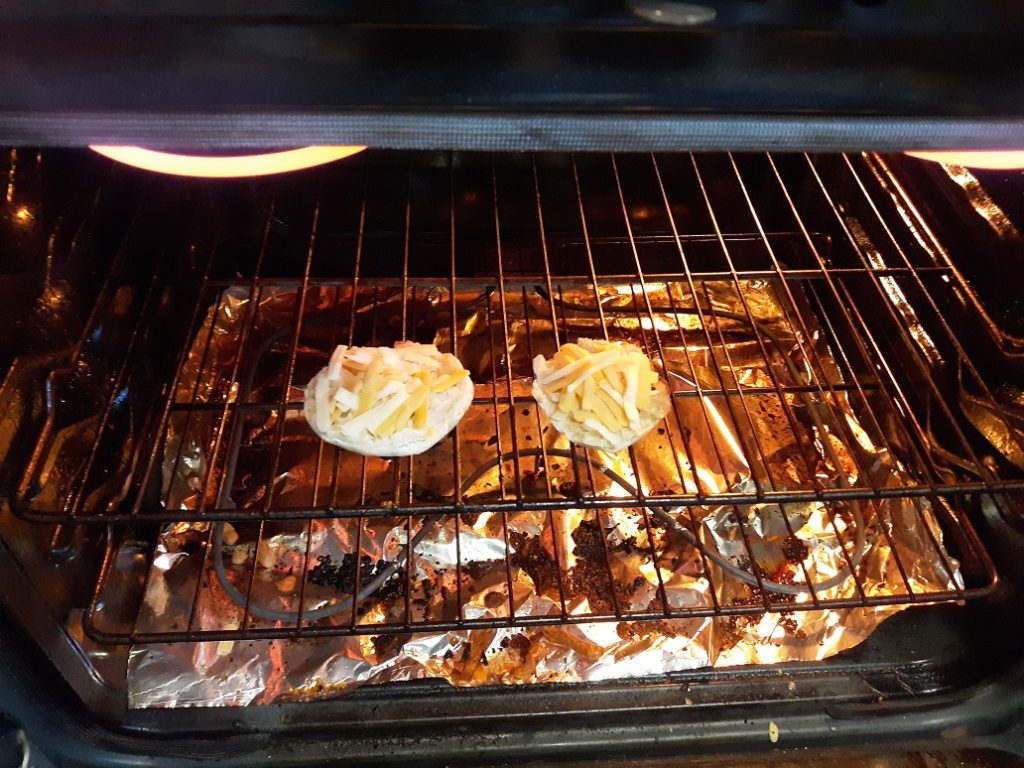 While that is broiling, crack an egg into your whipping bowl: 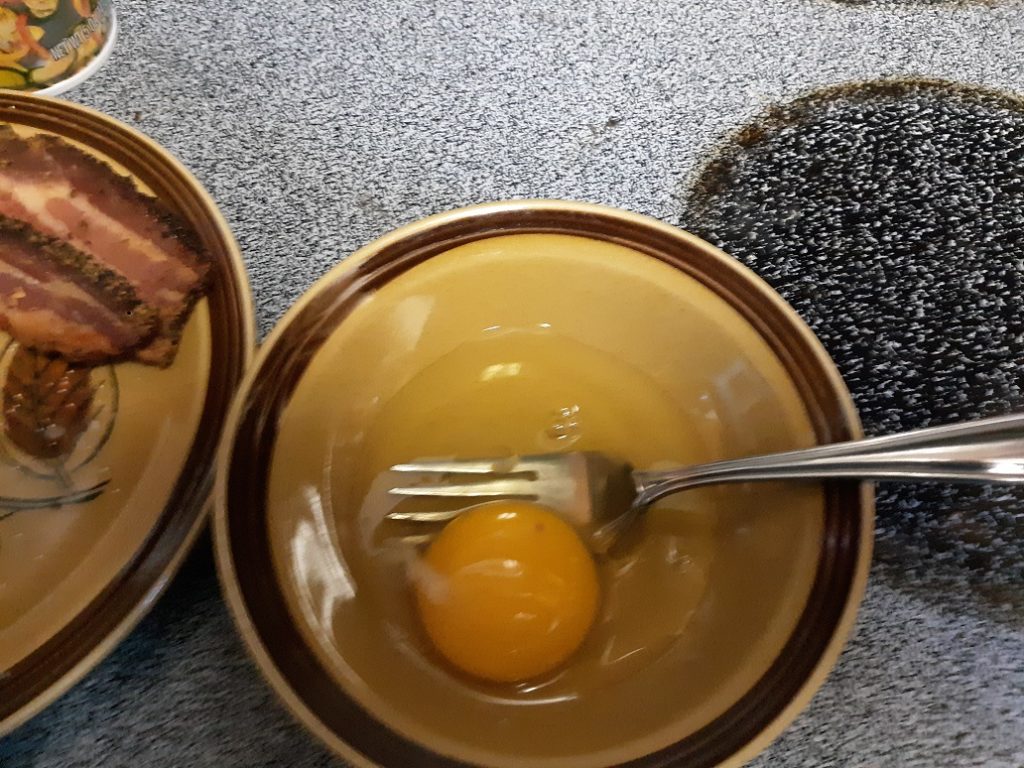 And then whip it: 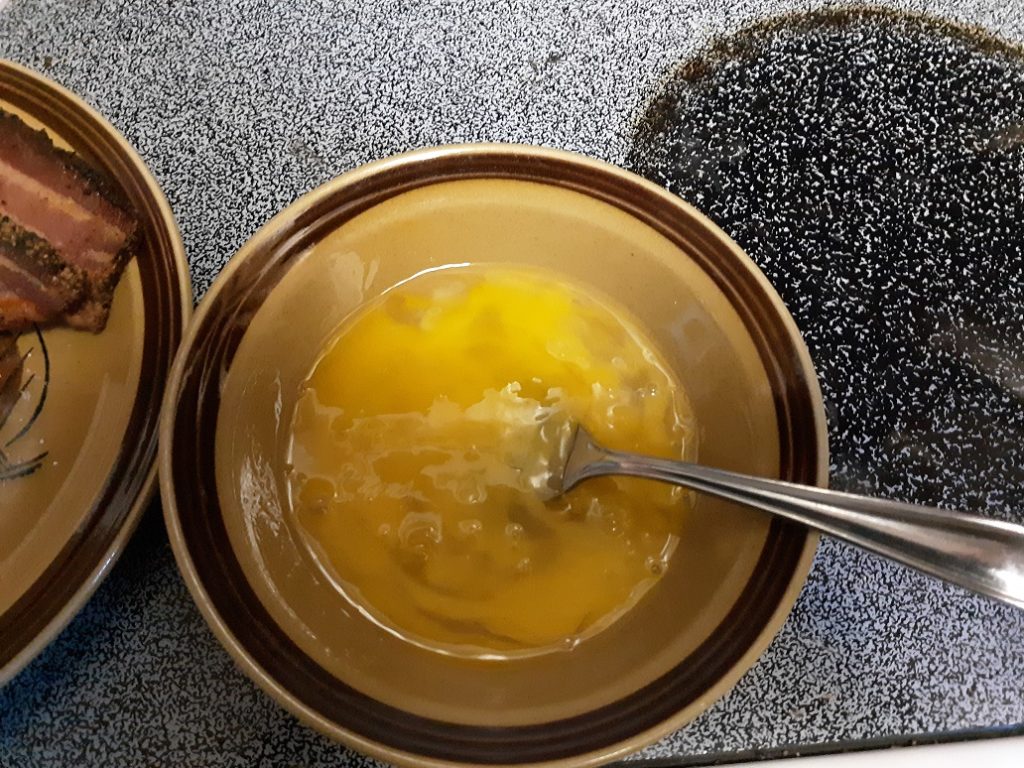 Give your clamshell a hit of cooking spray: 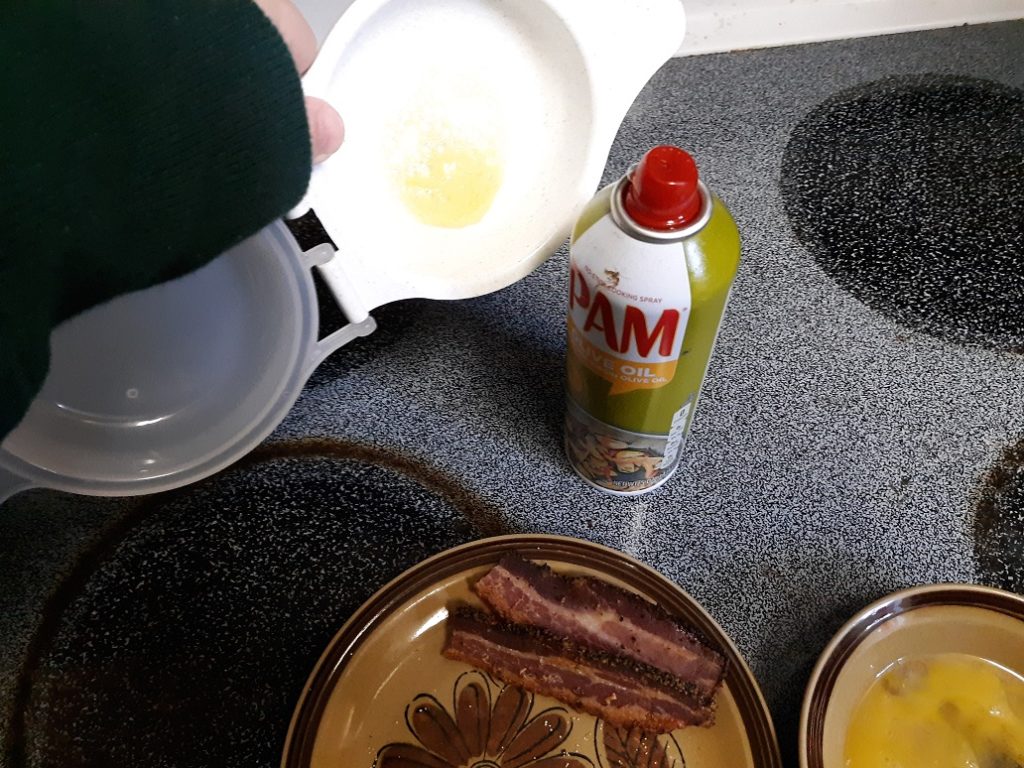 And then put your whipped egg in the clamshell. 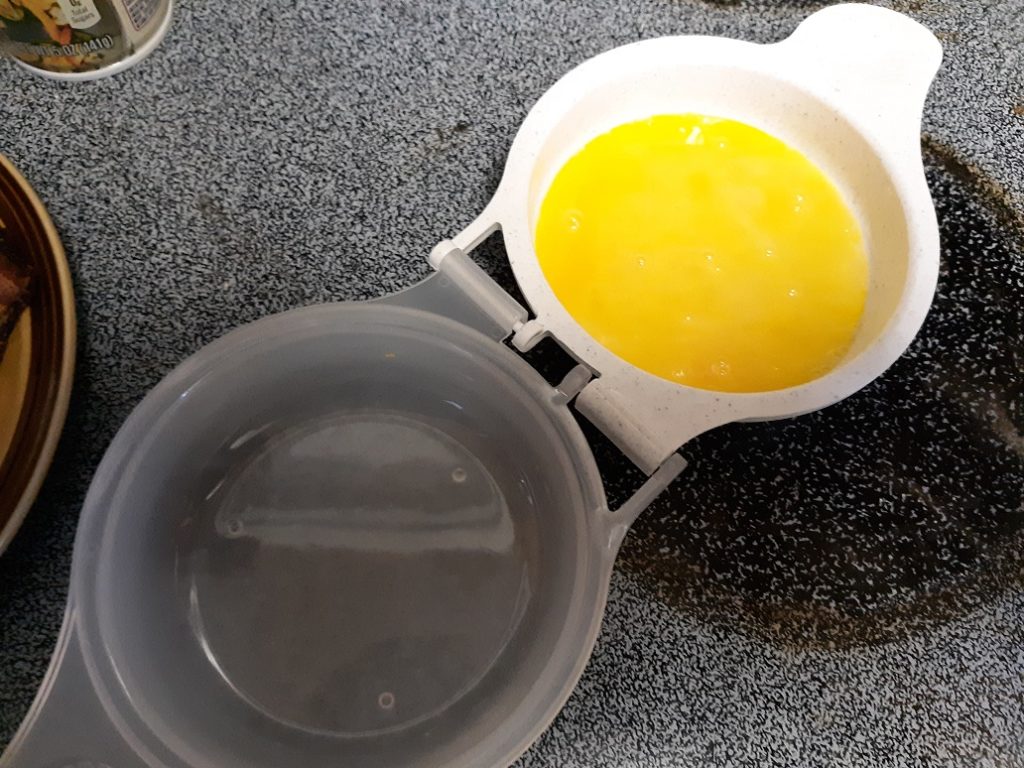 Then close the clamshell.

Then, put your bacon on top of your now melty cheese in under the broiler to heat it up and bring some of the oils to the surface: 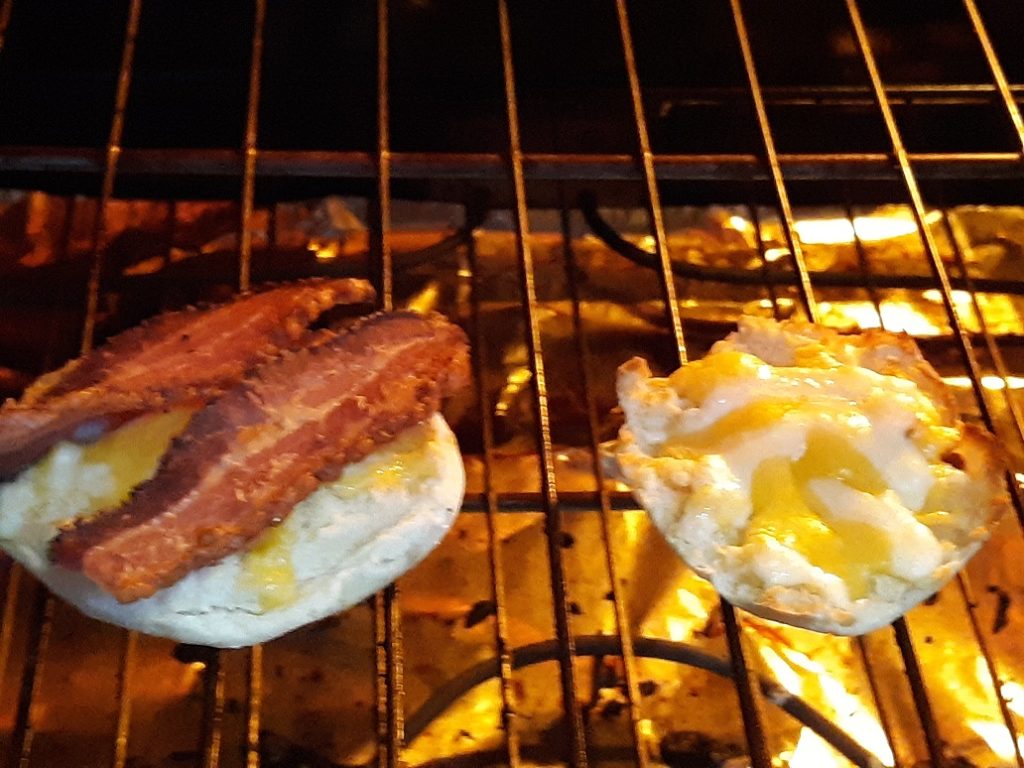 And then put the clamshell into the microwave for a minute 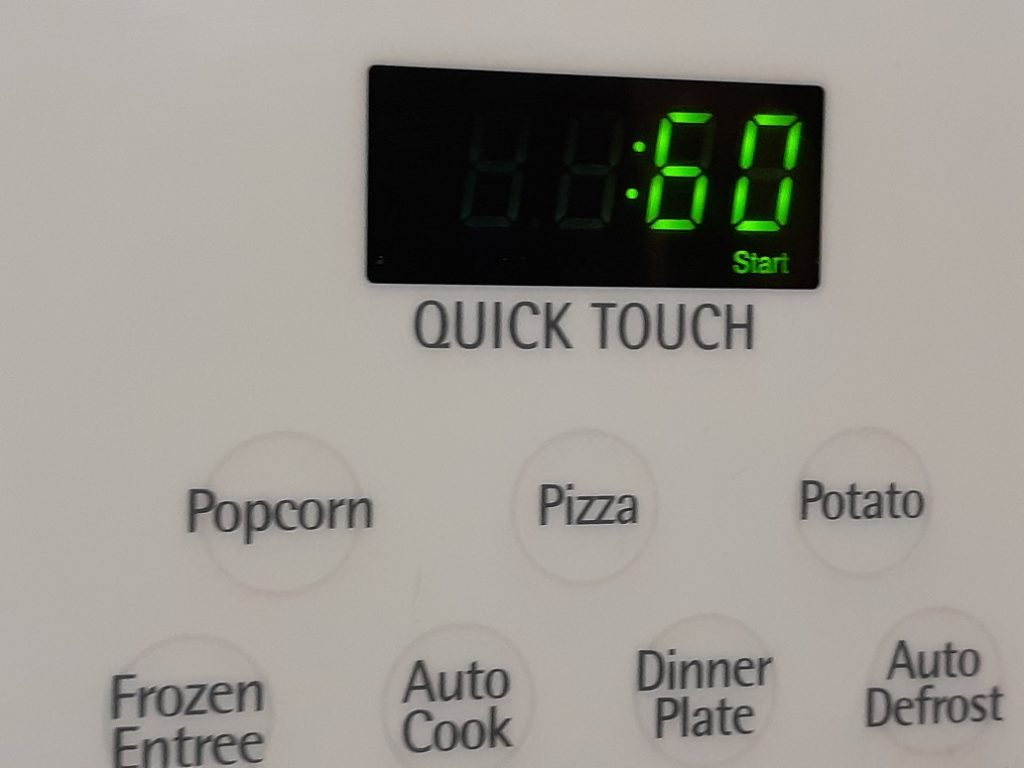 And, when the timer gets down to around 10 seconds or so, plate your open-faced bacon sandwich and then, when the microwave dings, put your egg on it: 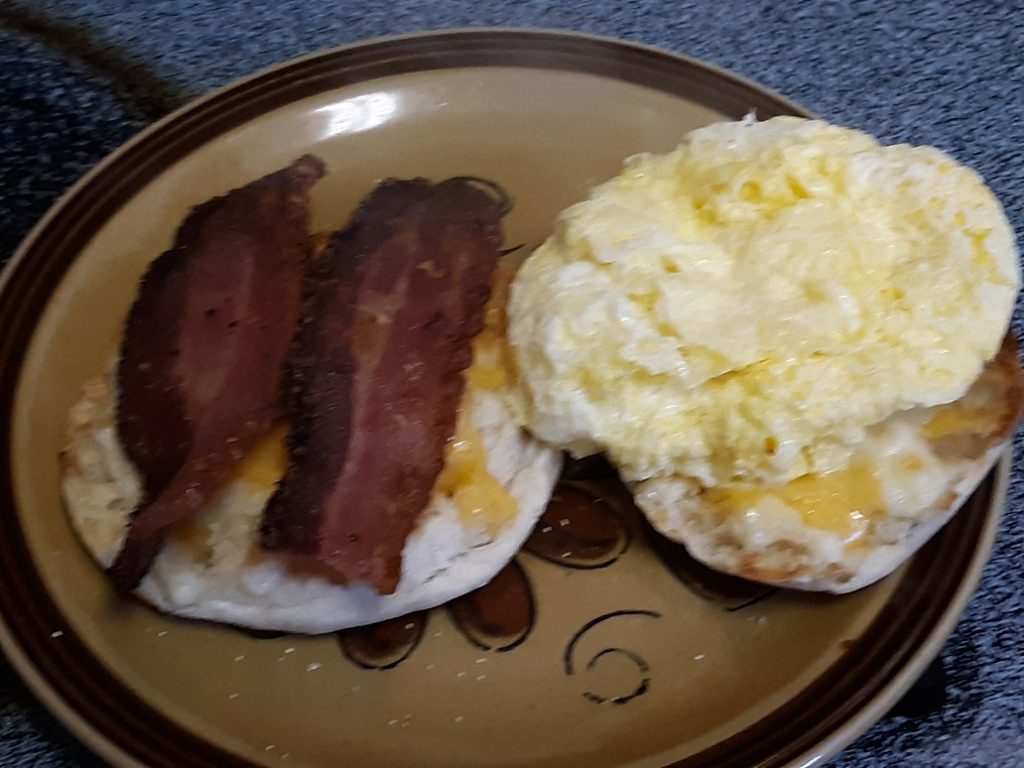 Close your sandwich and you’ve got a pretty good sandwich with minimal effort (though, granted, a lot of pre-reqs). 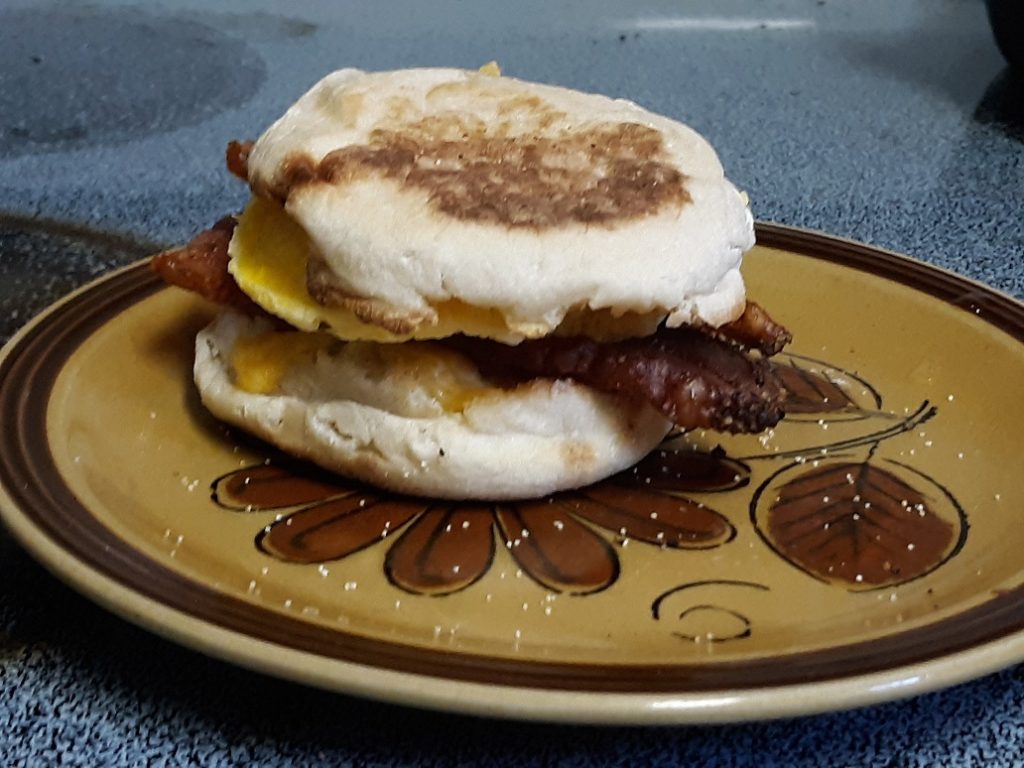 That only took you… what? 5 minutes to make? Not even?

If you prefer sausage patties, use those. If you prefer not having any meat at all, just do the egg and cheese. Heck, swap cheeses out. Today, Havarti Dill! Tomorrow, Philadelphia Cream Cheese! If you’re lactose-intolerant, keep the egg and bacon and substitute orange marmalade for the cheese. There is a LOT of room for variance in there.

But the recipe you see above is more or less what I make for myself when it’s Saturday and I want something really good, really quick, and is easy enough to make that even someone with a mild hangover won’t be able to mess it up too badly.