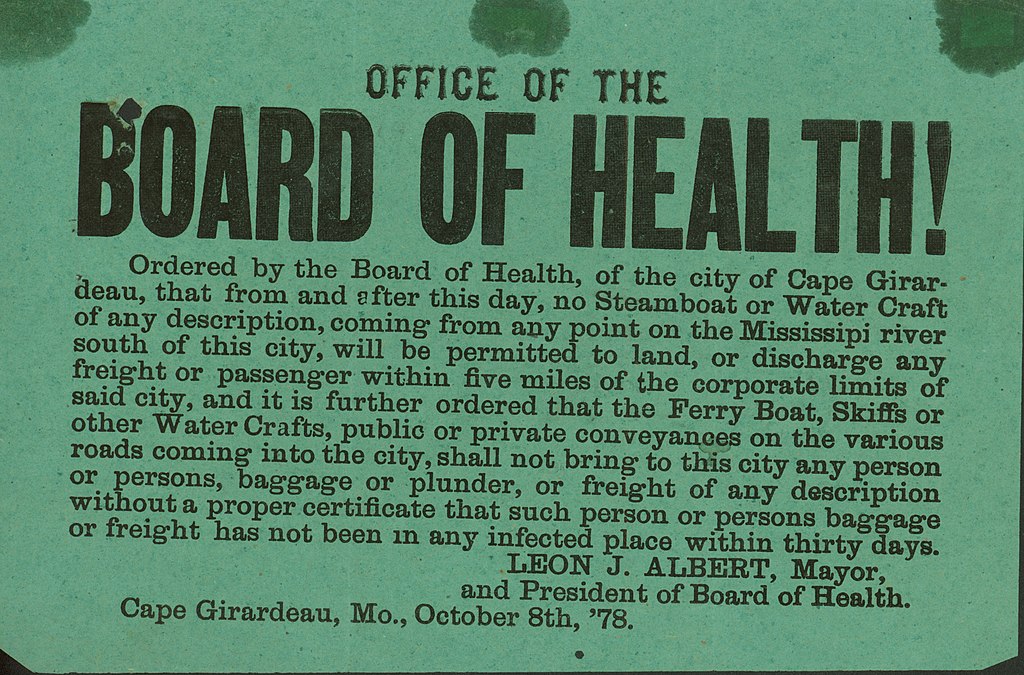 Quarantine notice and city ordinance restricting landings of steamboats or other water craft at or near Cape Girardeau, October 8, 1878 [Public Domain]

L1: For over a century spanning the late 1700s through early 1900s, the city of New Orleans battled the periodic scourge of the mosquito-borne disease, Yellow Fever. The illness claimed the lives of thousands. Some years were particularly bad, such as 1853 when it claimed the lives of 8000 of the city’s residents. Once the mosquito was identified as the cause of the transmission, the incidence of disease slowed and then ceased1.

In the meantime, the city reeled with economic struggles after each outbreak, with businesses closing, unemployment up, services reduced and overwhelmed. In an effort to contain the disease, quarantines were declared in various localities in Louisiana, especially near the coast, an authority given to the state Board of Health by law. In addition to keeping the infected from leaving their parish or town, the statute also declared “The State Board of Health may, in its discretion, prohibit the introduction into any infected portion of the state, persons acclimated, unacclimated, or said to be immune when in its judgment the introduction of such persons would add to or increase the prevalence of the disease.” So, no one out, and also no one in.

In 1898, the same year the law was passed, the ship Brittania made its way to the Port of New Orleans, by way of France and Italy, with passengers and cargo, having been verified as disease-free at a quarantine station prior to reaching New Orleans. There were 408 passengers, some of whom were US citizens, and some of whom were not. Despite having been declared free of infectious diseases, the Board of Health refused to allow the passengers to disembark or for the cargo to be unloaded:

Referring to the detention of the S.S. Britannia at the Mississippi River quarantine station, with 408 Italian immigrants on board, I have to inform you that, under the provisions of the new State Board of Health law, section 8, of which I enclose a marked copy, this board has adopted a resolution forbidding the landing of any body of people in any town, city, or parish in quarantine. Under this resolution, the immigrants now on board the Britannia cannot be landed in any of the following parishes of Louisiana, namely: Orleans, St. Bernard, Jefferson (right bank), St. Tammany, Plaquemines, St. Charles, or St. John. You will therefore govern yourselves accordingly.”

The edict cited a resolution from the Board of Health, which invoked the authority given to it by the new statute and “Resolved, That hereafter in the case of any town, city, or parish of Louisiana being declared in quarantine, no body or bodies of people, immigrants, soldiers, or others shall be allowed to enter said town, city, or parish so long as said quarantine shall exist, and that the president of the board shall enforce this resolution.”

Furthermore, said the Board of Health agent, if the ship would attempt to dock anywhere near New Orleans, that area would be declared in quarantine as well. The ship was forced to sail on to Pensacola, Florida to unload.

The company operating the Britannia, Compagnie Francaise de Navigation a Vapeur, felt as though the ship was being singled out by the actions of the Board and filed suit. The plaintiffs argued that since the Board was imposing no such restrictions on Italian immigrants who docked in New York and came to Louisiana by rail, the Board’s edict was unfairly targeting their ship (for reasons that are not clear.) The company asked for an immediate restraining order of the Board’s actions, but the court denied their request.

The company claimed the Board’s actions violated federal law and claimed damages incurred from having to reroute to Florida and sought around $10,000. The Board moved to dismiss the case for lack of cause of action, and the motion was granted. The dismissal was upheld on appeal in the Supreme Court of Louisiana, giving rise to our case of the week, Compagnie Francaise de Navigation a Vapeur v. Louisiana State Board of Health.

Justice White wrote for the Court. The plaintiff argued that the statute in question violated the constitution because it gave a state regulatory board the power to interfere with interstate commerce. The Court recognized the interest of states in protecting its citizens and managing disease via quarantine. So while the Court could not deny that the law necessarily affected commerce, it did not find it an improper usurpation of federal power, unless and until Congress imposed quarantine laws of its own which were incongruous with those of the state.

The Court also rejected the contention that the law violated international treaties by disregarding the certification by France that the ship was disease free. The treaty in question arose from the Louisiana Purchase, and obligated the United States to treat France “upon the footing of the most favored nation in the ports of the ceded territory”. The US had a treaty with Greece which provided for the reciprocal acceptance of documentation of a ship’s lack of contagion. The Louisiana Purchase agreement would require France to be given the same consideration. But the Court disagreed, holding that even accepting the argument that France must enjoy the same benefit as Greece, the treaty in question expressly provided for the imposition of quarantine.

Finally, the Court was likewise unpersuaded by an argument that the state’s quarantine law violated US immigration law. The decision of the state Supreme Court was therefore upheld.

L2: Questions loom about the delayed elections in the midst of COVID-19. Here’s what the Supreme Court has had to say about the authority of state governments over national elections– spoiler alert: not much.

L3: Maryland prepares to arrest those in violation of the governor’s shutdown orders.

L4: In Kentucky, a man who tested positive for COVID-19 says he won’t comply with quarantine – his house is now guarded by armed law enforcement to keep him inside.

L5: Martial law: What is it and how do current state actions compare?  What it isn’t: a new Eminem album.

L6: Ohio’s primary election postponement will likely be battled out in court.

L7: “Criminals, could you maybe not right now?” – Colorado Sheriff.