The Berning at Waterloo 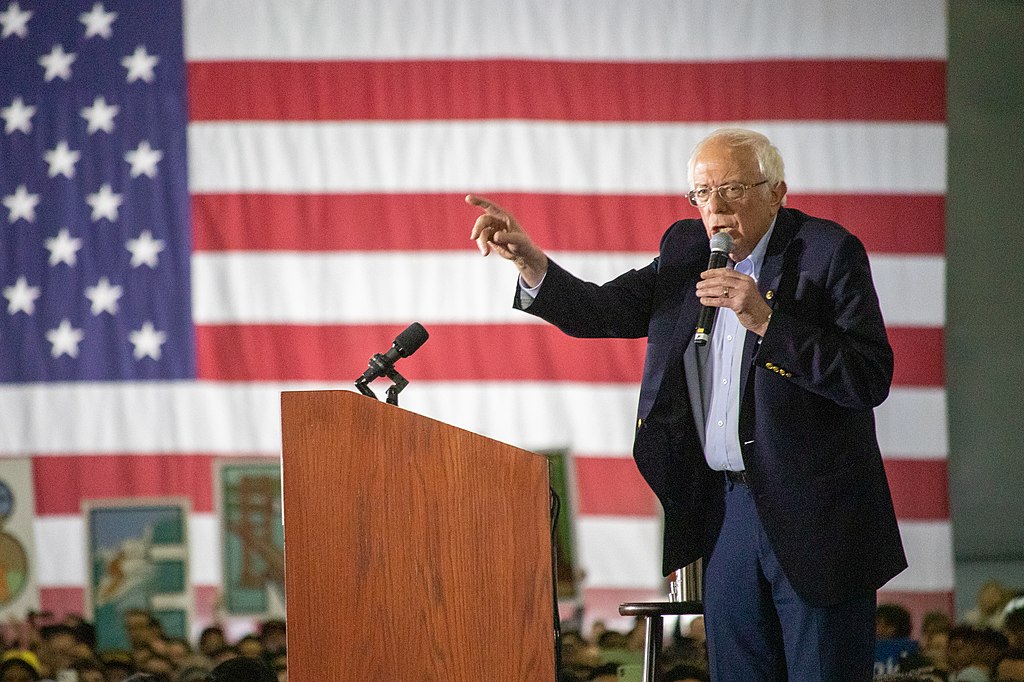 Photo by Σ via Wikimedia Commons

Mercifully, the marathon of scheduled Democratic debates for this primary season is now coming to a close. Eleven of these, if you count the two double-headers that started off the campaign for the presidential nominee as one each, have now come and gone. Nearly 30 candidates whittled down to the two who were leading from the beginning. Joe Biden and Bernie Sanders were the only two candidates left, despite soon-to-be non-officeholder Tulsi Gabbard having a sad over the 7th place candidate in a two person race not being included. Wisely, the DNC did not acquiesce to her request.

This debate was also different in that it was held in a studio with no audience. The reality and optics of the coronavirus moved the festivities from Arizona to DC, and only the moderators were on camera with the candidates, though CNN elected to bizarrely have them stand at lecterns anyway. Maybe it was the social distancing, maybe it was the plan B slash C part 2 since the debate had to be rearranged. But the whole vibe was rather deadened.

Then again, to be fair, this race has been over for two weeks. Super Tuesday slammed the door on Bernie Sanders the candidate, the premise, and the viability of his movement nationally inside the Democratic party. As Biden pointed out in the debate, the strong turnout that came in places like Virginia, North Carolina, Texas, Minnesota, and other places was not Sanders’ long promised revolution, but brought the Biden campaign back to life after a lackluster cycle. Now it’s just playing out the string.

And Bernie Sanders knows it.

After Super Tuesday, Sanders made remarks at his campaign headquarters, but it felt more like a list of things he hoped Joe Biden would agree with him on, rather than a battle cry to defeat the former Vice President.

Putting “Joe” in front of your existing and well-worn campaign points, only in the form of a question, is not a bold new strategy. But, then again, rehashing well worn and marginally effective strategies is Bernie Sanders’ core skill set.

It’s over for Bernie, and while not exactly taking it lying down he isn’t going to do much more than meander along for a bit longer. He wasn’t about to hit Joe where it hurt, much like he laid off Hillary Clinton and stuck to his stump speech points instead of attacking any of the weaknesses that would prove fatal later to Donald John Trump. Tellingly, Bernie’s most memorable moment was giving Hillary all kinds of cover with his “Nobody cares about the damn emails!” line in a debate. He didn’t even get one of those out of this debate, his one and only run at Joe Biden. Oh sure, he spent 10 minutes making Joe reset his mental computer live on TV as the former VP tried to figure out a way to get around past stances on cutting Social Security before opting for the straight up lie, but that isn’t going to change the primary math. Bernie did what he did before, and took the “L” without ever leaving his comfort zone of talking points.

It was Waterloo for Feel the Bern. But it wasn’t even the Waterloo of historical fame, of Napoleon and Wellesley and some 140K plus troops deciding the fate of Europe. Of the normally tactically brilliant Emperor of France escaping exile only to make error after error until his final defeat in the place that became synonymous with failure. Of the course of history changing in a single afternoon.

No, this is more like Waterloo, the ABBA song.

Back in 1974, while Bernie was on his way to a 3rd place showing in the Vermont Senate race under the banner of the Liberty Union Party, ABBA exploded to stardom at that year’s Eurovision Song Contest. Having finished third in their Swedish qualifier the year before, Stig Anderson, Bjorn Ulvaeus and Benny Andersson used Napoleon’s defeat as a metaphor for love, wrapped it in a catchy jingle, and rode it to stardom and some six million in single sales. Unlike the soggy, bloody field in Belgium, this Waterloo was a happy jaunt into a losing battle that ended mostly how both parties wanted it to anyway.

That’s Bernie Sanders, who spoke the language of the revolutionary but never quite got to the part where anything was interrupted or made too uncomfortable for the very system that had made him a millionaire after a lifetime of public service. His revolution has always been one of the path of least resistance, of always being the lone voice on the outside because that is what best suited him. The lovable loser fighting the impossible battle, the outsider whom others wouldn’t dare let in, the dreamer warning against the inevitable. You could sing right along “The history book on the shelf, is always repeating itself” watching the Sanders campaign once the swing to Biden began after South Carolina. We saw it before, when Bernie was the protest candidate against Hillary Clinton in 2016 yet refused to actually try to wound and fight the all-but-coronated HRC when given the opportunity and stage to do so. His shtick only works when he is the second place, playing the underdog, the oppressed, the righteous outsider, and falls apart when actual electoral success is within his grasp.

Bernie Sanders doesn’t even seem upset about it. Far from attacking Joe Biden, again and again in the debate he tried to lead Joe into policy discussions on his favorite topics. Other than the social security exchange, Bernie didn’t draw blood in any meaningful way. Not that it would matter, but someone who has been running for president for five years straight, you would think, would have some fire and fight in their last moments on the national stage outside of their endorsement speech for the winner at the convention. Instead, you got the same old rage curmudgeon prattling on about billionaires and Medicare for All while Biden sailed through by just being Joe Biden.

“So how could I ever refuse,” harmonized ABBA on the bridge before launching into the chorus one last time: “I feel like I win when I lose.” Bernie works only as the oppressed, done wrong, and unfairly relegated loser. The true believers who have picked him as their avatar will not be doing any self-reflection, because the cause can not fail, only be failed. There have been and will continue to be howls of how the DNC “rigged” things, or shut down the primary once Biden gained the lead. Some suggest there is a cabal of big business and the DNC managed a multi-layered conspiracy against Bernie Sanders, despite the fact that after 2016 they let him and his campaign help write the very rules that turned this Democratic primary into a baseball team-sized circus for months on end.

The truth is that after winning New Hampshire, winning Nevada, and doing well in whatever that was in Iowa this year, the Democratic party — en masse and in record numbers — turned out to consolidate the party behind Joe Biden. It wasn’t corporate money, as the Biden campaign was too broke to even make ad buys for Super Tuesday before South Carolina happened. It wasn’t the mostly hapless DNC that has been a passenger more than a driver of this primary process. It was Bernie Sanders never expanding his core support, never changing or modulating his messaging, never having a second or third pitch past class warfare, and not rising to the opportunities he had laid before him to be more than just the outside radical agitating for change. His supporters will continue to claim they win when they lose, but the party has spoken and moved on already, and few are going to listen. Meanwhile, Bernie is going on to his inevitable defeat and he has no one to blame but himself.

“At Waterloo Napoleon did surrender. Oh yeah” goes the song, and Bernie Sanders will meet his inevitable destiny in quite a similar way, for the second presidential campaign in a row. The Democratic Socialist will sing songs about it, but doubtful they will be as catchy or memorable as Waterloo. The song, or the battle, for that matter.

“Oh, oh, Waterloo, finally facing their Waterloo”… But Bernie is happily singing the same old song as if it was all inevitable, and ending exactly how he wanted and planned. Not that those who Feel the Bern will admit it. They’ll just wait for the next time a Democratic Socialist exile escapes from the island the Democratic Party tried to keep them on and tries to take over the world. Or the next catchy song from a Swedish power pop group. Democratic Socialist just love those Nordic countries and their systems, after all.