Thursday Throughput: Are We Alone Edition? 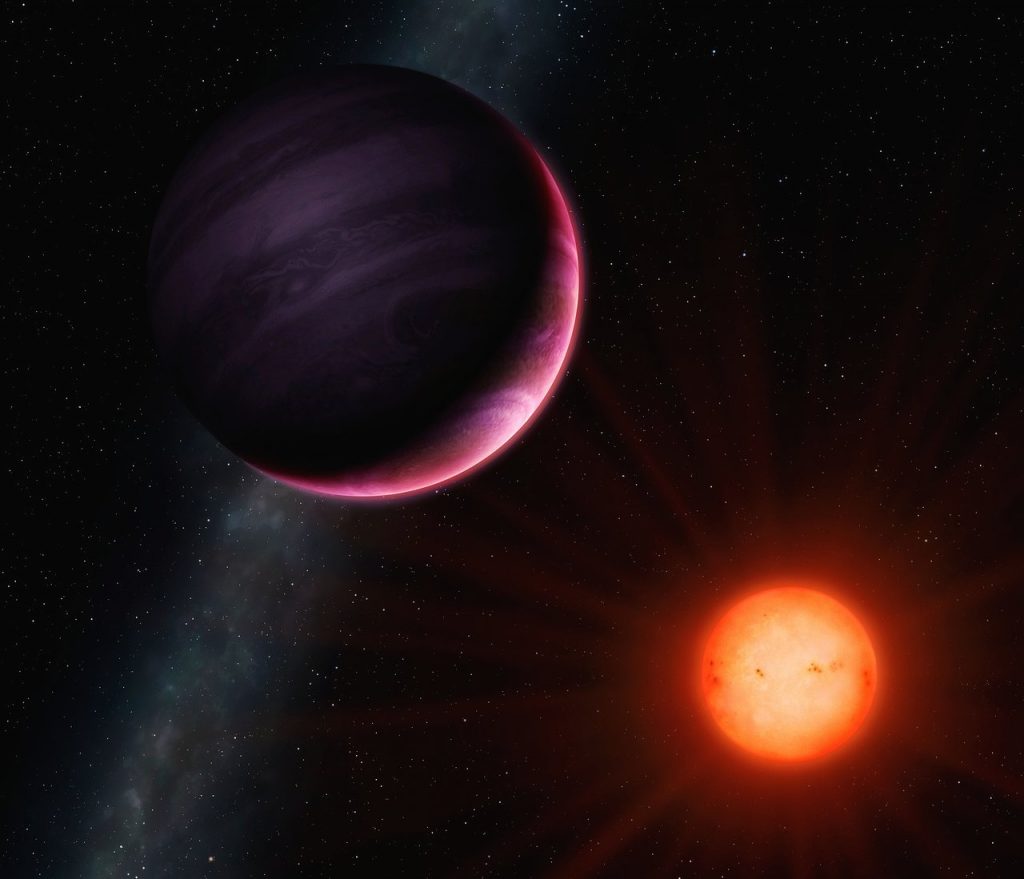 Artist’s impression of the planet NGTS-1b, the first to be found using the NGTS system at ESO’s Paranal Observatory. This planet is a hot Jupiter, at least as large as the Jupiter in the Solar System, but with around 20% less mass. It is very close to its star – just 3% of the distance between Earth and the Sun – and orbits the star every 2.6 days, meaning a year on NGTS-1b lasts two and a half days. Credit: ESO/University of Warwick/Mark Garlick

[ThTh1] Our Ask an Astronomer this week comes from our very own Em Carpenter, who asked me about one of the more important questions not just in astronomy but in the human experience: are we alone?

Humans have been searching for evidence of life outside of our planet pretty much since we understood there were other planets. From 19th century astronomers speculating about canals on Mars to modern day science-fiction, we have had a bit of an obsession with the subject. But what does the science say?

Well … it says a few things. Almost six decades ago, astronomer Frank Drake formulated the Drake Equation, a formula for calculating how many alien civilizations might be out there trying to communicate with us. The formula goeth thusly:

The Drake Equations has been criticized by many people, notably Michael Crichton, who said:

The problem, of course, is that none of the terms can be known, and most cannot even be estimated. The only way to work the equation is to fill in with guesses. And guesses-just so we’re clear-are merely expressions of prejudice.

Nor can there be “informed guesses.” If you need to state how many planets with life choose to communicate, there is simply no way to make an informed guess. It’s simply prejudice.

As a result, the Drake equation can have any value from “billions and billions” to zero. An expression that can mean anything means nothing. Speaking precisely, the Drake equation is literally meaningless, and has nothing to do with science. I take the hard view that science involves the creation of testable hypotheses. The Drake equation cannot be tested and therefore SETI is not science. SETI is unquestionably a religion.

I think Crichton was overly critical1. Many of these factors are, in fact known. The number of stars in our Galaxy is well-known. We now have a very good idea of how many planets are out there and a pretty good idea of how likely those planets are to be in the habitable zone. Even using fairly pessimistic assumptions, we estimate there are several hundred billion potential life-bearing planets out there.2

The last four parts of the equation are entirely speculative. We have no way of knowing them. But here’s the thing … you can be really pessimistic about those numbers and still come up with a couple of dozen alien civilizations out there. The sheer number of planets in our Galaxy makes the existence of extraterrestrial life very likely. And the number of planets in our Galaxy — indeed the Universe — is not speculation; it is increasingly solid hairy fact.

Of course, those civilizations may be tens of thousands of light years away, so we may never hear from them and they may never from us (or maybe, given the time delay, we’d hear from each other long after our civilizations have died). In the end, the Fermi Paradox suggests such civilizations are rare.

On the other hand, if you cut that definition of life down a bit, the chance that we are not only not alone but we will one day know we aren’t becomes more likely. We know a lot more about early Mars than we used to and it’s looking like it may have had the conditions for very primitive life to evolve. We know that moons like Europa have deep warm subsurface oceans. We may never find little green men out there. But the possibility of finding microscopic, single cell or maybe even multicellular life within our own solar system has barely been explored. Maybe we’ll find it when NASA’s mission to Europa happens. Or maybe we’ll find it in the form of freeze-dried orbital fish.

[ThTh5] Another day, another killer asteroid story. This asteroid is incredibly dangerous. But its orbit is well known through the next century.

[ThTh6] The good news is that, by the time this happens, our Sun will have died, our species will be long gone and everything you know will be dust in the cosmic wind.

4 billion years from now, our galaxy, the Milky Way, will collide with our large spiraled neighbour Andromeda. Here’s an animation of what it’ll look like pic.twitter.com/HxFkTQFFFR

[ThTh8] Nietzsche said order comes out of chaos (actually he didn’t, but …)

Neat example of how order can emerge from chaos: sorting this box of nails.https://t.co/OL9pddlSsJ pic.twitter.com/ivnM5m6H5g

[ThTh9] I’m really not sure what to make of this result indicating that distant galaxies are moving together.

[ThTh10] Scientific American is claiming that ending fossil fuel subsidies would cut greenhouse gas emissions by a quarter. Color me extremely dubious of this claim. The demand for fossil fuels isn’t going anywhere. If you cut subsidies, the price will go up. But we’ve seen oil prices at two or three times what they are today and it hasn’t suppressed demand that dramatically.

[ThTh11] Mars is seismically active. At least, in its own small way.

[ThTh12] I recently mentioned the Trillion Trees initiative. A new paper suggests the carbon dioxide reduction this would produce was vastly overestimated.

[ThTh13] Whales beach themselves more often when the sun is acting up. No one really knows why. Which reminds me that I need to book my summer vacation.

[ThTh14] I’ve been critical of plastic straw bans. It turns out that you could do the ocean a bigger favor by not recycling your plastic.

[ThTh15] So, some new research indicates that we have been vastly overestimating how much greenhouse gas emissions come from biogenic sources and vastly underestimating how much comes from the production of fossil fuels. Maybe I’m being a pollyanna but this crosses as a really good news. Because greenhouse gas emissions from fossil fuel production — methane leaks in particular — are something we can address pretty easily. Slaughtering all the cows is not something that’s going to happen any time soon.