Tenacity, Thy Name is Superfection 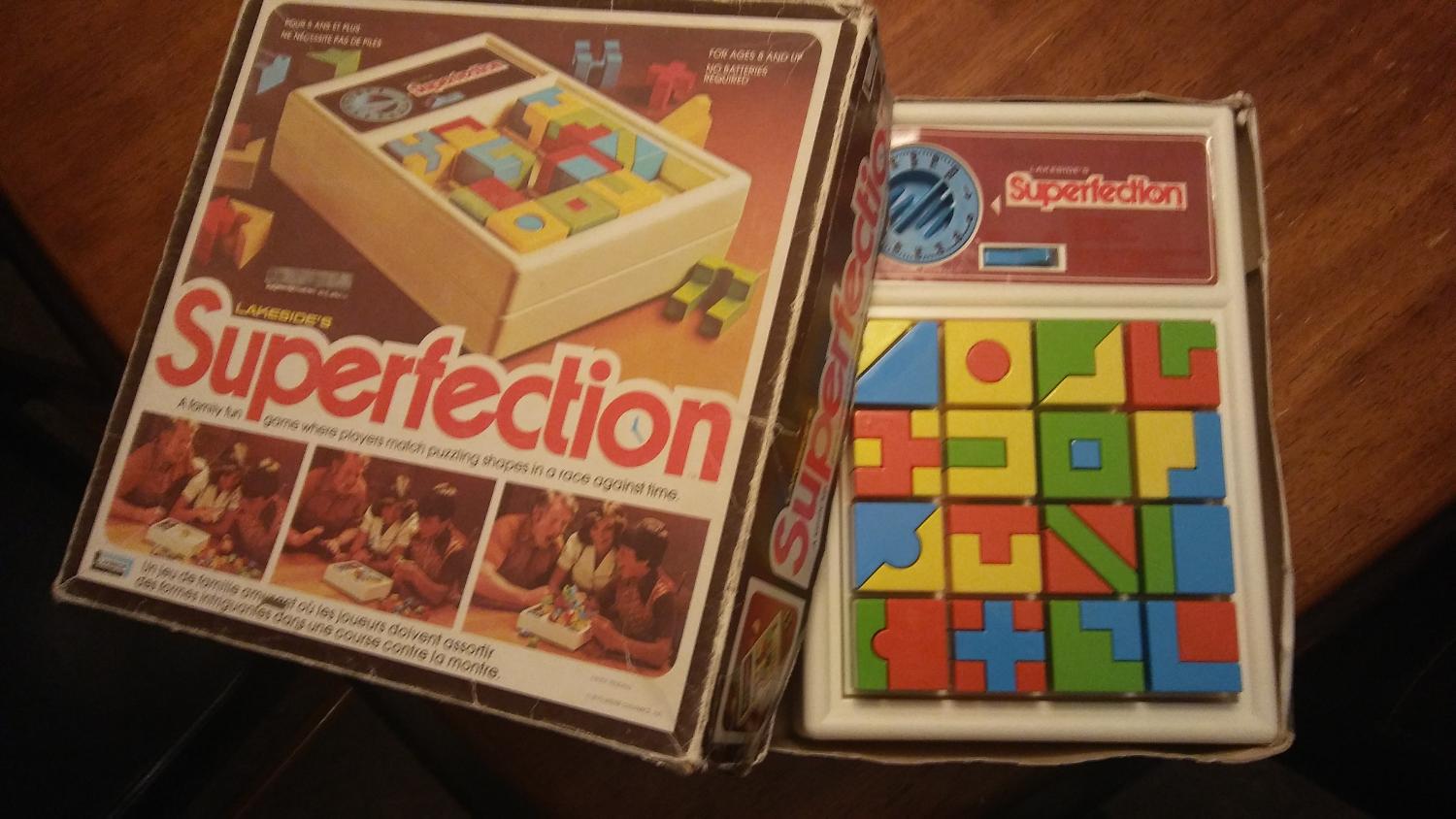 Into this void came the game Superfection. You probably played or heard of the game Perfection growing up; it had these pieces you fit into little slots in a set amount of time and if you did it too slowly, the game board popped up in a terrifying fashion, not unlike the horror that is a jack in the box. The pieces scattered and you had a minor heart attack, or a major one if you were prone to anxiety like I was.

Well, Superfection took that concept to the next level, having a set of puzzle pieces you had to assemble and then slide into place before the entire gameboard exploded.

I hated Perfection. While I didn’t own the game myself, I encountered it at other people’s houses, people who’d had all the time in the world to play the game and learn what pieces went where. Since I’d never had a chance to practice it, I had no chance to win. And since I was pretty good at games of skill and won more than my fair share, my playmates relished the chance to pwn me at something, and thus were always suggesting we play Perfection since they knew I’d lose.

For some reason, probably because it was something that a child could play alone without bothering people who would rather be going out on dates, that first tense and strained post-divorce Christmas one of my parents bestowed upon me a game of Superfection. It was even harder than Perfection. I tried it and despised it for all the same reasons I hated Perfection to begin with – it was too scary! I can still hear the horrible plastic rattling of those game pieces launching themselves skyward when the timer ran out. I had enough turmoil and anxiety in my life right then, so I put it in my closet and there it sat for a good long while.

But I kept looking at that box every morning as I got dressed, and thinking about Superfection. Surely, I thought, surely a company wouldn’t have made a game that was IMPOSSIBLE. Surely, I thought, there would have been a massive outcry and people, even people as clueless as my parents, would have refused to buy an impossible game for a child. Surely, surely, there was some government agency or consumer safety bureau that looked out for innocent unsuspecting kids like me and prevented the sale of unwinnable games. Surely Lakeside Games would not have invested oodles of money in making and advertising a game that everyone would hate.

Thus I reasoned, Superfection could not be impossible. It had to be possible to win the game, or they wouldn’t have been selling it to people. It wouldn’t have been on the market because no one would buy a game that couldn’t be won.

And if it was possible, that meant I could win it.

Maybe it was just the lack of control I was experiencing in every other arena of my life right then, but once I realized I could win, I felt like I HAD TO. I tried the game a few times with the timer set and it was awful. Putting the pieces together the right way was tough. Several of them were nearly identical in form but they only went together one way. Others were uniquely shaped and easy to match, but the pairs were harder to fit together. I despaired, because I’d undoubtedly die of terror before I learned how to assemble them all. Maybe Superfection WAS possible, but it wasn’t possible for a squirrel-hearted lily-livered ‘fraidy cat like me.

As I wiped the sweat from my brow and my heart rate returned to normal after yet another dispiriting loss, I had a revelation – I didn’t have to set the timer. There was no law, other than the directions that came with the game, stating that I had to set the timer. As a born rule-follower (you may have noticed I got over it) the very notion of disobeying the directions felt subversive, nearly undoable, but I didn’t see how else I could learn to put the pieces together without dying of fright.

So I started practicing, just the pieces, no timer. I realized that the colors of the pieces weren’t just decorative, they were actually hints to how the puzzles were assembled. All those seemingly identical pieces were different colors, and could only go together in certain combinations. Once I cracked that, it was just a matter of practice. It only took me a few minutes till I got confident enough to give it a try with the timer set, and though I failed the first several times, it wasn’t so scary any more. I could see success there dangling in front of me only 15 seconds away. Inspired, I kept at it and I mastered the game by the end of the afternoon. Much to my surprise, not only did I beat the game, eventually I found I could actually win it before the timer had gone even halfway. Not only was the impossible possible, I could excel at something I had once truly believed I was incapable of.

I have repeated the steps I went through learning to beat Superfection many times in my life. Encountering something that seemed insurmountably hard, but then reasoning my way into believing it couldn’t be impossible, courageously giving it a whirl, figuring out what rules to break, unraveling the secrets to beating the game (whatever the game may be), and mastering it. In fact, the very next thing I did after my Superfection triumph was approach learning my multiplication and division facts in the same methodical, “this has to be possible because other people do it” way (sad, but I was still very shaky on my math facts even well into the 4th grade — going to 3 different schools in 18 months will do that to a person) and I’ve done it many times since in various arenas of life. The lesson of Superfection was of critical import for me because I’ve always been surrounded by people who either told me I couldn’t do something, or told me I had to do things in certain ways, insisting I embrace methods that may have worked for other people at the expense of finding strategies that would work for me.

I think it’s probable, indeed likely, that the sort of rational tenacity I drew upon to win Superfection is part of my being, and if not Superfection, I’d have encountered some other low wall to scramble over at roughly the same age that would have revealed it to me. It’s probable, indeed likely, that even without Superfection, I’d have learned to throw away the directions and figure things out for myself.

But it WAS Superfection that imparted that life lesson and for that I’ll always be grateful.

If other people do it, so can I. I just have to find my own way.