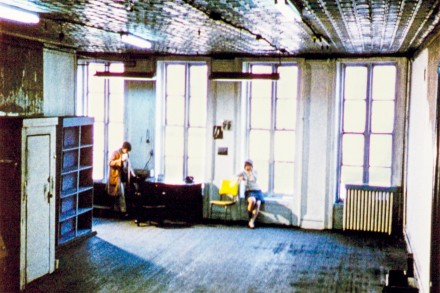 When I told my roommate, who is an artist and ardent cinephile, that I was going to see an exhibition of Michael Snow’s 1967 movie “Wavelength” at the Art Gallery of Hamilton this week, she said: “I think I’m going to skip it; I’ve never been very much into experimental films.”

“Oh,” I replied, “I didn’t know it was an experimental film. I’ve never heard of the movie, or know anything about Michael Snow.” In fact, all I knew was the name and date of the film, that it was going to be shown in 16mm, which I like, and that the Village Voice called it one of the 100 best films of the 20th century. Otherwise, I had no foreknowledge.

I like to do this sometimes. It’s very hard to encounter art as directly as purely as it was in the pre-Internet era. I see people in our record store all the time browsing through the albums and looking them up online in order to hear more before buying them. It makes me nostalgic for the days when we would scour the shelves at Tower Records for anything that had an intriguing cover with no idea what might be in store. Now, when you listen to music, or watch movies, or encounter art, it’s almost always after you’ve read the full bio of the creators, poured over blog posts debating its worth, and had your opinion shaped and poisoned in countless ways.

Of course, I still couldn’t get around the context: the AGH screened the movie and they clearly see Michael Snow as an important Canadian artist. The crowd at the screening was on the older side, but the gallery always brings out the blue hairs. There was the usual bar, so that we could all drink wine, or soda in my case, or bottled water supplied by Mercedes Benz for some unfathomable reason.

We sit down and the programmer Ryan for the AGH tells us that this is one of his favorite movies of all time and he’s seen it around 20 times and this print looks and sounds great. Also, Michael Snow is in attendance and will be answering questions after the screening. The film begins with a shot of a room in what looks like a New York loft from a fairly high angle. There is a road outside and passing traffic. There is a woman directing two men bringing in a bookshelf. She comes in with another woman and they listen to a song on the radio- it’s Strawberry Fields Forever by the Beetles.

The camera slowly zooms in on a picture on the wall between the windows. Other things happen in the meantime: night turns to day, the image flickers and changes between different colors, a man breaks in and is shot, a woman calls the police, and we finally get to the picture on the wall: a photograph of ocean waves. This is all one slow zoom that takes the entire 45 minutes of the film.

Except, of course, it’s not. A 16 mm camera can’t shoot for 45 minutes. Besides, these are different film stocks, different gels on the lens, different times of day, and other very obvious manipulations of the image. Maybe this was what is meant by “experimental”- the filmmaker manipulates and warps the image, plays games with its time and narrative. When the man is shot, it barely registers. Snow said he wanted the brief images of people to seem like half-buried memories. The flickers are a natural effect of film. Some of the strangeness of the film is pure happenstance.

Because the film is not “experimental” in the sense of being ad hoc; everything in it feels very controlled. The shot struck me as the perfect image of that room. It is the best angle for an ideal composition. In fact, it feels like an abstract painting with the repeated shapes of upright rectangles and other straight lines. Snow was a painter before branching out into film and one of the paintings on the wall is his. He apparently worked in nearly every medium. There is also the fact that editing the film together would have required a great deal of precision to maintain the illusion of a continuous zoom.

The sound in the film I found abrasive. As the film is a zoom inward, there is an electronic drone that goes from the lowest audible sound to the highest audible sound. In fact, I found the film itself abrasive at times. Sometimes, it was quite beautiful, but it’s inscrutability bothered me. I didn’t know what to make of it. I knew it was evoking an emotional response, but I had no idea what one. It seemed to bring out the full spectrum, from amusement to irritation to a sort of aesthetic delight. I can’t imagine watching it on a computer screen because it would be too tempting to fast-forward or turn the sound off. It was first screened by the great artist of film, Jonas Mekas. Apparently, Snow didn’t get much attention as an artist in Toronto, so he went to the states and was treated much better and then accepted by Canadians. This is a shamefully common response to Canadian artists in Canada.

By the end of the film, I was almost angry. But, the strange thing is, I almost immediately wanted to make a film of my own, or paint, or write poetry. I felt giddy. In fact, I wanted to watch the movie again as soon as possible. The gallery is screening Snow’s later film New York Eye and Ear Control, which features some of my favorite musicians, Don Cherry and Albert Ayler. I will be there.

I still don’t know what to make of Wavelength. It’s the damndest thing. After I’ve seen it 20 times, I’ll be better qualified to talk about it.

So, what are YOU watching, reading, playing, creating, or pondering this weekend?