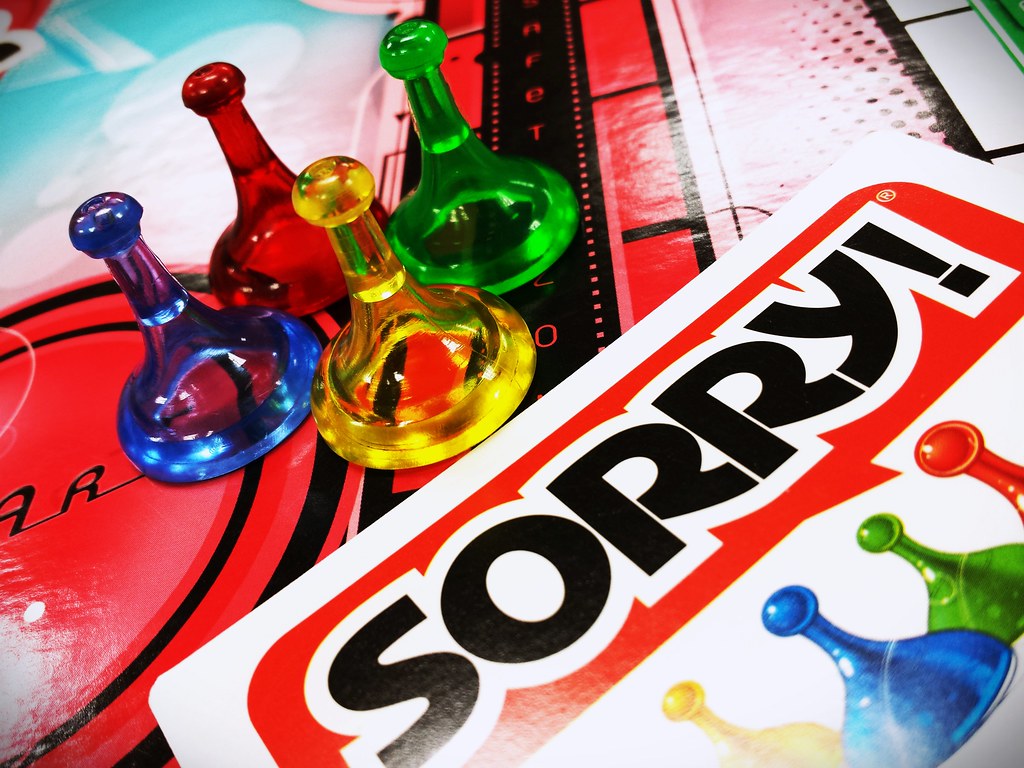 Stopping in the middle of a slide was always dangerous. It seemed all of the players looked for a piece stranded there, much like looking for an exposed man in combat; an easy target presented itself. You knew that piece needed to be moved, and moved quickly. But, as the game wore on alternate options presented themselves. “Should I forgo the piece in no-mans land and expand my resources getting another piece to safety?” “How far is the pawn ’round? Is it worthwhile to focus on that one, when my enemy is vulnerable?” The equation of life.

At least life in my family.

A game marketed for two or more players, ages 6+. A board, square with 16 spaces a side, each containing two slides, an entry to a safe zone and a spot to start from. You draw cards determine if you can leave safely, or how far you can advance clockwise. If you land on the start of one of the slides, you gain a few extra spots when sliding along it. It sounds simple, a game of genteel camaraderie.

But! Two objects cannot occupy the same space. And if another player lands on the space you are currently in, well, back to start you go, no matter how close you were to safely. Those slides? Nothing stopped on them survives another pawn that has to slide down. And as the object is to be the first to have your pieces go through safety to reach home, you start to hunt the other pieces. So the race is on. Get your pawns out as soon as possible, and knock off your opponents quickly. You count squares with each card drawn, looking to balance movement with destructive force. Oh, did I pull a card that will allow me to land on a spot taken by another player? Oh, dear me, I just landed on it.

And so around and around the board you go. As you always have to move, you go forward, dreading landing on the slide right in front of your safety zone, as that will force you to go around again, losing precious time. But! there are cards that allow you to go backwards! And to switch spots with another, or to split a turn between two pawns. And so on.

And with children, children who might start with that all-too-common sibling rivalry, this can lead to the hunter/killer mentality. You stop looking to win, but start looking to punish your little brother. A formerly friendly game quickly turns vicious. Parents laugh, watching the children develop strategies that lead to destruction of the dreaded older child or the much picked on younger.

My older brother and I often played, with the results you might imagine and that I am describing. This game is directly what led the two of us to other games of war, such as Chess, Hearts and D&D. It led to making bamboo spears down by the creek, BB gun wars. That sort of thing…

Ok, this is just getting silly. I can’t even keep a straight face typing that. While my brother and I did do some childish and dangerous things as kids, they had nothing to do with a board game. They came from the standard dynamic of two brothers, just a few years apart in age. I was looking for something gained, something lost, that I could relate back to Sorry! and it just isn’t there. Yes, there are family memories that I have of the game, but they are vague, of nominally good times.

And that is the point, really. It is just a game, it is just simple fun. Not too complex, which keeps the rules lawyers at bay. Easy to pick up on, and just as easy to walk away from. The nieces and nephews are here? Great, let’s give them a nice time. All it takes is a simple explanation, a trip once around the board, and they are off to the races. A fun pickup at a vacation rental, something to keep everyone going on those pre-holiday nights, a quick bit of competition among friends and family, you get the point.

And sometimes that is all we need and want: Not a challenge to our psyche like the Ouija board, or a sop to our greedy instincts that Monopoly fills, but just a bit of badly needed fun.

Can you really ask for much more on a moment’s notice?

I don’t think so.