They Don’t Have a Clue 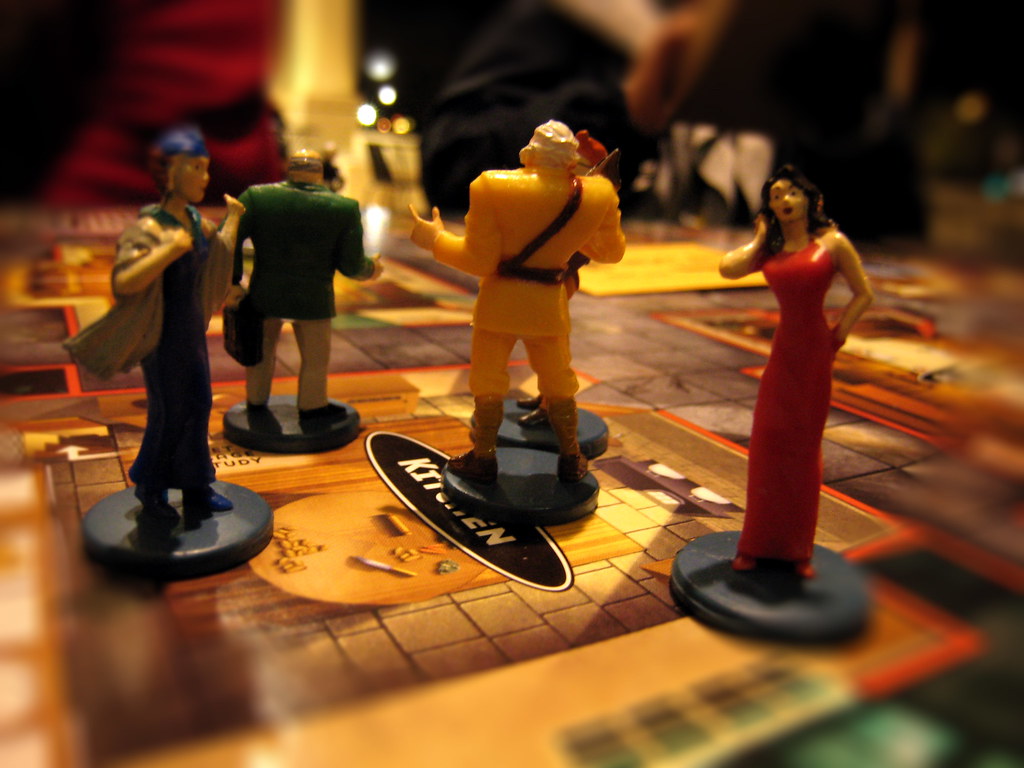 There was a murder, and justice must be done.

I saw Mrs. White in the kitchen just before it happened, sharpening the knives. She didn’t have time to do it. She’s the only one I can rule out, and I know Boddy wasn’t stabbed because there were no knives missing. And I could see into the dining room, too. Nothing happened there. This was a mystery and I swore I’d solve it. Won’t be easy to come up with an answer, though, with all these folks vouching for each other.

Oh, many have their suspicions. If we’re guessing, the smart money would have been on Miss Scarlet. That broad has been on the make for a long time, and Mr. Boddy was always an easy mark for a pretty face.

Turns out someone had an alibi for Miss Scarlet, though. And the ballroom is undergoing repairs- no one was in there. But the candlestick was still missing. Professor Plum says that particular candlestick is from the library.

How would he know that?

You just moved up to the top of my list, Plum.

I make my way over to the library. Quiet over here. Someone could be beaten to death with a candlestick and nobody would know it. And nobody spends as much time in here as Plum. He has to, to keep up his facade as a serious academic. Maybe Boddy figured out that Harvard degree was a phony. Maybe he confronted Plum and shook him down, threatened to tell, so Plum grabbed that brass candlestick, and put out his lights. It fits.

No one can clear the library. Nobody has been in there all day. We’ve found our murder scene. But Mr. Green, conveniently, produces the missing candlestick, says he borrowed it last week when the power went out. And Miss Scarlet insists Plum was in his study all day. She knows because she… visited with him. (Of course she did. If I have to clear all the men that woman “visits”, we’ll be here for days.)

Damn. Not Scarlett. Not White. Not Plum. Mr. Green, on the other hand, seems awfully quiet today. He’s not much for reading and doesn’t frequent the library — which makes it a perfect place for him to commit a murder and get away with it! But how would he do it?

Rope, perhaps.  Maybe Green hung him, or strangled him. That’s just the kind of thing he’d do. Yes, that is just what he would do. Sneak up behind Mr. Boddy in the library while he’s engrossed in his reading, slip that rope around his neck, and that’s all she wrote.

I humbly but confidently gather all the folks in the library to reveal my theory.

But Plum says rope was on the weekly shopping list, so there wasn’t any around. And then the damnable Miss. Scarlett laughs -laughs!- at my suggestion.  Says Green doesn’t have it in him, and was out of town all day besides. Her ridicule of my detective skills will not stand.

Before I can retort or get back to my deductions, Colonel Mustard pipes up. He says his gun is missing, hasn’t been seen in days. Why was this important bit of information was not offered at the outset of this investigation? What were you hiding, Colonel? I narrow my eyes at the old man in his Teddy Roosevelt cosplay garb. I begin to question him.

Just when he’s on the verge of a confession, just when I think I have him, Miss White steps in. She produces the revolver from her apron pocket. “I took it weeks ago! I thought that senile old man might up and shoot himself by accident! But you can check it. Hasn’t been fired recently.”

She’s right. Still doesn’t clear the Colonel; he’s old, but not too old to inflict blunt force trauma. I demand his alibi. He says he was in his room all day. Convenient, but it doesn’t cut the …Mustard…with me. Nobody else saw him.

I consider what I’ve proven. It happened in the library. It wasn’t White, Scarlett, Green or Plum. Boddy was not killed by rope, gun, knife, or candlestick. That leaves two suspects who may have bludgeoned him, with a pipe maybe, or perhaps a wrench: Colonel Mustard, or Mrs. Peacock.

The wrench is in my room. By process of elimination I make my reveal.

“I accuse you, Colonel Mustard, of beating Mr. Boddy to death with a led pipe in the library!”

Gasps all around. Mustard stammers his denials as Green and Plum seize him. I am just about to have a celebratory drink when Miss Scarlett grabs my arm.

“You’re not so clever, Mrs. Peacock,” she says to me. “The Colonel was with me all day.” (I sigh; of course he was.) “He was asleep in my chambers when the murder took place. Nice try, pretending you’re solving the crime — when it was you, all along! You beat Mr. Boddy to death. With this wrench I found in your room.”