X-Wing Miniatures Isn’t Just a Game, Its a Community 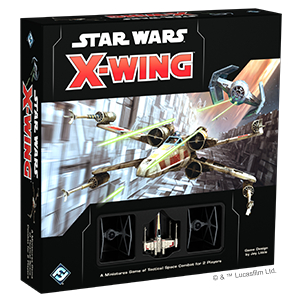 Far and away my favorite tabletop game at present is X-Wing: Second Edition by Fantasy Flight Games. I’ve been playing at increasing levels of competitiveness for 4 and a half years, and I doubt that trend is going to stop. One of the most amazing things about this game is how much time you can spend not actually playing it. There is an absolutely fascinating penumbra of activity surrounding the game itself enthusiastically engaged in by players all over the world. But before we talk about that, let’s look at the core game. At heart, this is a game of tactical starfighter combat, of making plastic ships go pew-pew. 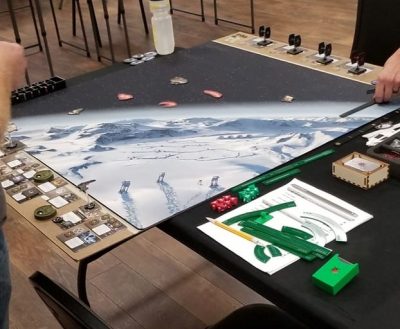 X-Wing Stuff [Photograph by the author]

When I say tabletop, I really mean it. In theory, the play area is 36 inches by 36 inches [91 cm by 91 cm for the OUS players], but in practice you need more room, because you just need a lot of stuff. You can see what I mean in the picture above. The miniatures themselves, a playmat [technically optional, but a must have accessory], movement templates, range rulers, dice, damage cards, tokens, obstacles. This is the standard game, but you can play an abbreviated edition with just the core set, which cuts this down to miniatures, dice, rulers and templates, and the damage deck. This very adaptability is a key feature. You can strip down the game to a couple of ships and play in 30 minutes, or to introduce a new player to the game. Or you can do a multiplayer version with small capital ships that might take several hours. 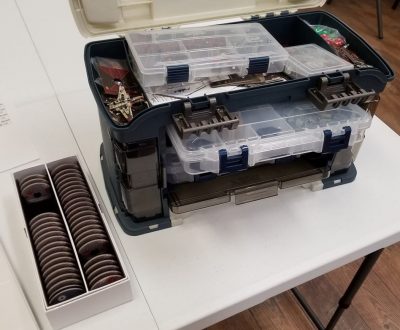 While the stuff can seem intimidating to a new player, as miniatures games go X-Wing has a fairly low bar to entry. Competitive players can end up with impressive collections of little plastic spaceships and assorted paraphernalia, but you can get started in even local tournament play for less than $100. Try that in Warhammer! Another helpful feature is that all the miniatures come painted out of the box. Many long-time players like to customize their paint jobs, but you don’t have to do this just to get started. 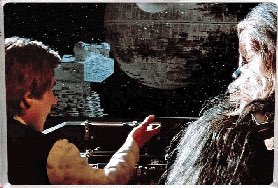 Now let us switch over to the X-Wing community. There is a prevailing ethos of Fly Casual, which encourages a welcoming attitude and the willingness to help new players learn the game, which has an impressive set of rules and mechanics to master. Fly Casual of course means many things to many people, but usually among them is a sense of fair play, a low tolerance for being a jerk, and a reminder that this is after all, just a game. Fly Casual does not however diminish the competitiveness of the tournament scene, but there are some formal rules established about just how casual an event is going to be, which determines how strictly your opponent will hold you to following the rules.

Players who mostly play at home are known as kitchen table players, for obvious reasons. Much like an iceberg, these players probably comprise an absolute majority of all X-Wing players, but they don’t loom as large in the community as their numbers might indicate. The first step into visibility is regular players at the Friendly Local Game Store, or FLGS. The FLGS is the core of the X-Wing community in real life, not only selling ships and accessories, but providing a place to play, and often scheduling and staffing league nights or tournaments. A minor undercurrent of tension is that prices in a FLGS are usually higher than can be found on the internet, as the FLGS has to pay for things internet retailers do not, but those internet retailers also don’t let you come in and play a game in their warehouse.

As we move outside of individual game stores and the community of players within them, organization moves to the internet. In my experience, regional X-Wing groups are often set-up in Facebook, but other methods are of course possible. Groups often develop distinctive characters, with inside jokes, mascots, rivalries, and memes. There are at least a couple of national fora in the United States, one in the Community section of the Fantasy Flight Games website, and another on a sub-Reddit. Twitch and Youtube provide another venue, with the ability to livestream tournament matches and allow for play-by-play commentary. Outside of the local FLGS, a lot of the action in the X-Wing community happens in these places.

Probably the top two activities engaged in to some degree by most players are list-building, and arguing over rules. List-building is a key part of the game, so much so that has come to be referred to as the meta, short for the metagame, the game before the game. The meta is a continuously evolving thing, it varies through both time and space, with local regions having distinctive kinds of lists, and varying in time as new expansions come into the game, and as certain lists do well in high-profile tournaments.

With the complexity of the game also comes a natural tendency to rules lawyering. As this is the Second Edition, the game makers have had a chance to tweak the rules pretty well, but lacuna still exist, and with the competitive nature of regional and national tournament play, everyone is looking for an advantage. However, there is also a redeeming aspect insofar as the most competent rules lawyers will gravitate into roles as judges at tournaments, with the regional and national players fora allowing for the player community to try to come to consensus when something bubbles up. Of course, since this is all rather unofficial, sometimes Fantasy Flight Games will issue an FAQ or errata that will override what the community settled, to much wailing and gnashing of teeth. As key rulings will shift the meta, what lists do well in tournament play, such things are eagerly watched. 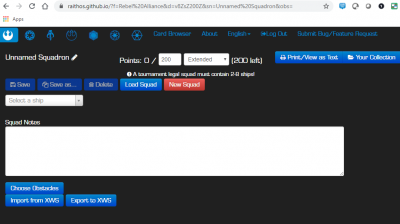 Besides these two activities, players will also post paint jobs they are particularly proud of, discuss storage solutions, organize local groups of players, generate fan content such as unofficial ships or supplementary scenarios or rulesets, discuss strategies, and so on. Sometimes, the fan generated material is a major component in how the game is played. For example, Fantasy Flight Games has a list-building app you can download, but it is notoriously buggy and not immediately updated when the periodic points changes are announced. Several alternatives exist, which have been developed by fans largely on their own time, that enable the key game element of list-building to happen more smoothly and easily. Tracking the meta has been enabled by tools that track tournament results across the world, and allow anyone to delve into the data from an easy web interface. There are even fan-made simulations of the tabletop game, for players who can’t manage to meet in person. 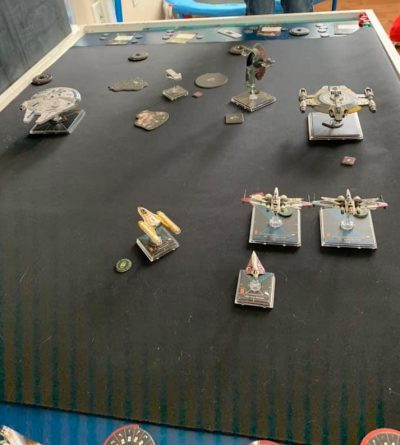 Kitchen table play at my house [photograph by the author]

You can spend quite a bit of time doing all of these things, quite separately from just playing the game. But you don’t have to, as the kitchen table players demonstrate. Some people just play the game. Everyone can play the game, or participate in the community to the degree that they like, which is the epitome of Fly Casual to me. Depending on where you live, it might be easy or hard to find a group of players at a game store to interact with. When I started playing, I stood up a group of local players, administrated a Facebook group, and helped form a community. That is the metagame I’m most proud of.
Share

Ben is a medical devices engineer who has lived in Arizona almost his whole life. He has a website and can be found on Twitter.