The Classy, Modern, and Forgotten TwixT

I like board games. If you knew me, you’d know that. Even without knowing me, if you found my blog, full of book reviews, film reviews, pen reviews, and essays on what to call Pluto, you could surmise that I’m a generally indoorsy type, and could thus hazard a guess that I’d be into board games too. When I saw that Ordinary Times was doing another symposium, and about board/tabletop games no less, I knew I wanted in on that. But what to write about? Would I tell of how one of lichess.org’s topsy-turvy chess variations has probably ruined me for playing the proper game ever again? Would I take a look at the ever-evolving form of Risk? Would I rage against the dizzying layout of the 2002 edition of Aggravation? Would I tell of a friend of mine who always has some new game with a half-hour’s worth of instructions, who helped me gain a greater understanding of board games in general, if rarely this or that board game in particular? Would I ponder whether Scrabble, the game I love to play most of all, might actually be seriously flawed in it’s board design? Or would I simply open a window into my absurd state in life as a close relation to someone who is, in defiance of all reason and everything Pascal tried to teach us, good at Yahtzee?

I like board games too much, you see, and I like too many of them. How on earth am I going to pick one to write about? And who came up with this symposium topic anyway, it’s like having a symposium on “fiction” or “textiles”. I’ve seen more specific guidance given in the puzzle category on Wheel of Fortune. What am I supposed—

And then it hit me. I remembered a game that I, like much of the world, am wont to forget about entirely, and I knew just what to write about.

I would write about TwixT.

“TwixT?” I hear you say, “Wasn’t that one of the lesser Francis Ford Coppola films? It’s certainly no board game I’ve ever heard of. It’s surely no classic. It’s probably some entirely plastic thing, released last year.”

It was actually released by a plastics company, the 3M Corporation of Scotch Tape fame. They apparently spent the ‘60s trying to get into board games, hiring game designer Alex Randolph to come up with some ideas. Randolph was, from what I can tell, a reasonably well respected game developer who invented mostly games only board game geeks have heard of: Breakthru, Evade, Genius Rules, etc. TwixT was his biggest hit, having remained in print the longest and having won a “Calliope”, tabletop gaming’s version of the Nebula or Oscar. Even still, it’s out of print today. (Yeah, remember the last time, when I wrote about that amazing pizza only sold in a few states? This might be worse than that.) 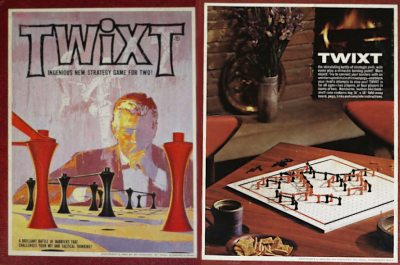 The edition of TwixT that I grew up playing was much older than I was. Some research for this piece leads me to believe that it was produced some time during the ‘70s, after 3M had gotten out of the games business and sold their holdings to Avalon, an imprint owned (as is everything) by Hasbro. It’s box, made to be kept upright on a shelf like a book, remains the most enticing game box I’ve ever seen. It’s front was a painting, a low-angle shot across the board at a stymied opponent wearing a tuxedo, the whole thing done in whites and blacks and reds. “INGENIOUS NEW STRATEGY GAME FOR TWO” read the thirty-some-year-old boast just below the title. The back of the box showed a scene that seemed straight from the study in Clue: a match of TwixT laid out on a small playing table before a roaring fire, mahogany bowls of crackers set in convenient reach next to it. Whatever this game of small fences was, it was clearly a classy, modern game for classy, modern people; this was The New Chess. “Modern” and “new” being, in this case, very relative terms. But, perhaps as a person who had watched more than one of my generation’s fair share of The Dick van Dyke Show, the box spoke to me.

The game itself is simple, very very simple. I’m serious; checkers is more complicated than TwixT. Basically, two players take turns placing pegs into a 24×24 pegboard; one player is Red, the other is Black. Pegs that are what might be called a knight’s move apart (two holes in a direction, then another hole to either side) Can be connected using a crossbar. One peg and however many crossbars are desired are placed in each turn. The goal of the game is to construct a fence of linked pegs from one side of the board to the other. (With a square board, each player works between different sets of opposite sides, marked red and black, to match either player’s pieces.) The first player to link pegs across the board prevents the other player from doing the same, therefore, they win. 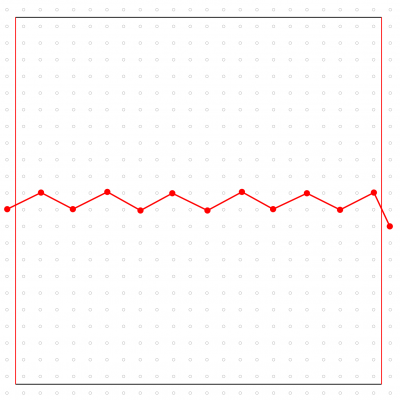 The simplest path to win a TwixT match. Note that it’s not quite a straight line.

It seems almost too easy, doesn’t it? It would be, if it weren’t for that weird, L-shaped knight’s-move spacing between linked pegs. Turns out, if you play the game, you’ll find that there are ways to build out ahead without your opponent being able to block you in one move. The game can turn around quickly if you aren’t careful. Planning out your moves and predicting your opponent’s is essential, and not entirely easy. 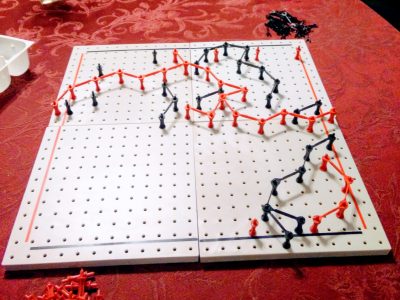 A completed Twixt match. Since this was saved on my phone I think I must have been red.

There’s a lot I like about TwixT. For one thing, the red, white, and black colors of the game work really well, from a color theory perspective. The game’s two player nature is another positive. There’s no playing opponents off each other, or ganging up on the weak player, as there can be in many multiplayer games. There apparently exists a four-player, two-team variation of TwixT, but team games tend to be messy. (Tennis is my favorite mainstream sport for similar reasons. There’s just something clean about a duel.) It isn’t flawless; the winner of the game can be obvious for a few turns in some games, for instance. But it is very clever.

TwixT is a blend of gameplay simplicity and strategic complexity that seems like it should have been invented much earlier, back in ancient South Asia alongside chess, pachisi, and backgammon. But no, it’s less than a hundred years old, and it never became anything as big as those three. And now, it’s not even in production. It endures as a bit of weird, mid-century modern ephemera, a game people used to play from their Eames lounges, as relevant to our lives today as senet, played by the pharaohs from their thrones. As I said, I’ve mostly forgotten it myself, but not quite. 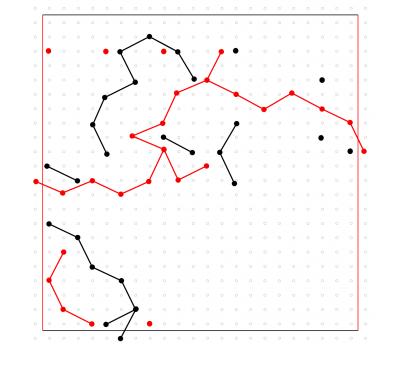 If you ever get a chance to play TwixT, take it, it’ll be a fun time. Unfortunately, game sets can go for upwards of 100 USD online. I’m not sure it’s worth that, especially considering that Randolph developed the game as pen-and-paper before it was a board game. Anyone with gridded paper and two colors of pen can play it.

Board games are a weird little industry. You have your classics like Monopoly, your breakout hits like Settlers of Catan, and many, many more games that just come and go. TwixT is one of those. I’m not sure how much better it deserves, though it probably deserves to remain in print. It’s not my favorite game, but I think it’s still worth talking about.

Derek runs The Edwards Edition, which is a personal review and commentary blog that I don't post to often enough.