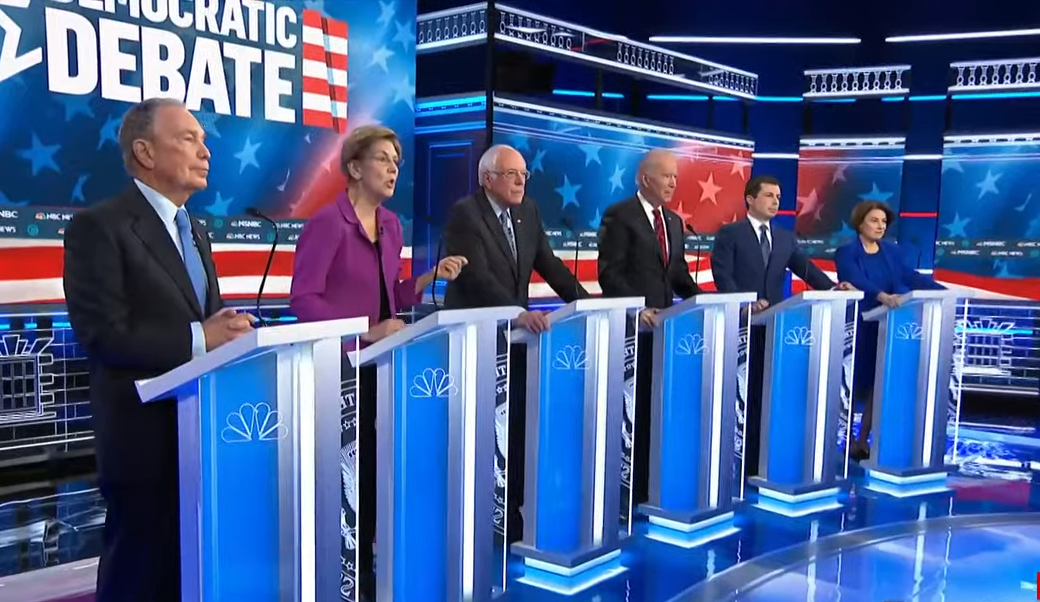 Welp, we finally got a debate with some actual debating instead of the soundbite snoozefests that have become the norm in campaign 2020.

A couple of things before we delve into the candidates. The debates are mini-moments, and it is easy to get caught in the moment so let’s look at the big picture for a moment. Nevada’s caucuses are Saturday, South Carolina next Saturday, and then the following Tuesday is Super Tuesday. Things are going to move quickly now. Most of these debates haven’t resulted in massive poll changes, so we will see, and the New Hampshire debate didn’t seem to really affect that primary much, if at all. So let’s see what happens here. But this debate was far and away the most action packed and exciting to watch. So how did folks do? Let’s pontificate, postulate, and be a bit predictive.

The Bloomlet came in with a lot of narrative and landed with a loud splat at the feet of real live candidates not impressed with the $60B dollar man.

You would have to Google pics of the monk lighting himself on fire in Vietnam to find a good parallel to what happened here tonight. Only unbridled ego would let someone go onto a stage like that so unprepared for what everyone knew was coming. The first 45 minutes was the field stomping on Bloomberg, and his weak answers feeding right into it. His answers on NDA’s for employees were cringeworthy, his mannerisms horrible, and nothing good happened. He managed a “three houses” and “communism” slams on Sanders later on, but the damage was done at that point. His tax return answer was practically the same as Donald Trump’s minus the audit excuse.

Can the nearly $400M in spending wash away this disasterpiece of American political theater? Doubtful. I thought Bloomberg would come in and embarrass himself in his first real contested contest in at least a decade and maybe even more. But my God, that was bad. Michael Bloomberg came expecting a vigorous stop-and-frisk but found himself getting curb stomped instead. Brutal.

The one of the biggest, but least talked about, factors in a presidential election is, who do folks want to see on their TV every day? Few are going to want what they saw from Michael Bloomberg in their living rooms, or anywhere else.

Elizabeth Warren dominated the debate, and most headlines will lead off with “Warren wins the debate” both in soundbites, her disembowelment of Bloomberg on women’s issues in Bloomberg’s company, and her fundraising haul immediately following the event.

But it’s too little too late.

For all the great moments of her attacking the contemptible Bloomberg, there were others where she was constantly inserting herself awkwardly and glaringly, seemed to force stories in where they didn’t fit, force moderators to shut her down, and attacked other candidates regardless of whether their place in the race was worth the limited bandwidth left to her. More to the point, she did it all in the same, overly earnest tone that never changes. It’s all one note throughout. She raised $400K the first hour after the debate, but to compete on Super Tuesday she would need 10s of millions. She may “win” this debate but her campaign is still DOA and just waiting for the inevitable.

But she probably did her party and the country a favor by putting a knife in the Bloomberg campaign. If she accomplishes nothing else going forward, we should be able to come together and thank her for that.

Not his best effort. He got bogged down with Amy Klobuchar multiple times, and each time neither of them looked good in them unless you are a supporter. He also has a weird habit of being so smooth with the perfect answer every time, but when someone hits him he just sort of blinks it off. It’s hard not to feel the second in New Hampshire was the crest of the Pete wave. If he gets something going, it won’t be off this so-so performance.

See Pete, but with a few differences. The moderator going after her on her flub over the president of Mexico was fair, but dwelling on it sure came off as bad form from the moderator. Amy is barely containing her disdain for Pete Buttigieg, and it is really starting to show, and that isn’t helping her catch up with the Sanders of the race. Like Pete, a good showing in New Hampshire was her high water mark. She doesn’t have the money or infrastructure to compete now.

Nobody hurt him, and talking less made him play better. If Bloomberg’s poll numbers take the hit they should after his pitiful showing, he may well get a bump of folks “running home” to Biden out of lack of options. Is that enough to turn around his lackluster campaign? If it does happen and Joe mounts a comeback, it feels like it will be someone else messing up more than Biden rising above. Still, he isn’t as dead as some other campaigns, and he steadied the ship a bit tonight, but unless he is very strong in Nevada and South Carolina this race will pass him by.

Sanders racks up another tactical victory — he didn’t get hurt much and was vintage Bernie — but that also raises the same old questions. Bernie debates are all the same. He has one gear and three answers and no matter what happens that’s what you are getting. It is steady, but for a candidate that most experts insist has a ceiling he is doing nothing to expand his support. He may not need to for the primary if things still stay divided, but the part-time Democrat probably doesn’t want to leave it in the party hands whether he is the nominee or not. He needs to win it outright, and 30% isn’t going to cut it. He’s the frontrunner now, not the protest candidate in 2016. He has the clearest path, even with his issues and limitations. See what he does with it.

Onward to the Nevada caucuses on Saturday, where minorities will finally get some say in the proceedings and Bernie Sanders’ spot as front runner is the issue at hand. And of course the next debate on Tuesday, February 25th in South Carolina. What fun.