Modern Game Design: The Route to Fun and The Fun of Root 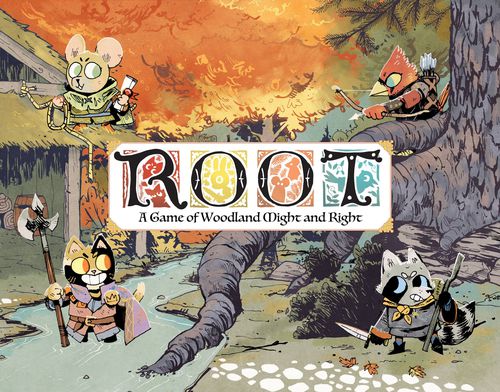 For the Symposium I want to discuss a boardgame that has swiftly become my favourite, and the favourite of my D&D group (we play boardgames if we don’t have enough people to run a session). It’s also a great showcase of how game design has evolved in recent years – Root, a game by Cole Wehrle of Leder Games.

If you aren’t familiar with hobbyist board games, you may not realize that board games have changed a lot since your childhood. Games like Monopoly or Risk are generally considered much inferior to more modern designs by hobbyist board gamers, and for good reason. Root, which came out in 2018, is an excellent example of how much fun an innovative game design can be.

My one-sentence description of Root is “adorable woodland creatures, engaged in vicious sectarian conflict”. Each player plays a nation or faction of woodland animals, each bearing a resemblance to a real political archetype (and yes, the art is adorable), and battle for supremacy over a network of woodland clearings. The widely-known game that Root most resembles is Risk – each player is (mostly) raising armies and fighting over territory in order to score points. But unlike Risk, the way this is done varies radically for each player:

There are two other factions that have subsequently been released in an expansion (mercantile otters and a cult of lizards), and they have their own mechanics for how to gain power.

The thing that really makes Root shine is that despite this complexity and variation it is well-balanced and plays very quickly. Games like Risk or Monopoly usually take over 2 hours, while 2 hours is a long game of Root. You do need to pay attention to the mechanics of the other factions, but the variations in how the factions work means that it can be fun for people with very different play styles.

All in all, Root is one of the freshest and most interesting game designs I have come across, and it’s a lot of fun to play. If you’re into board games at all, I really recommend you give it a go if you get the chance.