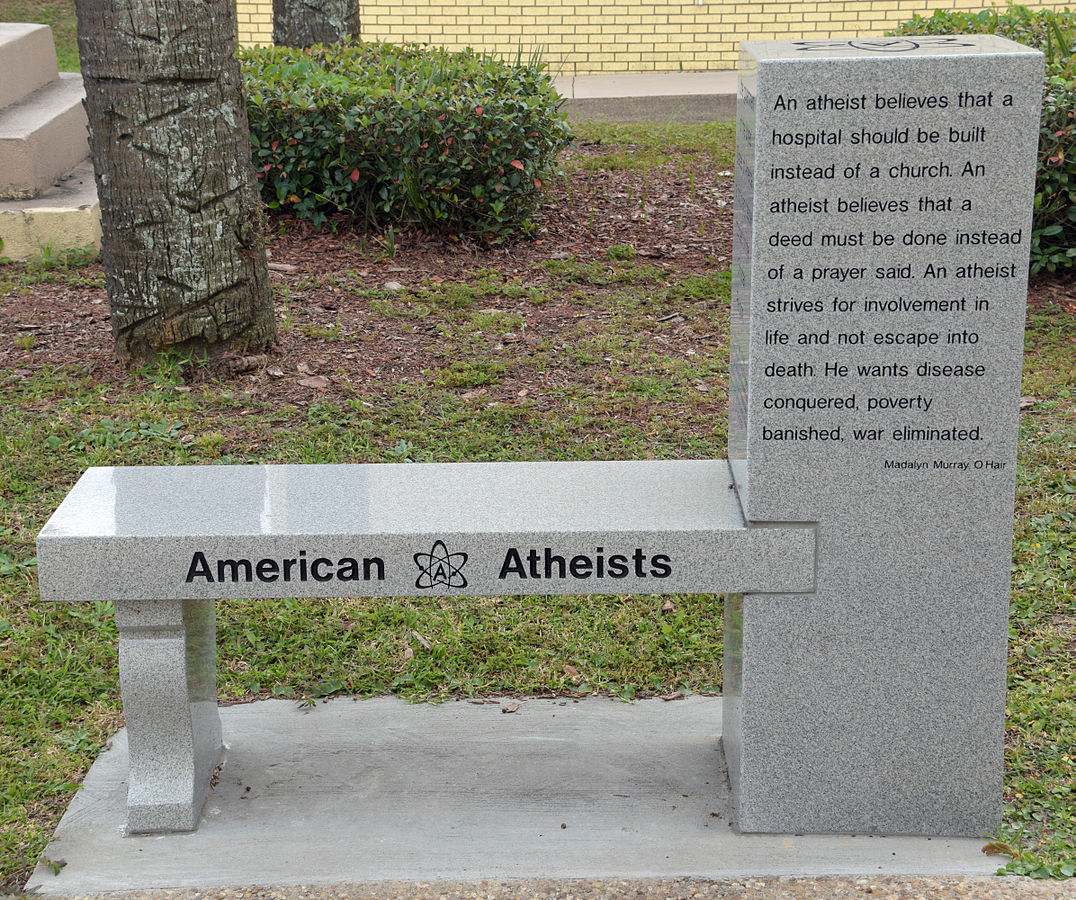 L1: A Pennsylvania law passed in December 1959 required, at the outset of a school day, the recitation of ten verses from the Holy Bible, to be read over the school intercom or in individual classrooms. Students could be excused from participation at parental request (though it is unclear how one avoids participation in hearing the readings over an intercom). A challenge was brought against the law by the Schempp family on First Amendment grounds, arguing that the provision allowing their children not to participate served only to single their kids out and perhaps impair their relationships and standing among teachers and peers.  The Schempp family belonged to a Unitarian congregation.

Meanwhile, in Baltimore City, Maryland, the school board enacted a similar rule, providing for daily “opening exercises” of reading a chapter of the Holy Bible. The mother of student William Murray objected and appealed to the board to rescind the rule, to no avail. The Murrays then filed suit, but succeeded only in the addition of a provision to excuse students from participation, as the Pennsylvania statute allowed. The Murrays were atheists.

In 1963, the cases were combined and and presented before the Supreme Court of the United States in our case of the week, School District of Abington Township, Pennsylvania v. Schempp.  The case was not the first “religion in schools” case; less than a year prior, the Court declared government-sponsored prayer in schools unconstitutional in Engle v. Vitale. Engle involved the creation by the legislature of the state of New York of a prayer to be recited in public schools, which invoked “Almighty God.” Abington differed from Engle in that it was not reciting a prayer that was in controversy, but reading Bible scripture.

The outcome was the same. The 8-1 opinion in Abington clarified that the Court’s holding in Engle extended to mandatory readings of the Bible, not just school sanctioned prayer. In a 73 page concurrence, Justice Brennan joined fully in the majority opinion, undertaking a deep and lengthy dive into the religious beliefs of the founding fathers and the history and context of the Establishment Clause. Brennan acknowledged the role of religious faith in the shaping of society, but, in keeping with Brennan’s philosophy of a living constitution, advocated a modern interpretation of the First Amendment. Wrote Brennan:

A too literal quest for the advice of the Founding Fathers upon the issues of these cases seems to me futile and misdirected for several reasons: first, on our precise problem, the historical record is, at best, ambiguous, and statements can readily be found to support either side of the proposition… While it is clear to me that the Framers meant the Establishment Clause to prohibit more than the creation of an established federal church such as existed in England, I have no doubt that, in their preoccupation with the imminent question of established churches, they gave no distinct consideration to the particular question whether the clause also forbade devotional exercises in public institutions.

Second, the structure of American education has greatly changed since the First Amendment was adopted. In the context of our modern emphasis upon public education available to all citizens, any views of the eighteenth century as to whether the exercises at bar are an “establishment” offer little aid to decision…

Third, our religious composition makes us a vastly more diverse people than were our forefathers. They knew differences chiefly among Protestant sects. Today, the Nation is far more heterogeneous religiously, including as it does substantial minorities not only of Catholics and Jews but as well of those who worship according to no version of the Bible and those who worship no God at all.

The lone dissenter in Abington, as in Engle, was Justice Stewart, who was of the opinion that the sole purpose of the Establishment Clause was to prohibit the enactment of an official state church. He would have sent Abington back on remand for development of facts to determine whether the policies in question included an element of coercion.

Oftentimes, the named parties in SCOTUS cases fade into obscurity except as shorthand for the subject matter of their holdings. But a party to this case became controversial and noteworthy beyond this one case. That was the mother of William Murray, Madalyn Murray O’Hair. O’Hair is probably the most well-known atheist in modern American history, a woman who was dubbed by Life magazine “the most hated woman in America.” Following the Abington case, she founded the American Atheists. She went on to file several religious freedom lawsuits, protest the reading of scripture during space shuttle launches, the inclusion of God We Trust on American currency, and nativity displays. She wrote several books, was the very first guest to appear on the Phil Donahue show, wrote articles for Hustler and Playboy and even appeared on the Tonight Show with Johnny Carson. She was the mother of two sons born out of wedlock, a WWII army vet, and a law school graduate. She also became a subject of my favorite hobby: true crime.

In August 1995 Madalyn, her son John, and her granddaughter Robin disappeared from their Texas home. Many suspected the O’hair family had absconded with the money from the American Atheists, but Madalyn was in touch via cell phone with members of the organization. In September of that year the family wired $600K from a New Zealand bank account to the US, where they used it to purchase gold coins, only $500K of which were picked up.

Eventually, the cell phone contact ceased, and nobody heard anything more from Madalyn, John, or Robin.  In 1996, a San Antonio reporter named John MacCormack began investigating the disappearance. Through a series of tips, MacCormack was eventually led to a name in 1998: David Waters. Waters was one of several convicted felons Madalyn had hired to work for the American Atheists -until he was convicted of stealing $53,000 from the organization in 1993. The same tipster who gave the name of MacCormack also mentioned the name of another missing associate of the O’Hair family, Danny Frye, who was also an associate of David Waters.

The reporter discovered Frye’s whereabouts shortly thereafter; it turned out that he – or parts of him – were found floating in a river near Dallas in 1995. The FBI got involved after the connections were made, and Waters and another man, Gary Karr, were arrested. Although Waters maintained his innocence, Karr turned state’s evidence and both men were convicted. Following the conviction, in 2001, Waters led authorities to a burial site on a south Texas ranch. There they found the burned and buried remains of the three members of the O’Hair family, and the rest of Danny Frye. Madalyn was identified by her artificial hip.

Waters, Karr, and Frye had kidnapped the O’Hairs in August 1993 and kept them in a motel room for a month before strangling them. Then, Karr and Waters turned on Frye and killed him, too. Waters was sentenced to 23 years in prison, but died of cancer in 2003. Karr is serving two life sentences.

The remaining son of Madalyn Murray O’Hair, William O’Hair, was disowned by his mother when he became a devout Christian. He claims his mother was an “evil person who led many to Hell”, and that she used him to further the Atheism cause. He continues to be a practicing Baptist minister.

L2: Two decades after Bush v. Gore, will SCOTUS once again decide the winner of a presidential election?

L3: Take heart, Virginians living in sin: it may soon be legal to have sex with your mate. (And here I’d always thought Virginia was for lovers!)

L4: Speaking of Least Virginia: Oats and almonds do not lactate, and therefore cannot produce milk. Everyone knows this, but Virginia felt the need to codify it.

L5: The new legal drama “For Life” debuts this week on ABC, about an inmate who becomes a lawyer. Based on a true story, the show was created by Hank Steinberg and Curtis Jackson, better known as 50 Cent.

L6: Forensic evidence has become SOP in criminal cases these days, but a string of bad labs and bad techs have thrown the system into chaos in several jurisdictions.

**On a personal note: I apologize for the absence of Writs the last few weeks as I’ve dealt with my sister’s illness and passing. Special thanks to Burt Likko and Andrew Donaldson for filling in.