A million years ago, back in the 90’s, there was this game series that came out called “Smartgames“. It was a collection of puzzle games and, golly, was it a hoot. It had one section devoted to showing you a deconstructed cube like this one: 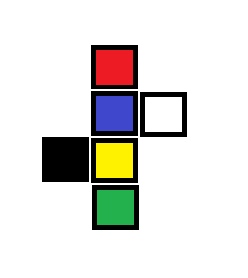 And then it would show you pictures like this one (I freehanded this, please bear with me) and asked you “using this pattern, is this cube possible?”: 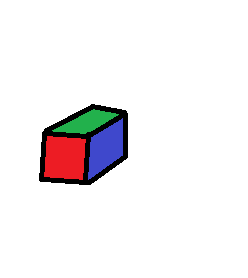 For each cube, it had 10 questions and you had to get all 10 right to go on to the next question. The first cube was about as easy as the example I provided above. The 2nd cube had pips on it. By the time you got to the 6th cube, the questions started getting hard and by the time you got to the last questions, you really had to be able to manipulate shapes in your head because they would give you deconstructed cubes in the shape like these:

And it’d have different subtle patterns on the cube faces and if you made one mistake, you didn’t know which of the 10 questions you got wrong.

And there were, like, 20 different categories of games! There was one where you had to time traffic lights in such a way to avoid gridlock. There was one called “Cash Crop” where you were dropped in the middle of a field and different squares in the field had different cash values… assuming you only had 5 moves, what 5 moves would give you the most cash? As these puzzles progressed, they made the fields larger or gave the fields weird shapes and fiddled with the number of moves you had to give you the target amount before showing you the next puzzle. They had the first incarnation of Rush Hour that I had seen (and I was hooked). They had a cryptography section. They had a game where they gave you the full alphabet and asked you to use as many letters as possible to make unique words. Can you do it and have only 6 letters left? How about 5 letters left? How about 4? (If memory serves, I got down to 3 or 4. Googling tells me it’s possible for a non-scrabble champion to get down to 2. There are some seriously obscure words that will let you use all of the letters of the alphabet, though…) Now what if they gave you TWO alphabets? What about 3? What about SIX? (I was far too fond of words like “strengths” because I thought “LOOK AT THAT VOWEL ECONOMY!” instead of realizing how dear ‘t’s are.)

There was a version of the game of Life. Not the board game: Conway’s game of life. They told you the rules and gave you an end state and asked you to give a starting set of conditions that would result in the particular end state. And then they changed the rules and added colors. And then they changed the rules again and only told you “yeah, we’re not going to tell you what the rules are… figure them out yourself.” There was a set of series. They’d give you the first however many parts of a series and then ask you to give the last 3. The early parts of the questions asked you about stuff like the squares or the Fibonacci sequence. Then they started asking stuff like “WH IN TH CO OF HU EV IT __ __ __” and having you figure out the next three.

Well, each puzzle gave you points. My score was in the low six millions the first time I sat down to play it. A year or two later, I sat down to play it again, from scratch. And this game that I loved so much when I first got it was SO MUCH HARDER the second time I sat down to play it… but I was able to solve puzzles that I wasn’t able to solve a couple of years before. I had gained skills, somehow, that I didn’t have back when the game was easy. By the time I put the game down the second time, I had broken seven million points. I left a million points on the table! What the heck! How was I unable to do that just a few years before?

Anyway, I recently sat down with Batman: Arkham Knight to re-beat it.

And I found myself getting achievements that I didn’t get last time. How did I not get three stars on all of the various trials around town last time? Who was I that I couldn’t beat this race? That I couldn’t destroy these tanks? Lemme tell ya, my reflexes haven’t improved since 2015. But, apparently, something clicked and this little section that frustrated me last time to the point where I put it down opened itself to me and stuff that was difficult was now possible.

I imagine that there’s a life lesson in there.