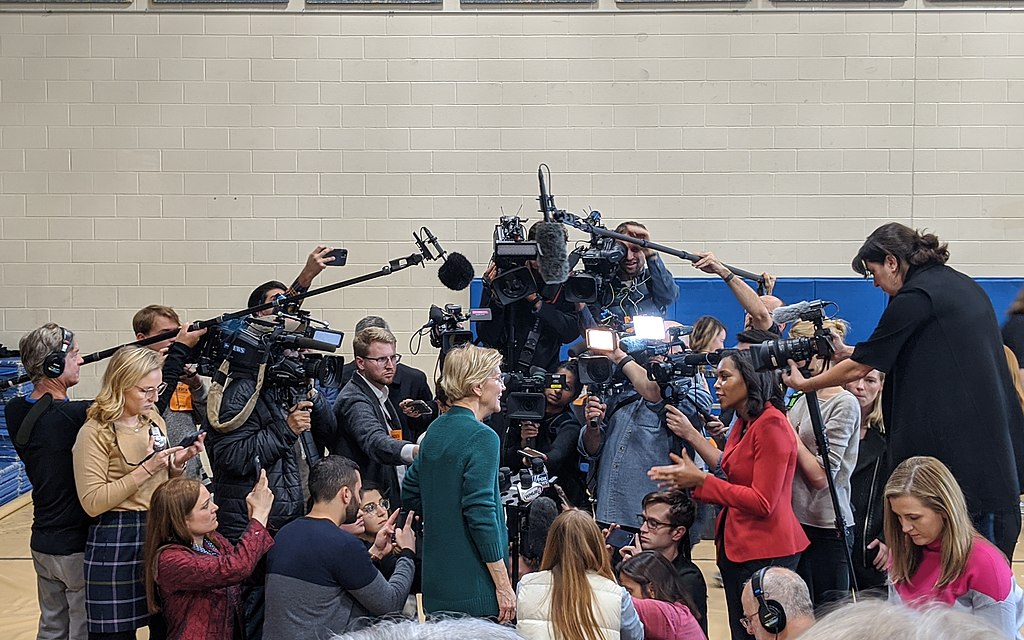 The Iowa caucuses are, mercifully, only four days away now. It’s closing arguments time for candidates who have spent an outsized portion of the last year gladhanding the fine folks of the Hawkeye state. With this year’s festivities sandwiched between the Super Bowl, the State of the Union — and with the background noise of the Senate impeachment trial half the field of contenders are focused on for their day jobs — this year’s event should prove unique. Iowa’s place of prominence in national politics will peak and then focus will shift to New Hampshire and beyond as the primary season is all down hill from here.

For someone like Senator Elizabeth Warren — who is faltering in the polls of late to the point her advocates haven’t bothered with a “Warren is Surging!!!” 5.0 update — you might be interested in what initiative, issue, or cause would be highlighted by the candidate and her team in these final desperate days before the votes start counting. The entire strategy of campaigns are often aimed at this very moment in time. So yesterday the Warren Machine of Plans for Nearly Everything labored to produce and announce a plan of “Fighting Digital Misinformation.”

To truly stem the spread of damaging false information, tech companies and the federal government need to take a more serious, comprehensive approach. But I’m committed to doing everything I can do to combat disinformation, and that means tackling it on the campaign trail.

It’s not enough to make vague statements condemning fraudulent attacks on opponents or efforts to suppress the vote — while also reaping the benefits of those attacks on democracy. Campaigns need to make clear that disinformation has no place in our campaigns, and that we will disavow supporters who embrace it and act quickly to stop its spread. That’s why I’m pledging to fight disinformation aimed at my campaign, my opponents, and voters:

My campaign will not knowingly promote content from fraudulent online accounts.

My campaign will not knowingly allow campaign staff or surrogates to spread false or manipulated information on social media.

I’m sending a clear message to anyone associated with the Warren campaign: I will not tolerate the use of false information or false accounts to attack my opponents, promote my campaign, or undermine our elections. And I urge my fellow candidates to do the same.

As media strategy, it hits all the Search Engine Optimization points, uses the right buzzwords, and allows the online community, media outlets, politicians who really want their grubby hands all over the freedom that is the internet, and punditry Greek chorus to do what they all do best and talk about themselves.

To voters bundling up to go out and spend a few hours on Monday night debating presidential candidates, it is highly questionable strategery.

Folks on the right, not to mention supporters of her competitors, will have a field day with some of that plan, considering controversies that have surrounding Senator Warren in the past with her ancestory/DNA test moments and more recently the she said/he said with Bernie Sanders. But there is a much simpler reason why bringing this up now, and burning the dwindling opportunities for attention to your candidacy on this issue, is foolish.

Primary voters don’t care about it.

The latest Morningside polling in Iowa found the top issues for Iowans in these last few days before caucusing to be the government and political discord, economy, agricultural issues and policy, and healthcare. Nothing surprising there. Nationwide, Gallup’s polling of most important issues to voting age adults both by rank and partisan divide went sixteen deep with no sign of “digital disinformation” to be found. While one could argue that “political discord” is driven by misinformation, the idea that you are going to lecture folks about not hearing and believing what they want to hear and believe in an effective manner that endears you to them as a candidate is very wishful thinking. More probably, it will devolve into variations on the theme of “you must be protected and I’m here to do that for you,” which has the opposite effect.

The point of a primary is to win. Period. To win, you have to get the participants in that primary to buy in to what you are selling. Elizabeth Warren is pitching an issue that, while it is important in many respects, is not even on the radar for the cause-goers that look to be poised to place the Senator from Massachusetts in a third, fourth, or worse place finish in a state she once hoped to win and build momentum in. Burning bandwidth on issues folks don’t care about is not a winning strategy. Couple it with the disastrous rollout of her Medicare for All plan and just ok debate performances, the favorite candidate of many pundits, wonks, and media outlets must be deemed to have under-performed given where she started this campaign.

The postmortem on the Elizabeth Warren 2020 campaign later this spring will be full of reasons, excuses, if only-isms, and coulda, woulda, shouldas. Those reviews should also be long on the running thread that has plagued this campaign since its inception, a flaw that is the fault of the candidate running and filters down through the organization promoting her: lots of plans for everything except winning over Democratic Primary Voters that do the actual voting.