The American Lawn is a Shared Nuisance 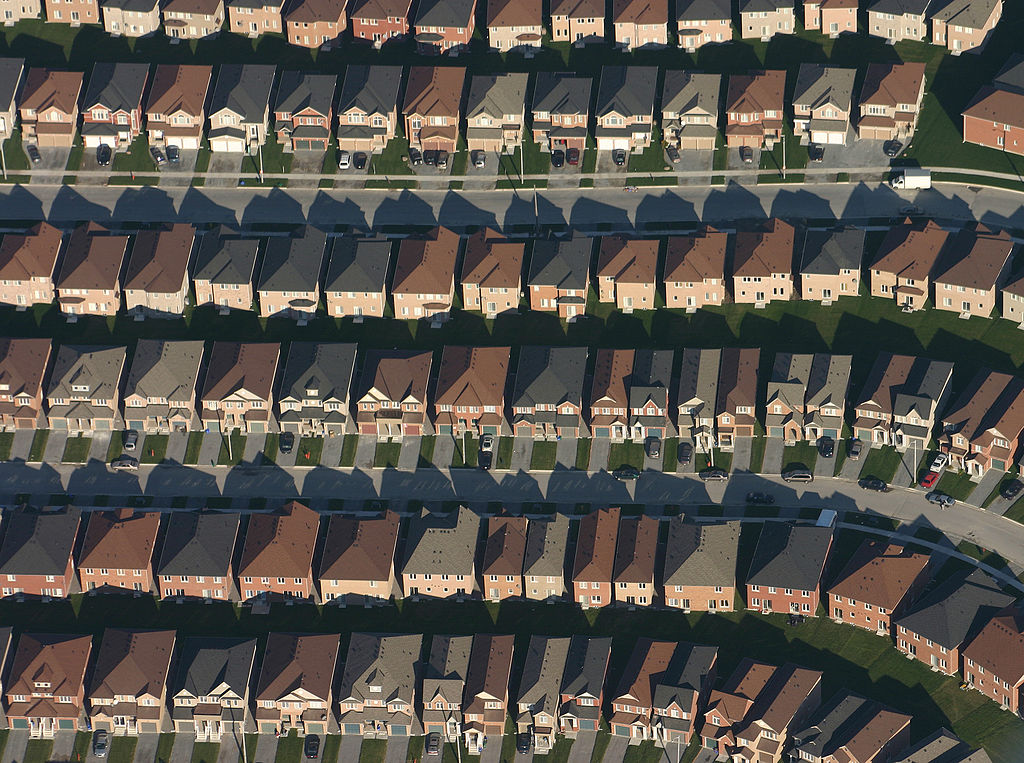 Picture by IDuke via Wikimedia Commons

it is sometimes not possible to uncover the logic (or illogic) of the world around us except by understanding how it got that way.

In other words, the world we see might not be the result of neat long-term equilibrium points, but just the result of a succession of events one inexorably leading toward the next.

Here, I would like to argue that many features of the American housing market are the result of path dependence rather than underlying preferences held universally by home-buyers.

Despite people in the United States being very different from one another, they largely live in houses that are identical to one another’s.

A big part of the reason for this is that people regard houses not only as a place to live, but as an investment that they must sell at a later date. The need to sell factors heavily into any buying decision.

For example, even people who have no children ask about the quality of school districts because they want to be able to sell their house to people who do have children. They make sure that their house checks all the boxes even if they won’t personally use half the boxes.

There is some underlying individual-level rationality behind this. If a prospective suburbanite who nevertheless doesn’t have a car wants to buy a house, should she buy one with a garage?

Say she searches through her neighborhood and finds a single house that has no garage. She is fine with this. It’s one less thing to maintain, lock, and insure, after all.

Nevertheless, when it comes to time to sell the house, who will she sell to? Most buyers will look at her home and wonder where they are going to park their cars. Her house will be the weird one with no garage. Even if the next prospective buyer also doesn’t need a garage, he will demand a sizable discount because, after all, the house doesn’t even have a garage, and he does’t want to get stuck with the weird house that doesn’t even have a garage when it is his turn to sell.

Another house feature I would like to add to this category is the fireplace.

Nevertheless, we do occasionally get moments of grace.

A must have house “feature” for generations was the separate formal living room. This was a room of one’s house where the fancy sofa and couch were and the fancy coffee table. Once every five years when your boss comes over to dinner, you would entertain him in this area of your home. The room is otherwise ignored.

Decade after decade, the living room survived, adding tens of thousands of dollars of valueless expense to everyone’s houses. Eventually, it’s hold was broken by the conception “Great Room”, a much larger room that supposedly allowed you to combine your family and living rooms. By calling it the Great Room, it let home-buyers feel like they weren’t just cheaping out on not having a living room, but instead upgrading to something more useful.

Nevertheless, obscenities like fireplaces in Atlanta persist. Houses often have formal dining rooms that go unused 364 days of the year. You are obligated to put a dining room table there even though you always eat in the room that is more convenient to the kitchen.

Do not misinterpret me. I do see you, the single reader who enjoys and makes great use of their dining room and could not manage a life worth living without it. I am not arguing that you do not exist. I am only arguing that you are not 100% of the population. Despite not being 100% of the population, 100% of what are considered proper houses in the United States are built to accommodate you. That is weird.

My point is not that dining rooms have no use. If they had never of any use to anyone, they probably would not have been developed in the first place. My claim is that a significant number of new home buyers do not use dining rooms. They know they will not use it. They know they are paying for it on purchase and will pay to heat, cool, insure, and clean it throughout the time that they own their home. Nevertheless, they do it because what are they going to do? Buy the freak house that doesn’t even have a dining room?

A properly efficient equilibrium solution would predict that if 30% of the population is willing to pay the extra expense of having a formal dining room, then approximately 30% of houses would come with them. Instead, 100% of houses come with them. This is what path dependence has wrought.

If you read the title, you know all of this ranting has been but prelude to the uber-rant: lawns.

Houses without lawns would look really weird in many neighborhoods. It might not even be legal. People’s conception of a house is that there should be a house in a plot of land with a driveway leading to the house across a front lawn that contains two trees. In the back, there should be a back lawn. No trees are necessarily needed there.

In real life, do people use lawns?

I would argue again that as with dining rooms, people as a whole do not use them in anything close to proportionate to the expense and hassle they expend in maintaining them.

However, there are also people like my parents. My parents have a lawn. They bought it. They pay for someone to come and mow and edge it. They pay for someone to do all the landscaping necessary. They occasionally step out into it, but never have I seen them use it. Their neighborhood does have public space, and they do use that occasionally, but never their own private lawn that they pay a considerable amount to maintain each month.

As near as I can tell there are millions like my parents for whom a lawn is a perpetual source of expense and very rarely of joy.

This will persist indefinitely, however. Housing options that do not include lawns exist, but they are always considered second-tier. A townhome or condo is considered a decided downgrade in the hierarchy of American housing options status-wise even if it would lead to a particular resident leading an objectively better life.

It would be bad enough if only millions of people individually suffered paying for lawns they don’t want. Unfortunately, there’s more. Lawns use a lot of water, sometimes in areas that don’t have enough. Lawns are often maintained with inefficient, dirty machines using two-stroke motors. Lawns take up a lot of land, spreading everyone out and making the case for shared amenities like parks and retail establishments harder to justify.

I have seen first-hand what not having lawns can do. My wife’s hometown is decidedly rural and has a significant agricultural industry. Even so one (that I know of) there has a lawn. Everyone is in flats or apartments or stacked townhouses. The only standalone housing I saw, in fact, was for extremely poor people. And these were stacked densely next to one another with no vegetation between, not individually on a generous plot of land that could be considered a lawn.

Accordingly, in China I was showered with a number of benefits that I would not expect in even the densest of American cities. There were small playgrounds with adult outdoor exercise equipment within the block. There were other kids my kids could play with. There were restaurants and a convenience store inside the apartment complex. There were motorcycle-based restaurant delivery services that could deliver food from any restaurant as soon as it was prepared. A nice mall was a pleasant bike ride across a very large park where my kids could play.

None of this derives from China’s wealth. China’s GDP per capita is the same as Mexico’s. Instead, the benefits came from density. There were enough people living within a concentrated area of space to merit building a restaurant, a park, a shopping center, and all the other things I appreciated. Ironically, a wealthier China that chose to adopt American preferences might lose these things. If people chose to spend their wealth to live further apart from each other, the benefits of public amenities would lower accordingly and their provision would collapse to something resembling the United States.

But at least they’d have lawns. Whether they wanted them or not, they would all have lawns.