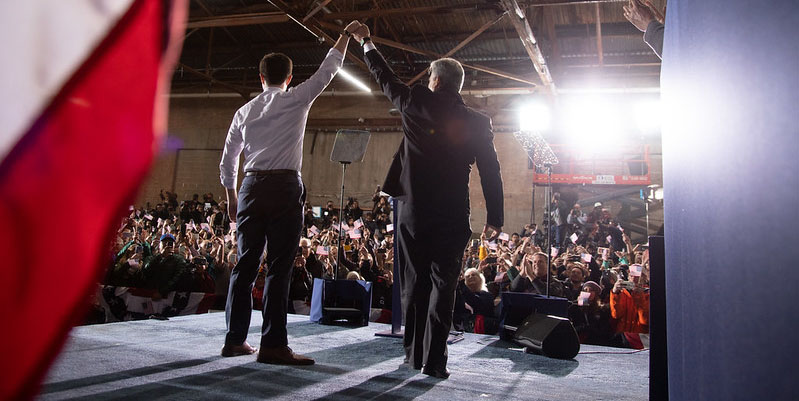 It’s a done deal. He has broken ahead in the state polls he significantly outperformed in 2016 with voter enthusiasm and new voter support. Joe Biden’s lethargic and unenthusiastic campaign has little chance. His primary rival for the state, Elizabeth Warren, has faltered. Pete Buttigieg met his ceiling and receded. It’s Bernie’s state. Bernie is also extremely well positioned in New Hampshire. In 2016 he won New Hampshire by over twenty points. As a senator from a neighboring state, he is well-known and liked there.

The last time a Democrat has won the nomination without winning either Iowa or New Hampshire was 1992 and that one involved both a favorite son in Iowa and a neighboring-state senator in New Hampshire.

Biden has been leading in most of the scant polls in Nevada, which comes next. However, once he wins Iowa and New Hampshire then Sanders has all of the momentum and that will almost certainly carry him over what is currently a small lead. Further, Nevada is another caucus state and Sanders overperforms in caucuses.

Biden has said that Super Tuesday is his firewall, but he could run out of money before that. As of the beginning of January, he had $9 million on hand (compared to Bernie’s $33 million). Sanders, who reported $33 million on hand, is liable to have his donations explode. How does he make inroads to Latinos, African-Americans and other voters? Advertising. Since Sanders thrives on small donors, he is unlikely to hit donation caps and so people who have given will be able to give more. It’s an advantage to being genuinely popular.

There are a number of Biden-friendly states on Super Tuesday, but they aren’t the only ones. California and Texas alone account for nearly half of the delegates, and polls show Sanders winning California. Texas is a little more up in the air but Sanders will have considerable resources to devote to it and like California it is Latino-heavy. Biden might look good in North Carolina, Virginia, and Alabama, but Sanders looks good in Massachusetts, Maine, Utah, and of course Vermont. Even if he has the resources to compete and his campaign has not imploded, that is an extremely weak firewall. It won’t hold.

After that, Sanders has virtually no competition. Biden will have successfully prevented a more formidable competitor – such as Warren – to compete without being sufficiently competitive himself.

Bernie Sanders is going to win.

While people keep looking at Bernie Sanders as the Trump of this race – the guy who wins that nobody saw coming – there is a stronger case that Joe Biden fills that role. As with Trump, coverage of the entire race has been about who is placing 2-4 for when the frontrunner “inevitably collapses.” And as with Trump, every wave that has crashed to shore has been The One. He was going to be exposed when the debates started. Harris took him down in the first debate. Warren ascendant. The bloody eye. Warren ascendant. Ukraine was going to take him down. Warren ascendant. Now, a year later, everything is going to change again after Iowa.

The argument goes that nobody wins the nomination without winning either Iowa or New Hampshire. This argument parallels with what you see in sporting events where they say at half-time “When ahead at half-time, Cal State wins 90% of the time.” It sounds like an impressive statistic that shows Cal State as having second-half grit. That statistic is thrown off, however, because in most of those games Cal State is ahead at both half-time and the end because they are the better team. The half time score is indicative of the fact that they are going to win, rather than the cause of it.

Likewise, presidential candidates that win the nomination usually win one of those two states because they are generally the stronger candidate. If by chance and circumstance they have a disadvantage in those two states but are nonetheless strong candidates, it’s not hard to see them winning anyway. Bill Clinton did it in 1992. Hillary Clinton came within a hair of losing Iowa in 2016 and then losing New Hampshire, and if that had happened the outcome would likely have been the exact same as it was. Sanders is well-suite to Iowa and, like Tsongas in 1992, has a home field advantage in New Hampshire. Then Nevada is a caucus state. He stands a good chance of running the hat trick mostly due to circumstances. He will benefit from the illusion of momentum, but it will prove to be illusory.

People point to 2008 when African-Americans backed Hillary Clinton until she lost Iowa and didn’t anymore and suggest the same will happen if Biden fares poorly in 2020. What happened in 2008, though, wasn’t just a matter of Clinton losing but also a matter of Obama winning. Obama had a clear connection with African-Americans that made moving from one to the other easier. Nobody has that connection to pick off Biden supporters. We should not regard African-Americans as mindless supporters of whoever is winning and consider that they genuinely like Biden.

Further, this all assumes that Sanders wins clear and unambiguous victories in the first three states, which is less clear than you might think from the coverage. Iowa will be releasing two different vote tallies as well as a delegate account, and while the frontrunner there Sanders might not win all three and therefore two people can claim victory. If it’s Warren, that could create problems in New Hampshire if momentum between the two states exist (which seems to be an assumption people are relying on, shrugging off the 2016 Republican primary results). Nevada caucuses are always chaotic and unpredictable, and also Biden has been winning the polls there. The most Sanders-friendly polls assume a lot of new involvement by young people, which is never a safe assumption.

The 15% delegate threshold should whittle down the number of candidates to two or three pretty quickly, which may further assist Biden. Unless Buttigieg, Bloomberg, or Klobuchar are the third, you either have a one-on-one race or Warren further complicating things for Sanders. Once it’s clearly a race between Biden and Sanders, donors who have been sitting on the sidelines or donating to Buttigieg likely start getting involved. Biden leads Sanders in head-to-head numbers even in Biden-unfriendly polls, so the idea that an anti-Biden vote will coalesce is sketchy even if Warren is out.

The case for Biden is that he has been winning this entire time. He’s got this.

Bernie Sanders is doing great in the early state polls, but he has not yet faced the headwinds of a front-runner. Coverage changes when it looks like you’re going to win and until very recently it has never looked like Bernie Sanders is going to win. Much of the opposition to him is unmoving. There is this idea that the more the party pushes back the more people will love him, but one of the fundamental differences between the Democratic and Republican Parties is that the former lacks the latter’s contempt for party leaders. Nancy Pelosi’s approval ratings are significantly higher than Paul Ryan’s were and leagues above John Boehner’s were because Pelosi, unlike Republicans, has support from within her party. During the 2016 election the most recent Republican president was a deeply unpopular George W Bush, while for Democrats now it’s a very popular Barack Obama.

This all looks good for Biden, but Biden has his own problems. Much of his support is built on his strength as a candidate, and it becomes progressively harder to make that case if he loses primary after primary. That, combined with lackluster fundraising, makes it questionable that he won’t crater entirely on or after Super Tuesday. When he does, there is only one real choice left: Elizabeth Warren.

As of the beginning of January, Warren had over $25 million on hand compared to Biden’s $9. That’s not as much as Sanders, but it’s enough to compete with Sanders. She has performed well enough in Iowa that she should be able to place ahead of Biden in at least one of the tallies and therefore able to declare victory of a sort. That carries over into New Hampshire, which she neighbors and where she has polled decently. Then if she can hang on through Nevada and South Carolina things start looking bad for Biden, which leaves a void that only she can fill.

The party has been slow to embrace Warren, but mostly out of indifference rather than (as with Ted Cruz on the Republican side) outright hostility. That changes if it’s Warren against Sanders and it changes dramatically. She is an Obama nominee that Obama has talked up to donors. The party may not be racing to embrace her, but they are ready to if the time comes. Her appeal with both sides was going to help her when it looked like it might be a two-person race with Biden, and will help her if it comes down to the same with Sanders.

[This space has been intentionally left blank]