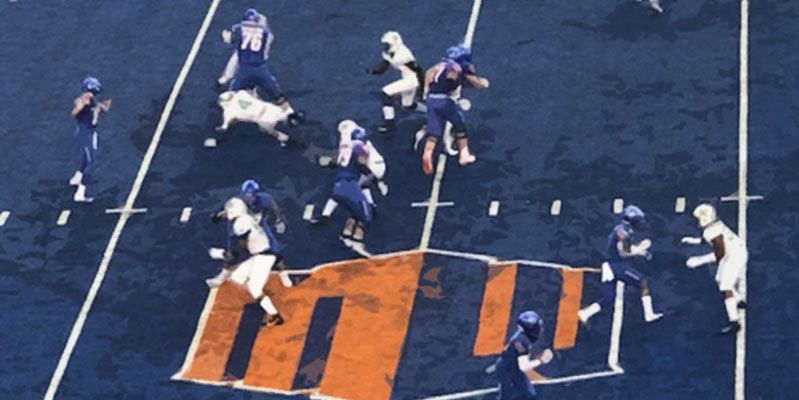 Boise State University may have become the first university to file a suit against its own athletic conference. Or, at least, against a conference that it wasn’t immediately intending to leave. The most recent chapter of this story involves a television deal signed earlier this month. A surprisingly good television deal that exceeded most expectations.

The Mountain West Conference is what is considered “G5” or “mid-major”, in the highest football subdivision but outside the power conferences. They, along with the American Athletic Conference, are the two strongest of the five. So when it comes to television contracts, expectations are somewhat limited. Even so, they got a contract that pays out to most of the teams roughly $3.9 million a year, up from the $1.1 million in their previous contract.

I say “most of the team” because there are two exceptions, of which Boise State is one1. Boise State worked out its own deal when it was being pursued by the Big East (now the American Athletic Conference) and the Mountain West wanted to lure it back2. They had and used the leverage to demand very favorable terms: the ability to negotiate their own television deal for their home games. They didn’t get to keep all of the money from the deal, but the conference television payout system would favor them. This may sound like a small thing, but it is virtually unheard of. The Big 12 fell apart for much less.

This caused some problems from the get-go. Specifically, the payout structure was so weighted (based on television appearances) that some schools were getting a fraction of what other schools were based on scheduling luck, and television revenue from one season to the next was very unpredictable. They decided “to hell with it we will just give Boise State extra money” and they calculated that number at $1.8 million based on the average excess revenue they were already generating. Ten conference members were earning $1.1 million per year while Boise State was earning $2.9 million.

In the intervening years, a couple of things happened. First, Boise State became a somewhat less remarkable program. They didn’t slide much, but they are no longer the undisputed premier mid-major football program. Their claim to fame was a legendary win against Oklahoma (proving a mid-major could do it), and since then other programs have accomplished the same feat. Second, the Mountain West Conference has struggled somewhat to keep up with the American Athletic Conference (formerly the Big East). Further, Boise State’s needs started differentiating from the other programs in the conference. Boise State’s primary interests were exposure and money, while the rest of the conference wasn’t getting the same exposure opportunities and suffering from odd and late kick-off times.

When it came time for the Mountain West to negotiate for a new contract, the rest of the conference was interested in minding their own concerns. Fox and CBS could not offer the same exposure as ESPN, but they could offer more money at the times that the Mountain West Conference wanted to play. So the conference signed over their games to Fox and CBS, including Boise State’s home games3. Further, they announced that after this contract they had a vote and were no longer going to negotiate Boise State’s contract separately. The votes were bundled and it went 11-1.

And so Boise State filed a complaint (PDF). Their complaints:

On the surface, at least, Boise State’s case seems iron clad and I am not really sure what the Mountain West Conference is thinking here. They signed the deal that they signed. Boise State is in their conference because they signed it and the Big East (now American Athletic Conference) would not. There is no way to realistically argue that Boise State consented to the change. The best that the MWC can say is that Boise State has not suffered any damages yet and so has no grounds to sue and I’m not sure that holds because “Doesn’t play on ESPN” almost certainly constitutes “harm” insofar as the exposure of ESPN is important to Boise State as it clearly is.

The only thing that makes sense to me is that this is ultimately all about that third part. All over the complaint are references to how important Boise State was to the television contract and the assurances they got that their value would be reflected in conference distribution. Given that the TV deal expanded three-fold, that could theoretically give Boise State an additional $5.4m above and beyond the $3.9m that everyone else is getting. It could be that negating the special deal altogether is the opening of a negotiation just to prevent that from happening. Likewise, Boise State demanding so much in the complaint could easily be the same. All of this could be a long way around to a status quo of Boise State continuing to earn a couple million more than everyone else.

The most likely outcome, as far as I am concerned, is that they will work things out. The Mountain West really does need Boise State. Other programs such as San Diego State and Fresno State may have elevated in recent years, but Boise State is important. Boise State being in the conference is a difference between being a peer of the American Athletic Conference and Conference USA. If Boise State left, the contract would be renegotiated and they would each be earning considerably less money. This is a big part of why Boise State feels so entitled to make the demands that they have. For every dollar they are demanding, they are generating a buck fifty.

However, there is a reason that schools do not typically make the sorts of demands that Boise State has. It causes instability, and a good conference situation is worth a lot. A school like USC might be able to demand more money from the Pac-12, but while the other schools benefit from the USC generates, USC benefits from being in a conference, having a slate of opponents and rivals, and all that goes with it. There is a reason schools almost never want to go it alone. The University of Texas managed to wrangle more money out of its conference, but they now play in a diminished conference because of it and it probably hurt the program more than the revenue helped it4. It’s money, but it’s expensive money.

In Boise State’s case in particular, they do not have good conference alternatives. Most of the reasons that they chose the Mountain West Conference over the (now) American Athletic Conference still hold. For a variety of reasons it’s difficult to compete when you are out of your geographic pocket (see West Virginia University) and the closest team to them would be in Tulsa. They would need to find a home for their other sports (the invitation to the Big East and any invitation to the American Athletic Conference would almost certainly be limited to football). They still wouldn’t get the special consideration they are demanding of the Mountain West Conference5. Independence is not a likely path. No invitation to the Pac-12 or Big 12 is forthcoming.

The relationship between the Mountain West Conference and Boise State has always been unusually blatant in how transactional it was. The MWC dragged their feet for years before issuing them an invitation because they didn’t want to have another way to divide conference money. Then they negotiated an entry but quickly tabled it when they thought they might be able to snag a couple of Big 12 schools. Then they did issue the invitation but added some really petty rules (which uniforms they could wear at home, for example). Then Boise State bolted at the very first opportunity for a risky situation and only agreed to come back with the aforementioned conditions. This is the latest chapter of a very long story.

Ultimately, though, both the school and the conference need each other and so will probably work it out. The messy process is ultimately hurting everybody, however.