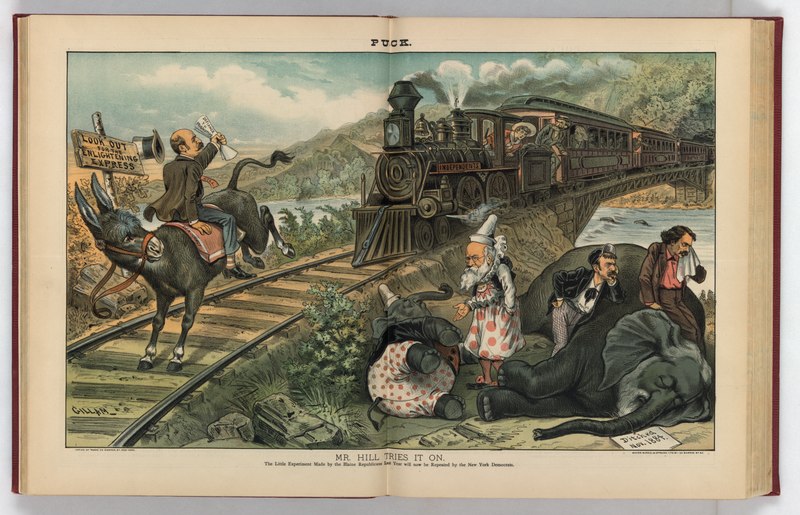 We are now a little over a year into the endless slog that is a modern Presidential campaign. And during that time…very little has changed. Despite fielding some 20 candidates, Biden has maintained about thirty percent of the vote, Sanders about 20 and the remainder dividing the other half. We’ve seen several Warren surges but she’s stabilized at about 15%1. Buttigieg had a brief surge but has now faded back to the pack. Harris is gone. Beto is gone. Mike Bloomberg is “surging” now to a whopping 7% but I expect him to fade away as people remember that he’s Mike Bloomberg.

The analogy I made on Twitter was that the Democrats are in a candidate store. They have Biden in the cart. And they like the Biden. It’s not bad. But they’re not completely happy with it so they keep taking other candidates down to check them out. They tried the Harris but the reviews were bad. They tried the Warren but it was too expensive. For a time, they toyed with the Buttigieg but some family members didn’t like him. They’re still glancing over at the Sanders, wondering if he’s the better choice. But they’ll probably go home with the Biden.

I’ve made the comparison, at times, to the way the GOP settled on Romney in 2012. Other have made a comparison to the GOP in 2016. And superficially, the 2016 GOP primary and the 2020 Dem primary bear a resemblance: dozens of candidates, occasional surges against the front-runner. But I would disagree. In 2016, the depth of the GOP field represented the party’s strength. In 2020, the depth of the Dem field represents the party’s weakness.

A Tale of Two Fields

Let’s take a look at the numbers. One morning, I played around with the primary polling numbers to produce what I call a “poll-weighted age” of the field. That is, the average age of the candidates weighted by their peak poll numbers. This is the result:

That’s…a pretty big difference. And that’s before the field narrows to Biden, Sanders and/or Warren, which will only push that age upward. Almost all of the young candidates in the Dem field have dropped out or are languishing in single digits. By contrast, Kasich and Cruz held on to the bitter end, denying Trump a majority in any poll.

That age distribution tells you something. A political candidate’s prime years tend to be in their 50’s. It used to be rare for Presidential candidates to be old enough to collect Medicare. When Reagan was elected in 1980, there was a lot of talk about how he was the oldest man to be elected President. And he was 66. Trump broke that record by being elected at age 70. The current Democratic front-runners are 77 (Biden), 70 (Warren) and 78 (Sanders). And while they are all in decent health — the odd heart attack aside — they are at an age where physical and mental health can decline very fast.

Of course, in the 2016 GOP primary, the oldest candidate won. So doesn’t that tell us the GOP was equally weak?

Take a look at the fields again. Of the top 16 GOP candidates in 2016, nine were governors, five were senators and three were outsiders. The Democratic field has seven senators, seven House members, five mayors and three outsiders. The three governors in the field — Patrick, Hickenloopper and Inslee — have gone precisely nowhere. It’s such a weak field that the Mayor of small midwest town is among the front-runners and gaffe-prone septuagenarian Joe Biden has fended off all challengers so far. And those main challengers would be a one-term Senator from Massachusetts and a socialist crackpot from Vermont who is, technically speaking, not a Democrat.

But let’s look at history again. It’s rare for someone to go from Senate to White House (although Will expressed the opinion that it may become more common). Look at the Presidents over the last century and the last office they held before becoming President.

The simple fact is that Congress is not typically where we draw Presidents from. We typically draw them from the ranks of those with executive experience and typically those with some experience as a governor. That the Democratic field is overloaded with Congressmen and that none of these Congressmen have been able to get very far is yet another piece of evidence that the Democratic field is weak.

And that weakness did not just happen. For all the talk of how Trump is going to doom the GOP, the GOP’s farm system is far stronger.2 We’re seeing, on a national level, the results of the Dem Party’s collapse at the state level under Obama.

The Obama years were a very mixed bag for the Democrats. Because while they held the Presidency, their national presence went into freefall:

Over the past eight years, the Democratic Party has lost a mind-bogglingly large number of races across the country. Their share of seats in the United States Senate has fallen from 59 to 48. They’ve lost 62 House seats, 12 governorships, and 958 seats in state legislatures

This has, of course, created a secondary problem with gerrymandering and the like. The Democrats have recovered somewhat over the last few years, taking back the House in 2018 and winning back a few state legislatures. But the GOP still controls the vast majority of state legislatures and outnumbers the Democrats in states where they control both the governor’s house and the legislature.

And that matters a lot. It matters because states are where the majority of policy is implemented. It matters because states are where bipartisanship and functional government start. But, in this context, it matters because state legislatures and governorships are where you really build your party at the national level. That’s where you get the candidates you need for Congress and ultimately the Presidency. Half of Congressmen started out in state legislatures. Many recent Presidents started out as governors. They get there because they cut their teeth at the state level — implementing policy, learning to compromise, finding ways to get things done. They get there because states (and even local government) are where you build support for your party generally. If people see that their local Democrat got something important done, that makes them more open to national Democrats.

It comes to this: if you are failing at the state level, that failure will propagate upward to failure to the national level.

Again, go back to the age distribution of the Democratic candidates. The strongest ones are either old (Sanders, Warren, Biden) or very young (Buttigieg). But the prime years for a Presidential candidate tend to be their 50’s or early 60’s. And the only candidates we had in that range were Booker, Harris, Klobuchar, Steyer, Delany and Klobuchar. None of them were particularly strong. All of them except Steyer were from Congress. The dearth of strong middle-aged candidates represents, if you like, the “lost generation” of Obama-era Democrats.

With the lack of national figures and experienced politicians at a national level, is at any wonder the Democrats are turning to ideology (Sanders/Warren), raw political ambition (Buttigieg) or nostalgia for the past (Biden)?

Andrew has been talking a lot recently about how our political sickness at a national level is a result of political apathy at the local and state level. That we have made politics more of national spectator sport than what is should be: an unwieldy, boring but necessary way of getting things done. We see politics more in the romantic sense (“Change we Believe In!” “Make America Great Again!”) than in the practical sense (“Let’s fix some bridges and maybe expand insurance a bit.”). This weekend, the Atlantic ran a dynamite article about how the intellectual elites are wrecking politics by approaching it as an abstract spectator sport rather than as a boots-on-the-ground day-in-day-out grind. We’re far more interested in the latest meaningless Twitter outrage than whether our local sewer system is up to spec.

The more I think about it, the more accurate Andrew’s take seems. The disease of politics at the national level — partisan squabbling, a dysfunctional legislature, a reality-show hamster in the White House — has its roots in the failure at the state and local level. I can’t help but be reminded of a quote from I, Claudius about the Emperor Caligula:

No. Rome is sick — sick to its heart. He’s just the rash its come out now.

Trump is one manifestation of our national sickness — a candidate who has no ideas, no experience, no ability to compromise or govern. He’s the ultimate embodiment of politics as a spectator sport, defined entirely by his hostility to the other side. But the Democratic field reflect that sickness too — the inability to build from the ground up, to see the federal government as just one level of governance rather than the whole smash, the lack of people who worked their way up through the ranks to be in a position to win and get things done.

There are a lot of people who think that if Trump is vanquished in 2020, that will move our politics to a healthier state. I’m not sure of that, especially if a radical like Sanders is elected. But, at most, it will be the reckoning that the GOP needs to deal with. The reckoning for the Democrats is still coming.