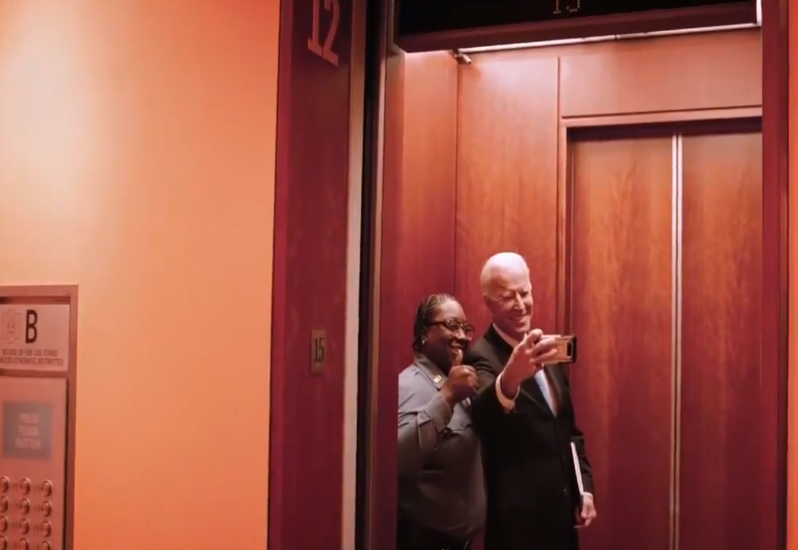 The thing about reality shows is that, no matter how much you try to script them, once in a while reality actually seeps in.

The political news this morning has been focused on the endorsement by the New York Times Editorial Board of, and I’m going to quote them here because there is no coherent way to explain this otherwise:

This split endorsement was a laughable letdown after the NYT held a televised, highly promoted, “most transparent endorsement ever” extravaganza to announce their endorsement. But, hey, they can do what they want. Before choosing their candidate(s), the board met with each candidate and they uploaded 30,000 words worth of transcripts from those meetings (which can be found here). FX’s “The Weekly” condensed those meetings into a few minutes of each candidate in an hour-long episode that minus the failed landing was actually pretty informative and creative.

The last candidate they interviewed was, of course, Joe Biden: former VP, former senator, and frontrunner in this campaign from the moment he entered it. I will hold up my hand and admit I’ve not been impressed with how Joe has played his hand in this campaign. Gaffe prone, with 40 years of votes and positions that would be problematic to the progressive base, and a history of two presidential campaigns that imploded under mistakes ranging from horrible campaigning to plagiarism, I didn’t think Joe Biden was the man for the moment. I even wrote back in April, right before he jumped in and I was frankly hoping he wouldn’t, about the concerns with him making a third attempt at the White House:

If you want to wager that — in what will be hours of footage per day for the next 10 months until voting starts — we can go without a major Joe Biden gaffe or controversy, you are betting against time, tide, and 70+ plus years of recorded history on the man.

Well, Joe is still Joe: gaffe prone and with plenty of controversy in his background. But, so far, while the voters have kicked the tires on a few other candidates, they keep coming back to Joe. His poll numbers are, for all practical purposes, right where they were when this all started last April. A large group within the Democratic party doesn’t care or, more to the point, doesn’t think they have a different, better option.

But while the New York Times Editorial Board was not impressed with Joe Biden, the security guard in the elevator was.

Could the Biden campaign have asked for better optics than this: an ordinary worker gushing over him while the New York Times editorial board decides to not put him in their top four choices? pic.twitter.com/5fBj4EoxwO

The New York Times Editorial Board had a large conference table in a big room with the New York City skyline as the background. It had very serious people thinking very seriously about their very serious endorsement. It was weeks, if not months, in the making and culminated in an edited-for-TV hour of very serious discussion. And it’s been obliterated by 20 seconds of viral video that, as of this writing, has been viewed six times more than the videos of the Grey Lady’s endorsed candidates. Both of them. Combined.

We don’t know much about the lady in the elevator, and I hope to God the media leaves her alone. But, because of how she reacted and talked, I’ll bet she is exactly the kind of person who is going to stand in line to vote. Unlike the folks around the fancy table, she wasn’t moved by high minded ideological arguments, or how her choice might look to other people, or how she might influence others. She just looked at Joe Biden and said things like “I love you…I really do” and “You’re my favorite” and a thankful “You are awesome” to Joe asking her name and telling her they would get a picture together. This is Retail Politics 101 from someone who has done it their entire life.

Most of this hubbub about the New York Times endorsement will fade by the end of the day. Their gimmicky silliness — picking two candidates and hand waving “may the best woman win,” when everyone who has bothered to watch the coverage of this race at all knew the pick of that group of folks was going to be Warren — was yesterday’s news by noon.

But moments like that elevator scene, in a race that has precious little real moments in it, will resonate more. For a candidate like Joe Biden, who has been coasting on inertia and a field too weak to mount a serious challenge, little moments like that are all some folks will need to go with what they are comfortable with in a very uncomfortable political season.