What the Houston Astros Teach Democrats About 2020 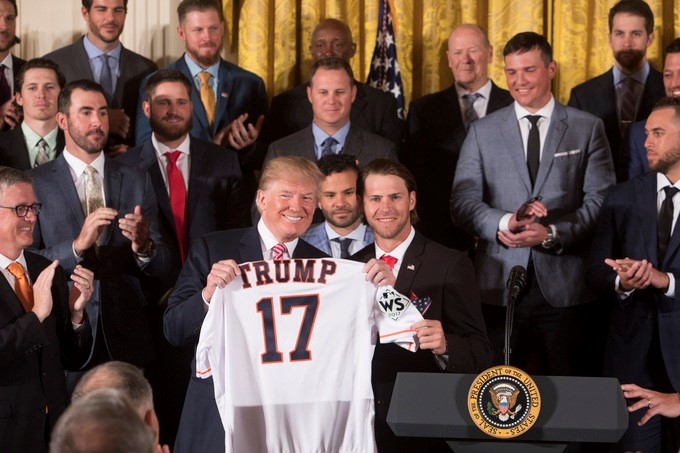 The Lowdown on The Low/Down

In 1981, the Oakland A’s baseball club set an record for attendance since their move to Oakland in 1968.  This is one of my favorite random facts, because it is absurd for two reasons:

So how in the universe did this happen?  Well, in August 1980 the A’s were sold to an owner who was not a glowing spite orb.

Previous owner Charlie O. Finley was shrewd, and he upped the entertainment factor in many ways – bedecking his teams in green and gold instead of usual baseball colors, paying his players to break tradition and grow mustaches, and having mules as mascots – but he also resented having to pay his players what they were worth for their baseball (as opposed to their hair), and he was so brazen in trying to sell his team before the debut of free agency that the commissioner blocked him with his “best interests of baseball” power.

Sometimes it isn’t a tough crowd. Sometimes it’s a tough person who dispels the crowd – or, as Thomas Boswell wrote of Finley as he sold the team – a “vain, obnoxious and brilliantly eccentric” person who gave a “farewell in which he was maudlin, caustic and bitter.”

On The Opposite Coast…

Contemporary Yankees owner George Steinbrenner was not much nicer of a person than Charlie O. Finley.  He fired managers like he was clearing a closet for the new seasonal wardrobe. He threw his players under the bus regularly.  And he was suspended for years for hiring a gambler to dig up dirt on a player who’d sued him…for not donating to the player’s nonprofit like the contract said he would.

But when his teams started winning, people showed up more. And the controversies and mistreatment didn’t send anybody home; only bad team performance did.

So what was the difference?  Why could George Steinbrenner pack the ballpark while being a jerk in a way Charlie O. Finley could not?

I’m not sure, but I think it comes down to one thing: Steinbrenner was cruel to nearly everyone but his fans, while Finley was just cruel.

It Isn’t That You Cheat; It’s Whom You Cheat

George Steinbrenner cared about the image of his team, with strict hair regulations nearly from the beginning.  He also loved the free agency Finley despised, because he could try to buy the best team.  Even though he was clearly horrific in many other ways, he cared about his team in ways fans could relate to – perhaps the yell-at-the-TV sort of fan, but the point stands.  His raging fire to be successful resonated with millions of New Yorkers and fans around the country, even as that same exact fire burned all it touched.  Did the average fan care that Steinbrenner tried to bring one of his star players into scandal through dirty tactics?  Nope; he wasn’t ruining their lives.

But Finley alienated everybody and reveled in it. Pick a paragraph at random from this 1979 article and it’ll jump out at you.  He was against the fans as much as he was against anybody else, so the fans were against him. Steinbrenner was for his fans and against everybody else; the fans ignored the second part and were for him.

And that explains part of why the majority of people surveyed want Pete Rose to be eligible for the Hall of Fame but steroid users not to be.  It’s well-known that Pete Rose is unsavory, but what is known about his flagrant awfulness does not point at him cheating the fans out of a game.  Although steroids’ exact effectiveness is debated, the perception, not just from fans but from the players who have lined up to get them or other cheating enhancers, is that they give unfair advantages. That cheats the fans out of a game. So they care in a way they can’t make themselves care about gambling on your own team or being loathsome in other ways (such as domestic violence).

The Astros and Donald Trump

And that ties up neatly into two intertwined subjects: the Astros (and Red Sox and Mets) losing their managers and more for cheating during games, and the impeachment proceedings against President Trump. President Trump is a Finley-in-Steinbrenner’s-clothing: be furrowed-brow serious about loads of things, show a raging fire to be successful, and the fans will show up without caring that it undermines everything or that he’s demonstrably nasty.  (Steinbrenner and Trump were buddies; that makes Trump the second impeached POTUS Steinbrenner supported, impressive for being dead since 2010.)  But that’s the key; like Steinbrenner and like Pete Rose, he does not give his fans the sense that he has cheated them out of something.  So it is hard for them to care about all his cheating, because it hasn’t affected them.  They’re on the winning team; what does it matter?

While it’s unclear to what extent the Astros’ scheme was useful, just like with steroids the perception from the players that they should keep it going for a while is enough to cement that the players involved cheated the fans out of a game. Not their own fans, mind you, but everyone else’s fans – who outnumber them roughly 29 to 1. And players whose teams were defeated along the way are all too happy to line up and say they feel cheated (even as their own teams are being accused of skullduggery).

None of it would truly matter except that the Astros have been punished quite a bit for what they’ve done (Jay Jaffe‘s report on it draws conclusions similar to mine), and now the cheating team’s fans have had their cheating affect them. They almost won the 2019 World Series; now they don’t have a manager or a general manager.  They might not be on the winning team anymore, so it will matter.  Domestic violence and steroid suspensions (that keep those players from being in the playoffs at all) affect the team with the villains, (theoretically) encouraging fans to care because now they have been deprived of something, the way others were deprived of fair games or happy lives. Fans as a group do not want true change – are not motivated toward change – until something is taken from them, whether the fandom is of a baseball team or a politician. It is as selfish as it is natural.

So what it will take for Trump’s fans to abandon him? The same thing it took this week for people to sit up fully and care about baseball cheating – make it affect them. This is hard to do, in large part because Mike Pence becomes the president if Trump is impeached and because the government shouldn’t spite its people.

The Democrats have loads of advisers working on loads of things. And if they’re not working on this, from election experts to congressional advisors and everyone in between, they won’t get people to care. The Democrats talk about Trump like he’s Charlie O. Finley because he is Charlie O. Finley, but he’s George Steinbrenner to his fans. Figure out how to goad him (seems doable) into an action his fans will take adversely, and they’ll be getting somewhere. Maybe Democrats should talk actively about how Trump’s bellicose petulance put U.S. troops and national security in very real danger. I’m sure the case can be made, so why not make it?  Realistically, Democrats will have to make that case, or something analogous, to get his fans to stop supporting him by November.

In the meantime, spring training starts next month. I hope my Red Sox find a manager who doesn’t cheat.

Brandon has written a baseball book, has playtested a video game for a living, has written a law that gives specific powers to himself, and is proficient at making his bio sound more impressive than it is. He is @restlessmosaic on Twitter for non-baseball content and @baseballspotlit for baseball content.