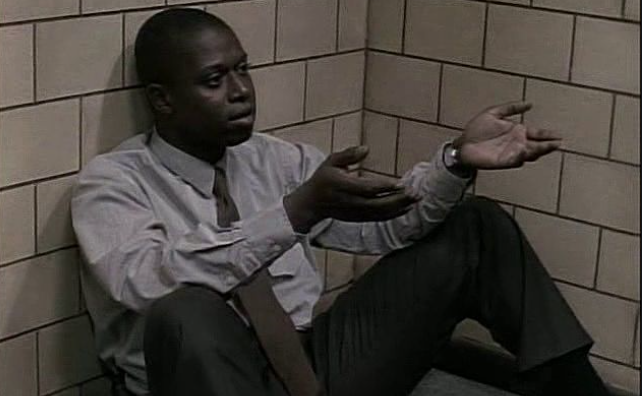 Andre Braugher has opinions regarding neckties.

Or, at least, his characters do. Two specific characters in particular — both cops — fixate on the accouterments, one introduced to audiences in 1993 and the second still visiting us once a week since hitting network TV in 2013. It is perhaps appropriate, then, that the two roles, arguably Braugher’s most acclaimed, may just bookend an acting career that began in 1989, as an outfit is completed by his beloved necktie.

In the seminal ‘90s police procedural series “Homicide: Life on the Street,” we are introduced to Detective Frank Pembleton not directly, but as the topic of conversation among his peers over a tray of Baltimore blue crabs; one of them doesn’t like his ties. Twenty years later, we are blessed with Capt. Raymond Holt, who spends much of the first episode of “Brooklyn Nine-Nine” imploring one of his particularly subversive detectives to complete his plainclothes uniform and put on a damn tie.

For the first episode of “Homicide,” which preceded “The Wire” in writer David Simon’s transition to television production, the wisecracking detective Beau Felton (played by Daniel Baldwin) kicks off the return from a commercial break by complaining, true to form, to the rest of the crew.

“What’s with the ties he wears?” he asks.

In a following scene, we are given Braugher’s first on-screen appearance as Pembleton, and he is of course finishing up on his trademark necktie while waiting for the boss, Al Giardello (played memorably by Yaphet Kotto). Giardello is here to foist a new partner upon Pembleton, who is by reputation a loner, and Pembleton won’t have it.

“You need to be more of a team player,” Giardello says through a fatherly grin.

This plot point begins to build parallels between the two NBC series that go beyond Braugher and his neckties. In the pilot for the more comedic “Brooklyn,” Detective Jake Peralta (Andy Samberg) can’t help but be a goofball at the precinct, which means he immediately runs afoul of dry, by-the-book Holt, within seconds of Holt arriving to take over the precinct.

“The next time I see you, I’d like you to be wearing a necktie,” Holt commands, pivoting away to his new office (where we get a good look at his classic skinny black tie).

“Speaking of ties, where’s yours?” Holt asks later, surprising his crew at a crime scene.

“And while you’re at it, you can buy yourself a tie,” he quips after ordering Peralta to go interview a person of interest.

Peralta eventually adopts his tie while being disciplined (although he comically sacrifices his pants to troll Holt), but it’s only as the end credits roll that he realizes Holt isn’t simply being a hardass. An effective team requires a certain level of uniformity. Operating under enough similar conditions creates a certain solidarity among an otherwise diverse team.

Returning to the first season of “Homicide,” Giardello nags Felton for his similarly cavalier idea of a work outfit.

“Look, I’m not going to remind you about this again,” Giardello warns. “A tie is the dress code. You’re not working narcotics.”

In a later first-season episode, the homicide unit is working a night shift during a heat wave, with a broken air conditioner. Throughout the episode — as shirts are untucked, buttons unbuttoned and sleeves rolled up — Pembleton stubbornly adheres strictly to uniform, despite Giardello waving it off as “temporarily suspended.”

“Take that tie off!” Giardello grits, pointing a finger. “I’m sweatin’ just lookin’ at it.”

“Take off that tie, Frank!” he later says.

“Frank. Take off that tie. Learn to relax,” Giardello again urges. (Amusingly, the episode ends at daybreak, with Giardello inviting the unit to the roof for a refreshing hose cooldown. He first targets Pembleton, who unlike his colleagues had failed to disrobe even a little.)

After several episodes, Pembleton ultimately loses his fight with Giardello, with the boss reminding his veteran detective that the green-but-determined new transfer, Tim Bayliss, would walk heaven and earth to solve any murder. Pembleton only has one retort to give before resigning to fate and leaving Giardello’s office.

“And I don’t like his damn ties,” he proclaims,as though that settled the matter. 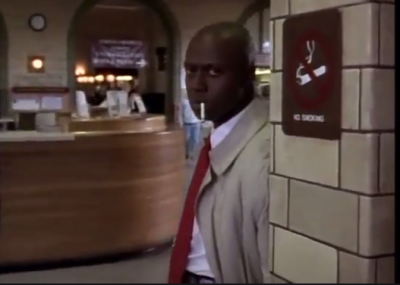 The multi-Peabody-winning “Homicide” carried an ensemble cast throughout its seven seasons, but Braugher’s performance was the signature of the series for all six of his seasons with the show. No character would match chain-smoking Pembleton’s rhetorical intensity — backed by the character’s Jesuit background — or the emotional depth Braugher could give the character through his loss (and recovery) of faith, a stroke or a near-divorce while he and his wife went through reproductive therapy.

If Braugher as Pembleton complemented his skill with cockiness, Braugher as Holt — who enjoys unseasoned grits and trains his corgi to strut in form alongside him — calmly lets the weight of his reputation do the talking. In a flashback, we see the younger Holt apprehend a legendary killer as, of course, a homicide detective. (He is sporting a wider diagonally striped tie here, alternating between purple and yellow-embossed pewter.) In many ways, Braugher is emulating his old co-worker Kotto in “Brooklyn,” serving as the protective mentor who threads the needle of drilling process and procedure back into his subordinates while also succumbing to their shenanigans. Most on-the-nose of all is an episode of “Brooklyn” that centers around the interrogation of a suspect at the precinct, which was a fixture of “Homicide” and served as Pembleton’s claim to fame.

“Homicide” was at the time lauded for its diverse cast of complex characters — in addition to Braugher and Kotto, other black or mixed leads throughout included Clark Johnson, Toni Lewis, Michael Michele and Giancarlo Esposito, each of whom received NAACP Image Award nominations for their roles. Armenian-American Callie Thorne and Puerto Rican John Seda both joined for two seasons. Richard Belzer’s original run as John Munch — whose Judaism was the theme of the episode titled “Kaddish” — began in “Homicide.” Pembleton’s partner Bayliss (played by Kyle Secor) began to explore his bisexuality fully by the seventh season, which garnered a GLAAD Media Award nomination. 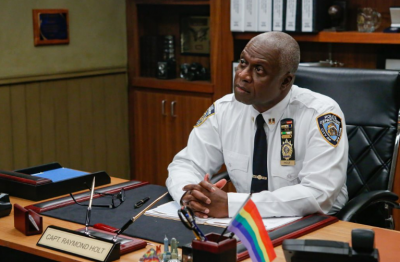 “Brooklyn” adopts a similarly non-performative focus on diversity and includes much more direct looks at breaking social stereotypes. Holt’s character is openly gay and his equally deadpan husband is a supporting character. Samberg brings his Judaism with him as Peralta, and has a recurring bromance with Craig Robinson. Latinas Melissa Fumero and Stephanie Beatriz form an excellent juxtaposition with their styles as detectives, with the latter’s character coming out as bisexual eventually. Bodybuilding Terry Crews (also an Image Award nominee) can’t wait to play dress up and have tea parties with his toddler girls. Joe Lo Truglio is a hapless but earnest dork and foodie. Chelsea Peretti plays an utter narcissist. Fittingly, “Brooklyn” and Braugher are presently up for both GLAAD and Image awards.

The depressing and existential realism of “Homicide” still sets the series apart from its counterparts in the undying Law and Order franchise (with which it would occasionally cross over for a few episodes), and “Brooklyn” — which returns for its seventh season on Feb. 6 after, like “Homicide,” repeatedly fighting threats of cancellation — is equally distinctive not just for its humorous take on the cop show, but for the mature growth and self-awareness among all characters that arises from its humor.

At the end of the day, you could say the two series are in many ways intertwined — or tied together.