Saturday Morning Gaming: Baba Is You

Baba is you is kind of a strange puzzle game to try to describe. It’s one of those games that has the rules written right on the board as you play. The first, most important, rule is “Baba is You”. It’s written right there on the board and lit up and everything. Yep, you’re the lamb. Move around with the arrows.

In the very first part of the game, the opening level, there are four simple rules on the board:
Baba is You
Flag is Win
Wall is Stop
Rock is Push 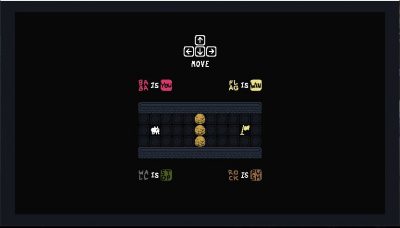 Use the arrow keys to move around. You might, at first, say “okay, just go to the right, push the boulder a couple of times, down arrow once, go right a few more times, go up, touch the flag, and WIN!” Indeed, that’s something that you can do to win the level. But if, instead, you left that little hallway, you could mess with the rules on the board. What if you didn’t like the fact that the wall was a barrier? Well, you could do this: 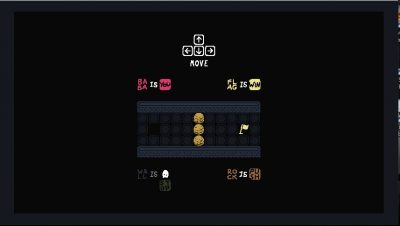 And now you can walk around on the walls.

But what if you just didn’t like where the walls were? Well, you get behind the Push square and move it around and create a new rule: Wall is Push: 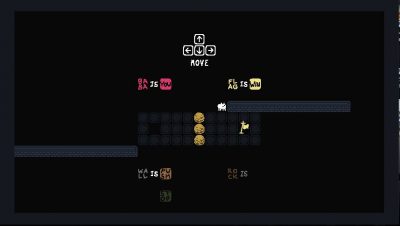 And now you can push the walls around.

Change the rules, change the game.

Still win by touching the flag. But you can also push the flag square and create a rule where “Flag is You”. Now you’re no longer the sheep pushing things around, your character is the flag. Push the Baba square around and put it so that “Baba is Win” and then go and touch Baba. 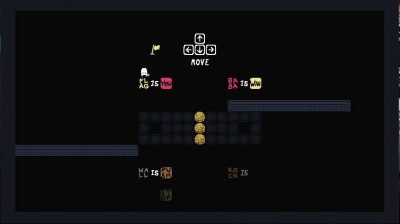 Shortly thereafter (like the sixth puzzle), you’ll see this: 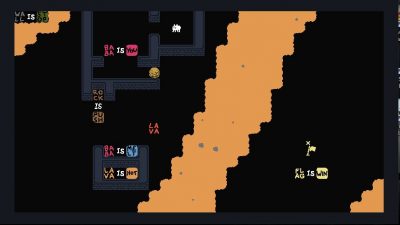 What’s your main takeaway from that just looking at the puzzle board? Now, I’m not asking you “how do you think you will win?” but asking you to notice the “Rock is Push” rule. You see how it’s not horizontal but vertical?

And now you see all of the tools you’ll have at your disposal. Rules that be pushed around, rules can be both vertizal and horizontal, “you” are not required to be the Baba (but that’s usually your starting place), and the rules for how you win at the beginning of the level are not necessarily the rules for how you’ll actually win the level when you make your final move.

It’s a game about the rules of the game. (It’s available on Steam for $15 but it goes on sale all the time.)

(Featured image is a screenshot of the starting moment of the tutorial level of Baba is You. Screenshot taken by the author.)