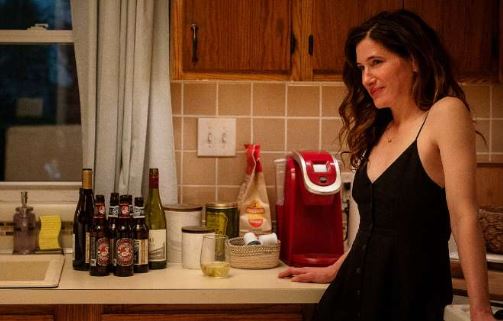 Is pornography a harmless diversion, a thing of fantasy, an aid and focus for real-life libido? Is it a demeaning, dehumanizing corruption of human sexuality and a barrier to actual sexual and romantic intimacy, particularly for women? Or is it, however improbably, a gateway to empowerment, self-knowledge, and freedom, especially for women? The story of “Mrs. Fletcher,” a limited series currently on HBO based upon a novel by Tom Perrotta, tries to have it all three ways, but does, in the end, deliver a verdict.

Eve is an empty-nest, divorced-with-no-romantic-prospects mid-40’s woman employed at a senior center. A variety of circumstances ultimately tempt her to look at pornographic videos on the internet, which catalyze her curiosity about her own sexuality just at a time that she has new-found freedom to explore experiences and possibilities she had set aside during her marriage and later single motherhood. Then, having tasted online of the forbidden fruit, she is thereafter cast out of her garden and into a larger, more emotionally dangerous world where her new fantasies make her at once uncomfortable and emboldened.

Her son Brendan is a good deal less sympathetic. Seemingly effortlessly good-looking and arrogant, he ignores his mother’s attempts to give advice and guidance, seduces naive young women through questionable means, and bullies a sensitive and smart classmate, Julian. We never see him viewing pornography, but his sexual behavior amply demonstrates how thoroughly he’s internalized it. His transition to college life is far from effortless; he finds himself surrounded by people his age who do not appreciate his crude jokes, unnerved by college womens’ attitudes about sex and relationships, and unable to understand an environment where he is forced to respect people around him that he previously would have mocked.

No longer popular, uninterested in academics, and frustrated in his attempts to either find female companionship or male friendship, Brendan grows more and more at sea at college. Meanwhile at home, Eve finds herself classmates at a community college with Julian, who develops a crush on Eve. Eve forms friendships with the instructor and her fellow students, some of whom have unorthodox journeys of sexual exploration and maturation to explore on their own as well. At its best, many of the characters are seen presented with opportunities to make real romantic connections or to pursue fantasies they know to be unrealistic and which at some level they won’t admit to themselves, can only ever produce evanescent pleasure.

Eve’s classmate Curtis is perhaps a little bit too perfect of a human being; the collegiate experience is perhaps a bit too heavy-handed in its portrayal of progressive academic culture as a force for social isolation; and the psycho-sexual dynamics of the show’s culmination are perhaps a bit too strongly projected. But these flaws are overshadowed by the show’s strengths. Kathryn Hahn is luminous, brave, and emotionally direct, delivering a remarkable performance of Eve’s journey. Brendan’s story becomes very complex. The show keeps a tight schedule with only seven episodes of just over half an hour each; if you’re the type to binge-watch, the whole series is about as much time as any one of the Lord of the Rings movies.

Since the show doesn’t actually take that much time, it’s easy to say that the show is worth your time. There is less nudity than the subject matter might suggest. But, it’s definitely not for the prudish or for the immature. The cultural and social feel is very fresh and contemporary and for that reason may well be like a pear: it should be consumed while it is still ripe. It falls somewhere between “occasionally dark comedy” and “light drama,” and by the finale you’re left with narrative satisfaction (okay, that’s how it ended) but not a lot of emotional closure (just what exactly happened there?) so you’ll have to do a bit of thinking on your own about things like what a home is, what intimacy is, how we deal with loneliness, and most of all, how the pressures we accept within ourselves about sex influence our behavior and our happiness.