They say that New Year’s Resolutions never work. People promise themselves the moon when it comes to going to the gym and going on a diet and next thing you know they’re in the basement with a “do not disturb until February” sign on the door eating a tub of cookie dough.

I have been pretty good about going to the climbing gym, believe it or not. I’m still not fully recovered from the month off that I took last year, but I’m back to climbing twice a week and there are things that are easy that remain easy and the only problem is trying to wrap my brain around the things that are medium but are, for some reason, still impossible. (Today, for example, my foot slipped on a slippery hold and, dang, I had brain-lock and needed to get on the ground ASAP. I know, intellectually, that if I am not falling then I am not pushing myself but, dang, when my foot slipped off, I said NOPE NOPE NOPE GET BACK ON GROUND NOW. I need to overcome that.)

I have not been pretty good about jogging. I need to get back to being merely crappy/mediocre on jogging.

I eat too much bad stuff. I don’t eat enough good stuff. The bad stuff tastes soooo good, though! The good stuff takes too long to prepare and doesn’t taste as good.

Wine has a LOT of calories. They need a low-calorie altered-consciousness substance.

As such, this weekend will be devoted to trying to figure something out for the coming year. Maybe not a list of resolutions, but a plan to nudge a habit or too in the appropriate direction. Oh, and a D&D game in my bud’s basement. Oh, and Maribou’s back so maybe I’ll get a decent night’s sleep again.

(Featured image is The Cradle by Berthe Morisot. Painting is in the public domain.) 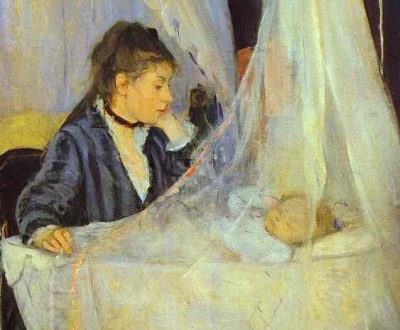