Saturday Morning Gaming: One of the Greats Turns 20 Years Old

In 1999, one of the greatest RPG games of all time came out. Planescape: Torment (Enhanced Edition currently available at GOG.com for $13.99 or at Steam for $9.99) was an amazing game that won all kinds of awards but, more importantly, demonstrated that there were different ways to think about RPGs in the first place. 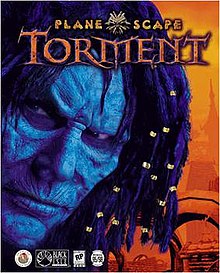 You wake up on a slab. That’s how the game starts. You’re in a morgue. Or the D&D Planescape equivalent of a morgue. A floating skull wanders over your way and asks you how you are and what your name is… AND YOU DON’T KNOW. He tells you his name (“Morte”) and you and he wander around the morgue not getting in fights (well, there are a couple of zombies you have to kill but they’re not tough at all) but engaging in observation and conversation and puzzle-solving. Who are you? What is your name? A mortician treats you like a zombie and sends you on a fetch quest that will result in her stitching you up (and giving you hit points). You find hints as to who you are, learn about what’s wrong with where you are, and what is at stake.

And then there are about a million ways to play the game. Wanna be Evil and Surly? Wanna be Good and Helpful? Do you want to engage in multiple conversations with multiple people and talk your way out of fights but still get XP for defeating the boss that you defeated by figuring out his riddle by looking around and paying attention as you walked around and read all of the journal entries and felt the universe around you grow larger?

You can explore the city of Sigil around you and as you talk to every single person, you’ll find that most of them will either give you quests or help you solve them. You can pick up companions such as a floating pyromaniac, a chaste succubus, or a mechanical creature of Law who has been separated from his hive-mind. And you wander around and solve (or cause) crimes and resolve quests and learn who you are. And the best part is is that most of the quests you have can be solved with conversation and many of the fights you can get into can be avoided through thinking about things first.

It’s a D&D computer game that rewards role-playing so much more than it rewards going in and smashing and pillaging. You feel like a real lost soul, wandering around a surreal dystopia, solving problems through conversation or, as a last resort, violence. And at the end of the game, you find out who you are and what your purpose is.

And what could possibly be more satisfying than that?

(Featured image is the original box art for Planescape: Torment.)