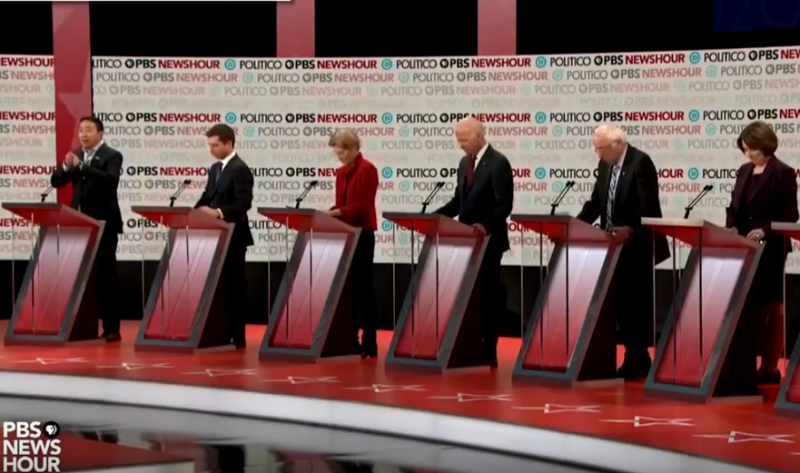 The latest, and mercifully the last, Democratic Debate for 2019 is in the books. Loyola Marymount University was the scene as the field of presidential hopefuls finally managed to contain itself to single digits on the stage in LA. PBS and Politico did the moderating duties.

With the impeachment hangover and the holidays approaching, it’s probably safe to say this debate will mostly be under the radar and quickly forgotten. Nothing really big happened. In fact, that is the theme of these debates for this cycle; nothing really big happens. It SEEMS like something happens, but the tracking polls from April till now show that not a lot has changed.

Still there was some contention. The debate opened with impeachment but didn’t dwell on it. Climate change, corruption, healthcare, foreign policy, and the usual topics were covered in the three hours, and the smaller stage allowed longer answers and some back and forth. So how did the candidates do?

Sen. Klobuchar will get most of the “win” credit for this debate, but it was Joe Biden’s best outing, by far. He had two of his best lines of the entire campaign. The first where he parried “If anyone has a reason to hate Republicans” into an answer on why you still have to try and work in a bipartisan way to get things done was Joe of ten years again, equal parts reaching out and righteously angry. His sound bite where he went full-throated after Medicare for All and the astronomical numbers attached to it, complete with a “This is the first time I’ve interrupted” line, will work well to the folks who like him. Still, he has quite a few rambling answers that seemed to be looking for a point, as is par for the course with the former VP. He handled the age questions deftly, and the smart answer of “I haven’t been elected to a first term yet” to the one term question was as good as you can do with that.

Toward the end of a way-too-long debate, Biden seemed to get caught on saying “I” either as he composed the thought or as part of his well documented stutter/vocal tic. Former White House press secretary and alleged Arkansas gubernatorial candidate Sarah Huckabee Sanders –among others — foolishly made fun of, and quickly apologized for, mocking it on social media. Social media briefly joined together to shout her down, which was a nice, if brief, moment after a rancorous few days on the political interwebs. Two things we have learned in these debates hold true with all that: Outright mocking of the old man doesn’t work (See Castro, Julian), and any debate that Joe Biden doesn’t spectacularly lose, he wins.

Still, there are concerns with the frontrunner. He still wanders around E to get from A to B on answers that go more than a few sentences. He was not pushed or challenged on the Hunter Biden stuff that gets a rise out of the former vice president, and while Democratic audiences do not want to hear it the president, his supporters, and the half-billion dollars in advertising that is coming the nominee’s way is not going to refrain from it, and he better have a better reply than he has so far.  But that is for later. For now, Biden is positioned to win unless someone comes and takes it from him.

Joe Biden’s steady floor in the campaign is higher than the rest of the field’s ceiling so far, and that’s the story of this race. 30-odd percent of the Democratic electorate want safe, steady, and reliable, and they are yet to be dissuaded of that being Joe Biden.

He didn’t lose, for the most part did well, and will continue to lead the field heading into the New Year.

Mayor Pete finally had his frontrunner (at least in Iowa) moment as far as drawing fire from other candidates, particularly from Senator Warren who went after the youngest candidate on stage for his wine cave fundraisers and other donor-related issues. Buttigieg gave as good as he took, pointing out that the senator’s aversion to bundled big money is a recent one, and at worse the back and forth was a wash. He also got into a rather clumsy back-and-forth with Amy Klobuchar over the 1st Amendment. Pete was Pete: prepared, smooth, unruffled, knew his points and hit them while maintaining his bearing. Warren attacking him is a win for him and telling of her slide back down the polling as of late. Pete Buttigieg will have a look at winning Iowa and is as high as second in New Hampshire.  For the Mayor of South Bend, that is wildest dreams territory when he started this campaign. Will he go any further than that? Probably not, but Mayor Pete is poised to rise regardless of the outcome of this election. His nearly 0% numbers with minorities spell anything past New Hampshire as probably the end of the dream, but if so, still an impressive run.

With — let’s be generous and call it a plateau — in polling Elizabeth Warren needed something to facilitate her cheerleaders launching into a “Warren is Surging!!” 5.0. Not sure they got it here, not that they won’t try anyway. The Senator has a habit of disappearing for long stretches of these debates, and her back-and-forths with Pete Buttigieg dominated her night. But for someone trying to climb Mt Biden with the pack of Sanders on her back, spending her time arguing — and not decisively winning that argument — with Pete Buttigieg is not a good thing. It’s hard to see her making a run with Sanders and Buttigieg eating up the blocks of supporters she would need to get to Joe Biden. She has released all the plans, gotten all the press boosts in “Warren is Surging!!! 1.0 – 4.0”, and she cannot seem to get a decisive W in a debate, narrative, or media moment. Hard to see how she wins from here.

She still does not have an answer to her Medicare for All plan when challenged. He flat answer of “They are wrong” when asked about policy experts who disagree with her makes a nice debate moment, but also feeds into the not-helpful debate of the math not adding up. Her refusal to admit taxes would go up, when Sanders is doing that very argument and single-handedly moving that particular Overton Window two podiums over, is glaring for someone staking everything on “I have a plan”. Plans are fine things, but whether it’s Medicare for All, Joe Biden winning, or how she is going to solve the progressive Gordian knot of her and Bernie being in each others way, Elizabeth Warren is running out of time to prove she has answers.

Most of the morning after scorecards will probably have Sen. Klobuchar as the winner of this debate. It was by far her best outing, with plenty of good soundbites and one liners. She bogged down a bit tangling with Pete Buttigieg, and her taking up the Cory Booker mantle of “Why are all of you fighting!?!?” for that well-worn debate high-spot aside, she came off the best she has the whole campaign. Will it matter? Hard to see a path forward with two others ahead of her and clogging the moderate lane she needs to inhabit, but she justified her continued. inclusion in the race and came off very well.

Vintage Sanders performance. He managed to stay on the right side of the always perilous happy warrior Sanders/angry old man Sanders ratio for this one. He has been buoyed a bit of late with Warren’s failure to advance, and some polling has him now leading in New Hampshire. The problem with Sen Sanders’ campaign is two fold. First, and this is an old problem, he is Bernie Sanders: good, bad, or indifferent his ceiling in the party is what it is and does not appear to have much growth potential beyond the chunk of support he currently has. The second is, with both him and Elizabeth Warren now in this race for the long haul and splitting the progressive vote, they are effectively canceling out their segment of the primary electorate while the inertia of Joe Biden rolls onward. Neither can win with the other in the race, neither will quit, and the result is neither is going to be the nominee.

Andrew Yang has an amazing ability to say something that sounds smart, seems really insightful, and is really ridiculous all at the same time and get applause out of it. He wore a “Math” lapel pin, which was interesting, and other than a bizarre moment where he clapped at Judy Woodruff during the start of debate when she said his name in error had a good showing. His answer on the diversity of the field question was probably his best line. With Tulsi Gabbard dispatched to the ether, rightward social media took up the cheerleading of Yang in this debate, but this is a Democratic primary, and social media trends does not a campaign make. It is doubtful he is a factor going forward when the real votes start coming.

Tom Steyer spent tens of millions of his own money to stand on the edge of the stage in a Democratic debate and be the elephant in the room while the other candidates derided billionaires. That was fun. But at least he made the stage, unlike that other billionaire in the race. Him and Bloomberg will continue to single-handily make the networks quarterly revenue go up with their ad buys, while not mattering in this race at all.

A debate with lots of activity, some good soundbites, but nothing earth shattering or even narrative shifting. This debate is set up to be like all the previous: a reminder of a rather static race, and quickly moved on from for more important matters. Like Iowa, New Hampshire, Nevada, and South Carolina, where the votes will start counting for real. With most folks tuning out politics with Impeachment on hiatus till the first of the year and the holidays upon us, the time for any candidate to change the trajectory of this race is rapidly coming to an end. Which mean the horse race that really isn’t and hasn’t changed much, might just end as it started — with Joe Biden winning by default.