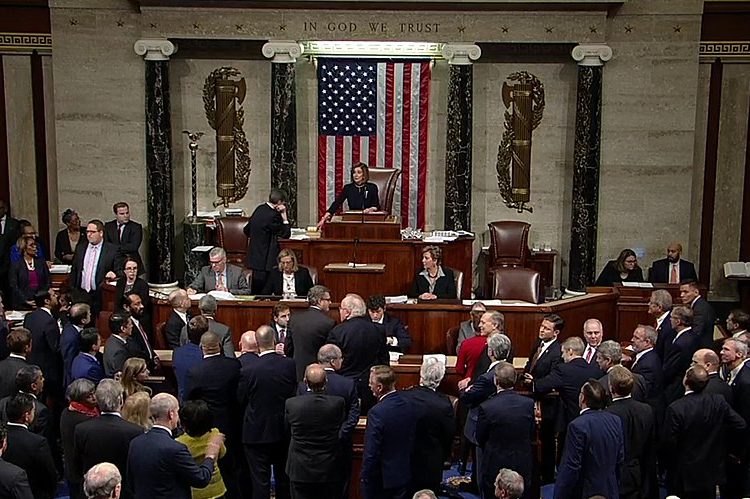 The House of Representative has impeached President Trump for abuse of power (230-197) and obstruction of Congress (229-198). Both Democrats that voted against the inquiry also voted against impeachment and one, Rep. Golden (ME), voted for Article One but objected to the second based on a technicality. Short-timing Congresswoman and fringe presidential candidate Tulsi Gabbard voted present twice.

Otherwise it was a party line vote that sets up a 2020 election season unlike anything we have seen before.

Other than the waffling Rep. Van Drew who can’t seem to make up his mind what party he will be when he faces certain electoral doom next fall, the outlines for the 2020 election are now drawn. With members holding the line either out of principle or fear of being primaried by their party, and the President being on the top of the ballot, an election on the state of politics completely dominated by President Trump is in the offing. The much discussed 31 new congress members that flipped 2016 Trump areas blue in 2018 will be running on impeachment and whatever else congress can get done in the 9 months it will have after returning from holiday break.

Then Speaker Pelosi threw a bit of a wrinkle in the festivities:

Speaker Nancy Pelosi refused to commit Wednesday to delivering articles of impeachment to the Senate, citing concerns about an unfair trial on removing President Donald Trump from office.

Senior Democratic aides said the House was “very unlikely” to take the steps necessary to send the articles to the Senate until at least early January, a delay of at least two weeks and perhaps longer.

“So far we haven’t seen anything that looks fair to us,” Pelosi told reporters at a news conference just moments after the House charged Trump with abuse of power and obstructing congressional investigations. “That would’ve been our intention, but we’ll see what happens over there.”
Story Continued Below

Pelosi’s comments, which echo suggestions raised by other Democrats throughout the day, inject new uncertainty into the impeachment timetable and send the House and Senate lurching toward a potential institutional crisis.

Though the House adopted two articles of impeachment charging Trump with abuse of power and obstruction of congressional investigations, it must pass a second resolution formally naming impeachment managers to present the case in the Senate. That second vehicle triggers the official transmission of articles to the Senate.

By delaying passage of that resolution, Pelosi and top Democrats retain control of the articles and hope to put pressure on Senate Majority Leader Mitch McConnell to adopt trial procedures they consider bipartisan.

So the Speaker, so concerned with the optics of solemnity and seriousness as to generate a soon-to-be-ubiquitous meme of her “death stare” to cut off the smattering of applause when she gaveled the impeachment articles approved, now will hold up the process. The thing that no Democrat wanted — as we were told relentlessly during the 12 hours of floor speeches — but were forced by history to do, must take a time out. The clear and present danger to our democracy that meant impeachment could not wait will have to wait until everything in the Senate is just how the House wants it.

The probable truth is much less interesting. This is the Speaker throwing feed into the political koi pond to keep folks busy with the appearance of activity over the holiday break when not much was going to be done anyway. As the House had wide Constitutional discretion to pursue impeachment, so has the Senate near-absolute leeway in how they will conduct the trial. While it is true Senate Majority leader Mitch McConnell wants this process over and done with, he has no incentive political or otherwise to indulge the pundit classes fan fiction of obscure ways to make the Senate — if not to remove the president — at least chalk up a few Rs to get the “bipartisan” label back on the impeachment side of the ledger. The probable outcome of such a power play is for Mitch to go “OK”, shrug, and go back to approving judicial appointments two and three at a time as his Senate majority has been doing for the last three years at a record pace.

So now we have an impeached president, a pending senate trial whose machinations are uncertain even if the outcome is not, and oh-by-the-way the Iowa caucuses and rest of the presidential primary is relentlessly coming towards us. It’s going to be a busy start to 2020, and a wild ending with the latest edition of “The most consequential election of our times!” come next November. At least this one, with it’s impeached and acquitted sitting president on the ballot, will be different.

One way, or another.