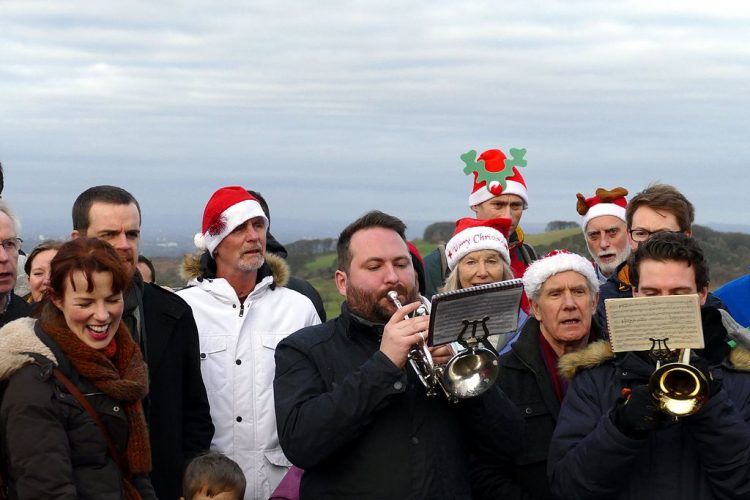 Before you break out the Bing Crosby or dust off the Michael Bublé; before you drop the needle on the Elvis or Ella Fitzgerald; hell, before you even play one bar of José Feliciano or Mariah Carey, I am going to tell you about Christmas songs by artists I love that do not get as much love as the aforementioned artists. Every year I curate a Christmas playlist on iTunes, remember iTunes?1 Anyway, I am not going to make a Spotify playlist for you people because as I have often declared here and elsewhere, Spotify is bad and dumb. I will however embed some YouTube videos. YouTube is also bad and dumb, but at least its primary function isn’t to destroy music.

10. “Bring Back My Cadillac”- Joe Bonamassa

Starting things off right with a face-melting blues jam with a Christmas feel. I did a little research to see if this song was a reinvention or inspired by Baker Knight’s “Bring My Cadillac Back,” but could find no confirmation. Anyway, this song is great, if someone took my Cadillac I’d probably write a song about it too, after calling the police.

9. “What We Do On Christmas”- Atom and His Package

Almost neurosurgeon and one-man indie pop band, Atom and His Package, (Adam Goren) released a couple of neat little albums in the late 90s and early oughts that lampooned the hardcore punk scene among other things. While not strictly a Christmas song, it does come right out and reference the “Right-wing crazy people,” which is sure to be a hit for some of the readers of this particular website. It basically describes, in a tongue-in-cheek fashion, how the Jews (Adam Goren is Jewish) have the time to run the world while everyone else is celebrating. Mostly, he describes, “we go to the movies and eat Chinese food.”

When I say non-traditional Christmas songs, I mean it. This song is basically Earle’s version of “Song to Woody,” but is a truncated prayer for Woody Guthrie to come back and help us out. Again, not strictly a “Christmas song,” but that’s the point y’all!

7. “Have Yourself a Merry Little Christmas”- My Morning Jacket

6. “Christmas Must Be Tonight”- The Band

If I had a band, I would totally ask if we could play this song at midnight mass. I am not so sure it would happen, but it is a beautiful song and belongs on everyone’s Christmas music playlist. I have to say, however, nothing replaces “Joy to the World” at the end of midnight mass.

Written for his girlfriend at the time, Parker Posey, a slow track that has a scintilla of Christmas magic in there. This is of course until the outgoing verse where Ryan proclaims that “it’s summertime.”

The second cover of a classic on this list. It is also slightly upbeat for early Conor Oberst. As I alluded to in the beginning, I try to curate my own list of songs because I get sick of hearing the same classics by the same artists over and over. This version of “Blue Christmas” is certainly a refreshing take on a solid classic.

In the same vein as Steve Earle, John Prine wrote a non-traditional Christmas song for those of us that get sick of hearing the same Bing Crosby tracks over and over. Prine is an underrated lyricist and severely underrated artists in general.

Why is this song so high on this list you ask? Because it is AWESOME, that’s why. If you try to come at me in the comments, I’m just going to post the lyrics in response. That weird little synth riff will be seared into your memory and you wont be able to escape it. Watching the music video which will make even less sense than the song and video I have for you in the #1 slot. I love this song so much that if it comes on my shuffle in the middle of June I make a point of not skipping it.

Here I present to you all the ultimate Christmas song. It has it all: polka, Dylan in a wig, presidents as reindeer, a raucous party, and Dylan’s stodgy acting that we all have come to know and love. Dylan did a whole Christmas album, but this is the only track worth making this list. It is actually a cover of a Brave Combo song, and their version is great as well!

Well, there you have it. If I glossed over any particular non-traditional favorites, leave them in the comments. Just don’t come after Sir Paul McCartney.