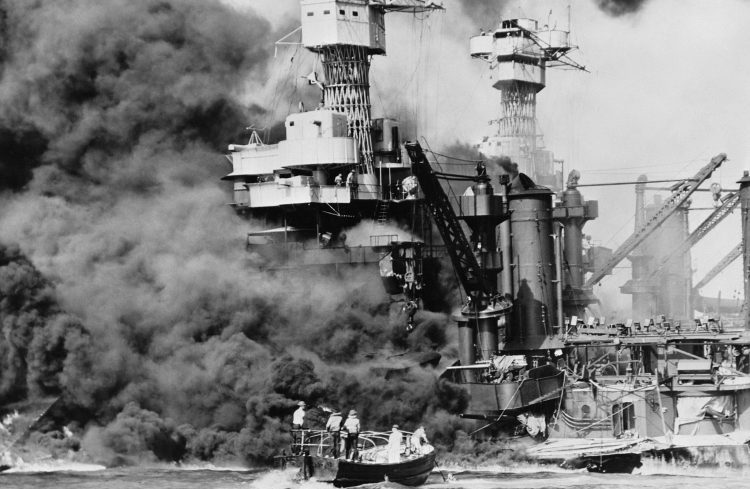 The USS West Virginia, sinking at her moorings and burning. December 7th, 1941 [US Navy, Public Domain]

Ronald Endicott, Clifford Olds and Louis Costin are three of the honored dead from the Japanese attack on Pearl Harbor on December 7th, 1941. Endicott and Costin were buried at the “Punchbowl” National Memorial Cemetery of the Pacific in Honolulu. Olds’ remains were returned to his hometown to be buried. All three headstones have “December 7th, 1941” inscribed on them, the “day that will live in infamy” as FDR declared it before Congress in asking for a declaration of war. A day that would be remembered even though these three of the 2,008 Navy personnel, 109 Marines, and 218 Army dead would seem a footnote, if they were remembered at all. Along with the 68 civilians who died, making the total dead 2,403, the fate of three men seems small, and barely worth mentioning. Almost half those numbers died on the memorialized USS Arizona alone. 106 men died on the USS West Virginia, with another 25 unaccounted for and presumed dead, including Endicott, Olds, and Costin.

Except they didn’t die on December 7th.

The USS West Virginia took six or seven torpedos, multiple bombs, and burned for over 30 hours. Her Captain, Mervyn Bennion, was all but disemboweled when a bomb exploded the command deck while directing the defense of his ship. Continuing to command while holding his own wound closed, and refusing aid as he lay dying, he was one of 15 Medal of Honor recipients from that day, like most of them, posthumously. Dorie Miller, who attended him among many others that day, and later took to the ship’s anti-aircraft defenses, would become the first African-American recipient of the Navy Cross for his actions.

But far below the superstructure of the ship, another drama was playing out. With all the torpedo hits on one side of the ship, quick thinking damage control officers led the effort to counter-flood the ship, purposefully sinking West Virginia at her moorings, but preventing her from capsizing. West Virginia settled in the relatively shallow water of Pearl Harbor with her superstructure still able to fight both the Japanese and the raging fires, giving her crew a chance to escape, and preserving the hope the ship could later be salvaged. 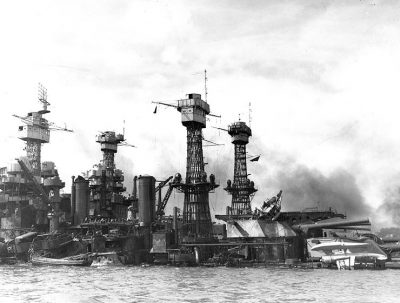 The problem for the three men at their battle station in the fresh water pump room far below decks, was that they were now trapped.

Salvage crews swarmed the battered fleet, and indeed most of the ships were returned to some manner of duty. The USS West Virginia would be raised six months later, repaired first at Pearl Harbor before being rebuilt stateside, and return to the war in July of 1944. At Surigao Strait she lead the line, including other Pearl Harbor veterans, in the utter destruction of the Japanese “Southern Force” in the last action between battleships fighting in a formal line in history. Her modern fire control, byproduct of her long rebuild after being sunk by the Japanese, let her rain fire on the enemy before they could even range the American ships. The West Virginia would serve the remainder of the war to great honor, glory, and commendation.

But it was an obscure piece of paper, remnant of that darker day in 1941 when she sank, that the Navy not only didn’t publicized, but hid from the public and the families of those three men for nearly half a century.

When salvage crews finally got to storeroom A-111 and recovered the 3 bodies, they found it relatively dry, flashlight batteries and rations strewn across it, an access hatch to the adjacent fresh water tanks opened, and other evidence of just how long the men had survived in the dark. Most horrifying was the wall calendar. A red X was still marked off from December 7th until the last marking: December 23rd. While many observed their advent calendars, the three men must surely have known they were recording their own hopelessness, yet maintaining their humanity as best they could while fighting to survive anyway. At least one of them almost made it to Christmas. Sixteen days in the dark, waiting for help that was still 6 months away from coming.

Historical events loom large, and things like Pearl Harbor draw attention, pivotal events that are inflection points to all of human history. Which makes it all the more important when we find human moments, like three young men who will forever be on the rolls of the dead from that day of infamy but whose story goes beyond that, to think of them as well. To take a moment and remember people otherwise forgotten. Remember that any quiet Sunday morning might bring about not only changes – or even the end – of our own lives, but the changing of the course of history by events we can be swept up in.

Along with all the others who suffered that day, and the millions who died in the ensuing conflict, we should remember Ronald Endicott, Clifford Olds and Louis Costin on this day of reflection, three men who deserve to have their footnote to history known, and honored, and remembered.