Not the Bi-Partisan Impeachment They Were Looking For 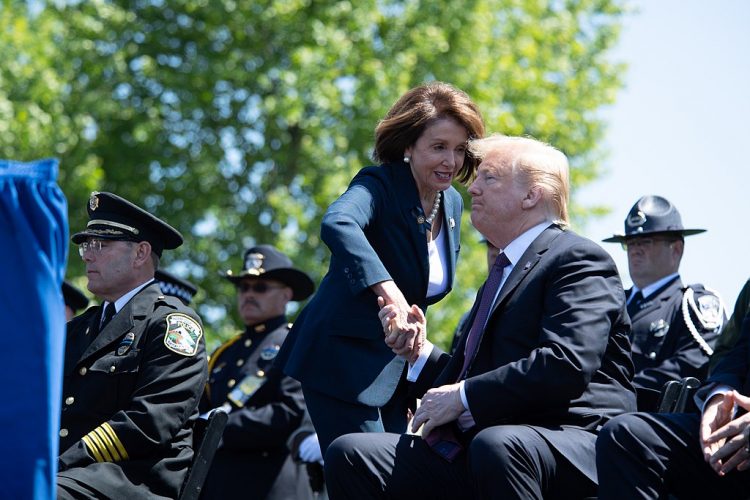 When the House of Representatives took their formal vote on the impeachment inquiry, two Democrats voted against it. With Speaker Nancy Pelosi’s announcement that Articles of Impeachment are forthcoming, it does not appear either of her dissenters have changed their minds:

He warned Democrats to “be careful what you wish for” and he added that impeachment “is tearing the nation apart… And I want to bring people together.”

Van Drew, whose district voted for Trump in 2016, said he would have preferred a censure vote on Trump so they could “move on.” Van Drew was first elected in 2018, winning a seat that was previously GOP controlled.

Minnesota Rep. Collin Peterson, the other Democrat who also opposed the inquiry, was also asked if he’d vote to impeach.

“I don’t have an idea what they’re doing,” Peterson said.

The passage of the Articles of Impeachment out of the House appears to be a foregone conclusion. For all practical purposes that was decided when the Democratic Party picked up 41 seats in the last midterm election. With all the non-stop commentary and think pieces whispering about which, if any, Republicans might defect from the president’s side, relatively little attention has been paid to the two Democrats that are yet to get with the program of their caucus. But it’s hard to blame them when their own leader has, at best, been dragged along on the journey to impeaching President Donald J. Trump.

“I’m not for impeachment,” Speaker Pelosi herself had said back in March. “I haven’t said this to any press person before. But since you asked, and I’ve been thinking about this, impeachment is so divisive to the country that unless there’s something so compelling and overwhelming and bipartisan, I don’t think we should go down that path because it divides the country. And he’s just not worth it.”

That is getting ready to change. And the divides are not just going to be in the country, but her own caucus that represents it.

Progressive ire toward Trump puts many House Democrats in a political bind. Polls increasingly show that swing states and districts oppose removing Trump from office. Indeed, a recent Marquette Law School poll found that Wisconsin voters, who backed Trump in 2016 with a margin smaller than one percentage point, oppose removing him from office by a whopping 13 points. Even the Democratic Congressional Campaign Committee found that opening the impeachment inquiry was favored with only a one-percentage-point margin — 49 to 48 — among voters in 57 “battleground districts.”

The DCCC poll hides even worse news for members such as Van Drew. Since polls show the inquiry is more popular than removal from office, it stands to reason that battleground district voters likely opposed removal in the DCCC poll. Furthermore, those tiny margins of support for impeachment is bad news for the Democrat’s majority. In 2018, Democrats gained 22 seats that Hillary Clinton had carried in 2016. Given that such Democratic-leaning seats were clearly included in the 57-seat sample and that support for the inquiry and removal breaks sharply on partisan lines, it’s reasonable to assume that support for impeachment is behind in other Republican-leaning seats, such as Van Drew’s.

That is a huge potential problem for House Democrats, who currently hold 31 seats Trump carried in 2016. With passions over impeachment running so high and opinions sharply split on partisan grounds, voting for the inquiry was an incredibly risky vote for any Democrat representing one of these seats. Despite that, only Minnesota’s Collin Peterson — who represents the most Republican district in the country held by a Democrat — joined Van Drew in opposing the inquiry. Republicans need only 17 of these seats to win back the House.

With the vote in the Senate to remove President Trump from office doomed to fail, and House Democrats now committed to impeaching the president, the math and strategy starts to get very interesting. Unlike most of the Senate, every House member will stand in the dock in 2020, and unlike 2018 when the rhetoric was that of a referendum on President Trump, the man himself will be at the top of the ballot. The 31 seats that flipped from 2016 Trump to 2018 Blue Wave Democrat will be skirmish lines not only in gauging the mood of the country regarding impeachment, but previewing the 2020 contest as well.

Speaker Pelosi knows all this. While she is not afraid to sacrifice for the cause, one does have to wonder how this is gaming out in her own mind. She knowingly and openly sacrificed her last majority to pass the Affordable Care Act as then-President Barack Obama’s signature legislative program. Many of the same districts we are talking here saw members who rode President Obama’s coattails into congress in 2008 wash right back out in the cyclical midterm change-over that had the added fuel of contentious legislation on top of it. But Obamacare did pass, and the Speaker knows impeachment is not going to. This likely being her last go round with the gavel, it is fair to ask if some of the speed she is proceeding with here is not an attempt to get the “L” out of the way so there is time to make a few new headlines before November voting in 2020.

Such duality of thought was evident in the Speakers Q & A session yesterday. The contentious exchange with a reporter and rare flash of anger from the Speaker took the headlines, but the rest of her remarks were notable as well. While she continued her insistence that the impeachment inquiry was necessary and a matter of principle not politics, she also talks of getting it done now so they can get on with other legislating afterwards. It’s a small thing, probably mostly unnoticed, but it is telling that while she frames impeachment as congress stopping a great threat to our democracy she already has plans to continue practicing said democracy after the endeavor fails.

To do so she needs her majority of Democratic members. With two rebels already set to go against the plan, the question becomes how many of those swing district Democrats will look to seek the cover a relatively comfortable majority could offer. On most contentious votes, the savvy legislator Pelosi picks the members that can be excused for voting their district over the party line and thus protecting their seats. With a base that has been promised impeachment for the better part of the last 3 years, any such move is going to draw much attention and probably primary challenges.

Then there is the math. With two already in the “no” camp, that legislative lifeboat has only half as many seats as the 31 members who might be weighing their options. Who goes, who stays, and who gets voluntold which by Speaker Pelosi and the other powers that be bears watching as the process moves forward. While polling nationally keeps impeachment around the 50/50 mark, those swing districts are below those numbers for the most part.

For Nancy Pelosi and her historic freshman class, the time for strategy is rapidly ending and a point of decision is coming. The talk of impeachment, of history, of responsibility, of duty, of a hundred other sound bite worthy things is almost at an end, and now the commitment must be made. The old saying of everyone wants to change things till it’s nut-cutting time can be modulated to every opponent of the president wants impeachment until it might cost them something other than social media feedback, and guest slots on the talking head shows, and those nice fat fundraising checks from people who want to see it happen. If more than just the two already voting no Team Blue members look for the shade of the majority from the arrows of a not-as-popular-as-they-were-led-to-believe impeachment vote, the bi-partisan impeachment might just occur after all, just not in the way they intended.

Let us see who wants to pay what price for what they believe now, and judge accordingly going forward.