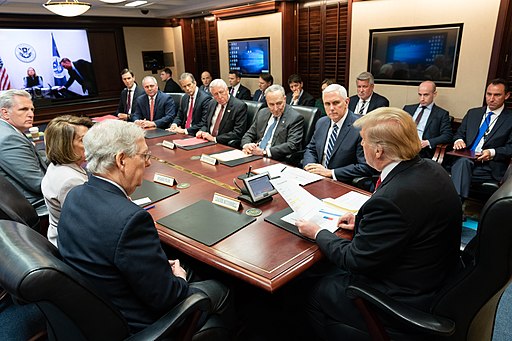 Former Republican congressman Charlie Dent said Thursday some of his former colleagues in the House of Representatives have privately told him they are “absolutely disgusted and exhausted by the President’s behavior.”

Dent told CNN’s Ana Cabrera on “Newsroom” that House Republicans are standing with the President at the moment because of base pressure, but said “they resent being put in this position all the time.”

There’s something familiar about all this. Wait, I know, it’s from back in June:

President Donald Trump’s allies have been privately critical after he told ABC News he’d consider accepting incriminating information about an opponent from a foreign government without calling the FBI, according to multiple sources.

Those who regularly defend the President and some who have worked in senior roles in his West Wing were incredulous Wednesday, cringing at the President’s remarks.
“It’s really bad. It’s really, really bad. He shouldn’t say it, and if he were to do it, it would be impeachable. If a President took information from a foreign government that would be impeachable,” a senior Republican source told CNN’s Jamie Gangel.

No, wait, that’s not it. Ah, maybe this from January:

Right now, reporting abounds of Republican senators and representatives privately expressing their ire at the president. Even as some questioned the motive or timing Mitt Romney’s diatribe against Trump’s character and performance in office, off the record it was widely acknowledged that everything Romney said was true.

No, no. I’ll get there. How about this from a year ago?

Outgoing Sen. Claire McCaskill (D-Mo.) did not hold back when giving a scathing assessment of the Republican Party and President Trump, saying GOP senators privately say Trump is “nuts.”

“Now they’ll tell you, if it’s just the two of you, ‘The guy is nuts, he doesn’t have a grasp of the issues, he’s making rash decisions, he’s not listening to people who know the subject matter,’ ” she told CNN. “But in public if they go after him … they know they get a primary [challenger], and they know that’s tough.”

[Jacob Wohl] has been the subject of a viral Twitter meme mocking Wohl’s repeated claims of visiting “hipster coffee shops” around Los Angelesand overhearing conversations in which anonymous customers are discussing their support of Trump or opposition to his enemies.

I just left a hipster coffee shop in downtown LA. There was a group of young Democrats murmuring to each other that they know the “Suspicious Packages” were an inside job to make Republicans look bad — Jacob Wohl (@JacobAWohl) October 24, 2018

I just left a hipster coffee shop in the Fairfax District, here in Los Angeles. I can tell you one thing: Jewish support for President Trump is higher than ever! — Jacob Wohl (@JacobAWohl) October 27, 2018

I just a left a hipster coffee shop. It was packed with liberals, whispering amongst each other about what a commendable job President Trump did with Vladimir Putin this morning in Helsinki — America is PROUD! 🇺🇸 — Jacob Wohl (@JacobAWohl) July 16, 2018

I was in a hipster coffee shop (safe space) here in LA and the libs were whispering to each other how @realDonaldTrump is doing great for the economy, got them a raise at work and will definitely be re-elected in 2020 — Jacob Wohl (@JacobAWohl) January 13, 2018

Even coffee-shop-hipster liberals are in awe at President Trump’s diplomatic breakthroughs all around the world — Jacob Wohl (@JacobAWohl) May 10, 2018

It’s kind of amazing when you think about it. When Jacob Wohl used to tweet (from his now defunct account) about hipster coffee shops filled with secret Trump supporters, it was immediately and rightfully recognized as humbug. And yet, we’ve now had approximately 18 million of these “Republicans are secretly disgusted with Trump” stories that are just as diaphanous, just as unsubstantiated, and yet are taken seriously.

I guess it’s understandable. Those of us who dislike Trump want to believe that there is some secret cabal of Republicans who privately oppose him but publicly support him out of fear. The theoretical existence of said cabal would be a safeguard against Trump doing something really crazy. Indeed, this fantasy is supposedly a hard reality, if we are to believe the self-involved naval-gazings of Anonymous.

But, it really goes a bit deeper than that. I’ve occasionally made reference to the Inside the Beltway crowd’s fascination with itself. There is nothing more fascinating to our Washington media than Washington gossip about Washington people doing Washington stuff in Washington. And nothing could be more illustrative of this News Ouroboros than the continual insistence that there is a shadowy faceless mass of Republicans who secretly disapprove of the President and are just aching to turn on him with an ache that would make a harlequin romance novel heroine’s ache for love pale by comparison.

The trouble is, when you read this turgid prose with a skeptical eye, it reads less like a harlequin, which can be enjoyable on its own merits, and more like dumb teenagers gossiping in Study Hall on a rainy Monday morning.

“Do you want some tea? Lindsey is totally unhappy with the way we treated the Kurds.”

No, I take that back. And I apologize unreservedly to the teenage gossips of the world. At least if teenagers are gossiping about who fooled around in the utility closet last weekend, someone cares. But the Washington gossip game is just that: a game. In this case, either a game the media are playing to convince themselves that Trump’s support will collapse any day now. Or a game the GOP is playing to try to persuade their Never Trump friends to support them. None of it is real. No one actually fooled around in the closet.

It comes to this: I will not believe that the GOP is tired of Trump until they say so … publicly. Until that moment, they own this mess. All of it. Every corruption, every racist utterance, every violation of norms. Every dollar of debt, every pardoned war criminal, every dead Kurd. Gossiping off the record to the Washington Post that you secretly, like, totally disapprove of this means less than nothing. It doesn’t make the debt one dollar smaller or bring one dead Kurd back to life.

There may come a day when the GOP is held to account for this disaster of a Presidency — either after 2020 or (more likely) after 2024. I wouldn’t bet too much on it, since political memory spans are short. But if it comes, I’m not going to forgive the Republicans because when they claim they were never really a supporter of Trump, that they were actually against him and they said as much to CNN. No matter what the mass movement is or how repulsive it is, everyone claims, post-facto, to not have been a part of it. But unless you publicly oppose it, you are are a part of it. For better or for worse.