Back in early 2018, I picked up Zachtronics’ “Opus Magnum” at the annual Steam Holiday Sale. A fun game about programming and alchemy. The game started off with some simple “turning lead into gold” and I stalled out somewhere around “Unstable Compound”. The fun part was that a rudimentary knowledge of alchemy was not required to enjoy the game. You just enjoyed (or ripped your hair out) writing a program that could take the various essences and turn them into the goal. And then, after you were done, the game told you how you did compared to other folks. “Congrats on completing the puzzle! You are dumber than 80% of the other people who played this game.”

Well, they’ve got a chemistry game. This one is actually based, kinda, in reality. Kinda. How do you do this? Well, you’re given a machine that can take a molecule and add or remove a hydrogen atom to it. It can also manipulate the atoms you’re working on by turning them or pushing/pulling them (or discarding an unwanted non-hydrogen atom/molecule) and that will allow you to make even more complex molecules… but the first thing you do (the tutorial level) is turning water molecules into hydrogen peroxide molecules.

Those of you who remember your high school chemistry remember that H2O isn’t really the best way to talk about water. It’s more accurate to imagine it as H-OH. (and, really, there’s an angle so it’s more like two of the four points of a tetrahedron… well, the electron shell exerts a force as well so the angle isn’t exactly 109.5° but closer to 104.5°… but you get the gist). So if you have a machine that can remove hydrogen atoms, it’s as simple as putting two water molecules next to each other and removing one hydrogen from each molecule, right? Here’s my solution:

The current puzzle I’m working is to make amphetamine. Here’s the precursors that you have access to: 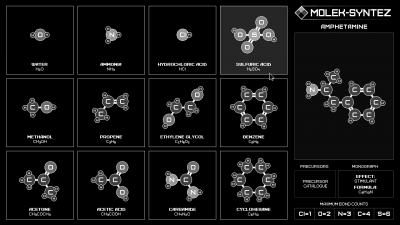 Look at the thing you have to make and then look at the precursors you have available. See? They’re right there. Line them up on the board as appropriate, remove the hydrogen atoms and voilà. Meth.

You’ll eventually get to make stuff like Aspirin and Pyrazinamide and Ketamine and, well, now that I think about it, this game is kinda creepy.

The graphics are pretty minimalist (like you’d expect to see in a bare-bones chemistry tutorial) but the graphics aren’t why you’re here. You’re here to demonstrate that you can wrap your head around problems involving rotating patterns in your head and dealing with order of operations issues. And, yeah, vaguely remember some of the stuff you’ve forgotten from high school chemistry.

(Featured image is “A young boy wearing a dunce cap in class, from a staged photo c. 1906” and is in the public domain.)