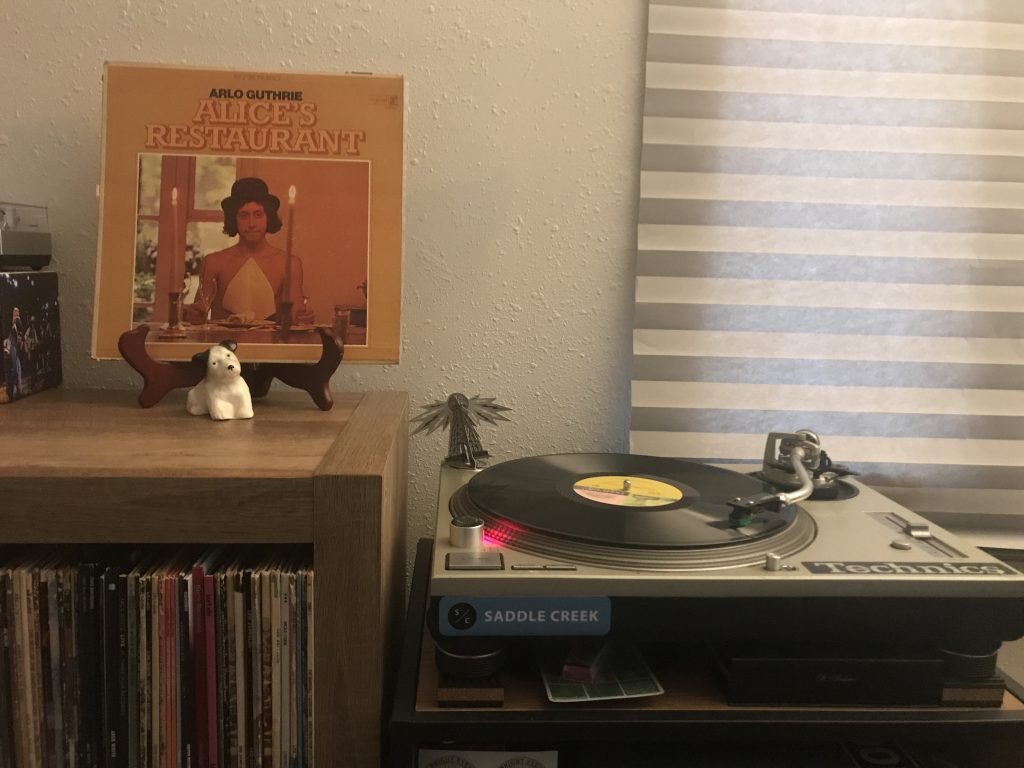 Today we have a special spin about littering with an anti-war message that will for sure irk some people. Have you ever flipped on the radio during Thanksgiving, only to find that your local station is playing an 18-minute song about a restaurant, twenty-seven 8 x 10 colored glossy photographs, and a “Massacree?” If not, then your local radio station has been doing you a great disservice.

This particular record has almost nothing to do with Thanksgiving other than the holiday being mentioned in the song itself, but since its release it has become a unique Thanksgiving tradition. 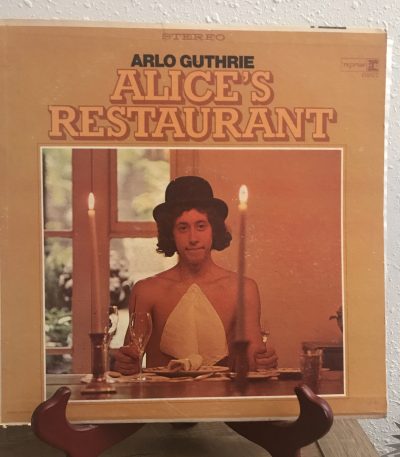 First of all, Alice is a real person and so was her restaurant. This whole song was inspired by a real event in Guthrie’s life wherein he actually illegally dumped garbage for Alice on Thanksgiving day and was actually arrested and charged for doing so. What follows is an epic1 talking blues song which became a Thanksgiving tradition here in the United States. The LP itself has a whole other side with six tracks.

Due to the length and amount of stuff to unpack, this post will be focusing only on the title track.

Arlo Guthrie is of course the son of legendary folk singer, Woody Guthrie. While not reaching the same level of fame as his father, Arlo has released some great tracks throughout the years and still performs regularly.

The first part of the song establishes that song is about Alice and her restaurant. The name of the restaurant was not “Alice’s Restaurant,” wikipedia tells me that it was called “The Back Room.” However, since the song was supposed to be about Alice initially, Arlo decided to ease into the littering story with a bit of a story as to why the littering occurred. You see, Alice and her husband apparently had piles of garbage in an old converted church they resided in, so Arlo and his friend decided to do them a favor and take it to the dump. The chorus is born, “”You can get anything you want at Alice’s restaurant.”

“So we took the half-a-ton of garbage, put it in the back of a red VW
Microbus, took shovels and rakes and implements of destruction, and headed
On toward the city dump. Well, we got there and there was a big sign and a
Chain across the dump sayin’, “this dump is closed on Thanksgiving, ” and
We’d never heard of a dump closed on Thanksgiving before, and with tears in
Our eyes, we drove off into the sunset lookin’ for another place to put the garbage.”

Well the city dump was closed so Arlo and his friend decided to take the garbage to another site. Yuge mistake! They dumped the garbage off the side of a road down a hill went back to Alice’s and had a “Thanksgiving dinner that couldn’t be beat.”

According to the song, and I’ll remind you that it is a satire, an officer2 contacted them because an envelope was found in the garbage that led the police to believe that they, Arlo and his friend, dumped the garbage. Long story short, they are arrested and Obie actually hauls them in front of a judge. A blind judge with a seeing eye dog.

I should back up here and mention that the police force in this little town consisted of “two police officers and one car,” but at the scene of the crime, Arlo describes more cops and “cop” equipment which is where the “twenty-seven 8 x 10 colored glossy photographs” come into play. Back to the courtroom:

The veracity of this story cannot be verified, but the song is satirical. The real punishment was a $50 fine and an order to pick up the garbage, which they did. They then went back to Alice’s Restaurant and had a “Thanksgiving dinner that couldn’t be beat.”

Part 2: The Draft (Or the Real Reason Arlo Wrote This Song)

Here’s where the song presents a very topical issue. It explores the mental states of soldiers as well as exaggerating the bloodthirstiness of soldiers volunteering and/or being drafted into service during the extremely unpopular Vietnam War. The song describes how Arlo visited the Army building on Whitehall Street in New York to “get injected, inspected, detected, infected, neglected and selected!” In an over-the -top fashion he describes getting drunk the night before and acting like a homicidal maniac in order to be found unfit.

This song was written a full year before the My Lai massacre too. It really shows the divisions that existed at that time over the conflict in Vietnam. Anyway, the second part ends with Arlo being required to describe his arrest for littering and his subsequent trial. This affords him to take another shot at the army (remember this is 1967):

“I filled out the Massacree with the four-part harmony. Wrote it down there
Just like it was and everything was fine. And I put down my pencil, and I
Turned over the piece of paper, and there on the other side in
The middle of the other side away from everything else on the other
Side in parentheses capital letters quotated read
The following words “kid, have you rehabilitated yourself?”
I went over to the sergeant. Said, “Sergeant, you got a lot of god-damned
Gall to ask me if I’ve rehabilitated myself! I mean I mean I
Mean that you send I’m sittin’ here on the bench I mean I’m
Sittin’ here on the Group W bench, ’cause you want to know if I’m moral
Enough to join the army, burn women, kids, houses and villages after bein’ a
Litterbug”
He looked at me and said, “kid, we don’t like your kind! We’re gonna send
Your fingerprints off to Washington”!”

Part 3: A Call to Action

Believe it or not this will not be the first time this week where I talk about a song using the word “faggot.” In both instances people were understandably up in arms, but when you study the use in this song and on a song we will be covering on Saturday,3 you will see that it is used from the perspective of someone that would actually use that slur, not because the artist would regularly use that slur.4

Arlo’s call to action is to convince others, during the draft, to walk into the shrink’s office and simply say, “Shrink, you can get anything you want at Alice’s Restaurant.” He then goes on to say that one person might do it and they would think he is crazy,  “And if two people do it, in harmony, they may think they’re both faggots and they won’t take either of them.” This of course harkens back to homosexuals not being able to serve openly. Something that was not formally changed until 2012.

The song was made into a movie in 1969, starring Guthrie as himself. Also, a “Massacree” is a nice way of saying something is FUBAR. It doesn’t exactly refer to an actual massacre, which Guthrie describes his character being in favor of (satirically) in the song in order to be found unfit for service.

The song is 18 minutes long, and you should definitely check it out for yourself, I am hoping you hear it on the radio Thanksgiving day.