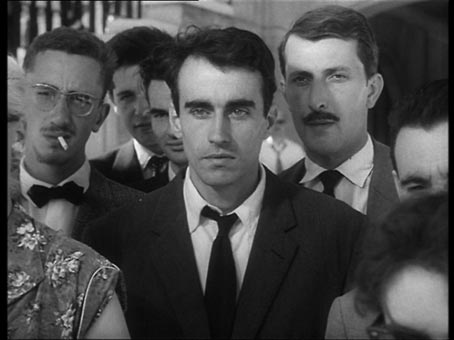 I love a good twist ending; it’s something hard to pull off in fiction without it coming across as corny or unbelievable. And yet, the Western tradition is rooted in the Scriptures, which are themselves full of stories with a special type of “twist ending”, as grace is continually extended to those who logically shouldn’t receive it- indeed, the illogic is the point of the miraculous. This is in stark contrast with the structure of tragedy, where a character’s fate is adhered to and inescapable, for the most part, but turns out even worse. The Scriptures must have seemed a relief.

This week, I dug further into Robert Bresson by rewatching “Pickpocket”, a movie I loved years ago and still loved this time around, but for different reasons. I think I realized when I first saw it that the ending is a “twist”, although it’s also a depiction of the miraculous. What I noticed this time is just how much the entire film allows the viewer to build their own expectations without actually guiding them in any way, and then subverts everything we thought we knew about the characters, the story, and human reality in general. It’s an incredible ending, but, as they say, Spoilers Follow.

Bresson had the idea for a movie about a pickpocket after watching Sam Fuller’s Pickup on South Street. Some critics have expressed surprise by this influence because Bresson is seen as a religious ascetic filmmaker and Fuller is associated with lurid b-movies- Pickup is a classic noir. But Fuller was a great director whose ideas can be spotted in movies by directors like Scorsese and Spielberg as well. When Fuller made his film, which also features a pickpocket, he called in an actual pickpocket as an advisor and, during the interview asked the man what qualified him to serve as an advisor. The pickpocket then revealed he had already stolen Fuller’s wallet.

In Pickpocket, we spend a great amount of time watching the small-time Pari thief Michel stealing from people and his actions are so well-rehearsed it seems like his hands are acting of their own accord. I was reminded of drummer friends who are always beating out a rhythm without even noticing. I recently wrote: “With Bresson’s films, we get the chance to see what it’s like for someone else to be themselves, in the most direct and generally incommunicable way, which makes them miraculous.” Michel is as obsessed, in his own way, as the country priest, and he treats is as almost a religious calling, convinced of the supposed superiority of the thief. We realize that he could do anything else to earn money, if he so chose. We also come to recognize how this obsession places a disconnect between Michel and the world around him. He seems as isolated as the Priest.

He’s not completely isolated, of course. He has a friend, who shows some concern, and the friend’s girlfriend is taking care of his dying mother, who once protected him from the law. There is also a police officer who is either trying to help him or help to catch him. But, throughout, Michel seems affectless and dazed.

Paul Schrader, who wrote Taxi Driver as well as a key book on Bresson, notes the “disparity” in Bresson’s films: between the flat everyday events he depicts and an “unnatural… human density” that develops nonetheless. We can’t help feeling that there’s something going on beneath the surface of this man, that will erupt in some dramatic climax… which Bresson keeps denying us. Again and again, we expect Michel’s friend or Jeanne to confront him and there to be a big blowout. When it doesn’t happen, tension builds. And, somehow, in spite of my having seen the movie before, I expected this time it would end with Michel being guillotined and damned. But it doesn’t.

What I noticed this time is how much Bresson subverts movie conventions simply by skipping them altogether. Bresson hated all of the contrivances of dramatic plotting and, instead, made movies that seem like fly-on-the-wall documentaries. Schrader writes that his “use of the everyday is not derived from a concern for “real life,” but from opposition to the contrived, dramatic events which pass for real life in movies. These emotional constructs- plot, acting, camerawork, editing, music- are “screens”.” Bresson calls “screens” those things that “interpose themselves” between the viewer and reality. With Pickpocket, the viewer will naturally impose their own order on the film- seeing it as a thriller with a doomed protagonist. All of this tension must be leading somewhere, or it’s just our own projection.

And it’s perfectly understandable that we’re tense. The scenes are cut so that shots linger a bit too long, Michel reveals almost no feeling- even when his mother dies, Bresson gives little idea of the character’s inner life. And there aren’t many musical cues, until the end. Bresson’s later films had none at all.  Bresson also avoided using professional actors in his movies, and the performers he used in one film, he never used again. He felt that “acting is for theatre. It is a bastard art.” He trained his performers to carry out their behaviors as “automatically” as possible. This has the effect of making them seem like they’re sleepwalking through life.

And the, with the ending, suddenly Michel transcends all of this! I take it we’ve had sufficient warning… In the very last scene, when Michel is finally incarcerated, he also transcends himself by embracing Jeanne in the prison cell, realizing she genuinely loves him, and is thus saved, ending with the line “Oh, Jeanne, what a strange route I had to take to come to you”… well, it’s absolutely convincingly triumphant. He is imprisoned, but he’s also freed, surrendering to belief and grace. This scene could have played as corny or unearned. It does not.

So, this viewing was the first time I realized that nearly the entire film plays as a thriller about a lonely criminal’s downfall and damnation until the very last few minutes, when it suddenly reveals itself as a love story about his salvation. It’s a great film! I look forward to watching it again.