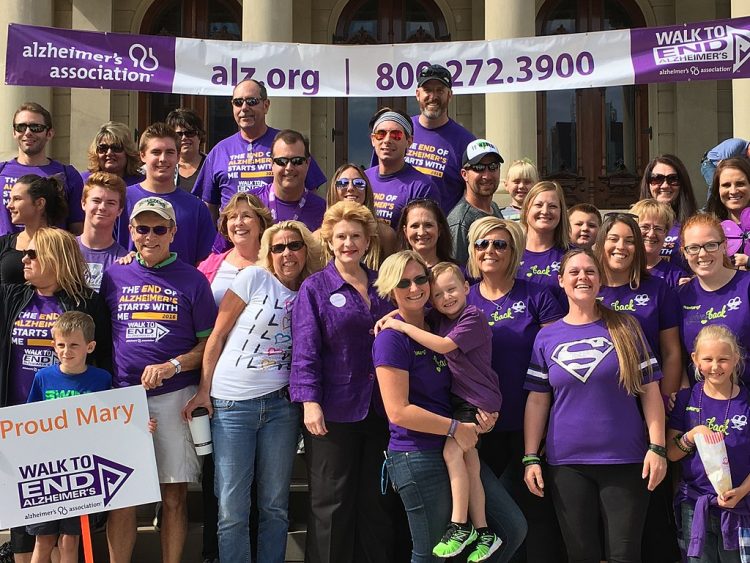 Walk to End Alzheimers in Lansing, MI in 2016. Photo from the office of Senator Stabenow [Public domain]

“I’m sorry, we don’t have any current disease-modifying treatments to stop this disease from progressing.”

It’s the most frustrating and most motivating part of my job.

As an academic neurologist who specializes in Alzheimer’s disease diagnosis and research, I wear many hats during my day job. I diagnose and care for patients with Alzheimer’s disease, I teach medical trainees about it, and I try to further research by running clinical trials and writing scientific articles. By all measures, it is a wretched disease that starts by robbing our loved ones from storing new memories and finishes by transforming them into a shell of their former selves. After my day job, my line of work also means I come across many articles sent from family, friends, and colleagues hoping that the latest news headline has moved the skeptical spectacles from my face. The frustration of numerous failed trials and no known cure leaves a void that is understandably filled with a concoction of virtuous hope and villainous snake oil salesmen.

An Ordinary Times friend sparked my interest by sharing a post on Twitter linking to this article claiming a major breakthrough in Alzheimer’s treatment. A colleague and friend then linked this 9-minute video from PBS. This is the beauty of modern twitter: where one can engage with experts from a diverse landscape of specialties with a simple @ sign. This video offers illuminating visuals for the complex disease and the potential ultrasound-based intervention I will discuss below. Even more importantly, we get to meet the amazing woman behind the feature of this story.

Her name is Judi Polak, and she was diagnosed with young-onset Alzheimer’s disease (arbitrarily defined as age < 65). She exemplifies a model patient for all of us to strive for. She is physically active, determined, and curious. A former nurse, she remains socially connected by volunteering her time rocking neonates in the neonatal ICU when their parents must be away. She is willing to leap into the unknown: letting physicians send high-frequency ultrasound waves into her brain, with hopes to 1) break up some of the clumping proteins that are implicated in Alzheimer’s disease and 2) temporarily disrupt the blood-brain barrier.

The blood-brain barrier is like an eager bouncer outside a VIP club protecting against hooligans stumbling through the bloodstream. Unfortunately, many drugs we want to give patients with Alzheimer’s disease are also not on the VIP list and cannot offer their patronage to support the establishment. The high-frequency ultrasound described in the article temporarily distracts the bouncer, letting more of the drug sneak into the exclusive brain club. The bouncer restores order within 24 hours so the brain is not continually exposed to the body’s riffraff.

This is surely important work, and it has a chance to further drug trials that had previous limitations in access to the brain. The video then goes a step further and suggests that the ultrasound treatment may be responsible for clearing some of the amyloid plaque in Mrs. Polak’s brain, perhaps by activating the immune system or another mechanism altogether. This clearance has also been shown to improve symptoms in mouse models after treatments, but the PBS video does a good job of keeping their skeptical spectacles on when they point out that we have treated Alzheimer’s in mice 100x over without any of these translating to humans.

Why so many failures?

Like other neurodegenerative diseases, Alzheimer’s disease is very complex, and our current mouse models are crude biological representations. Our understanding of the disease has traditionally come from neuropathologic data after a person dies, and an autopsy is performed (shameless plug to donate your brains to science folks). Per our medical textbooks, the neuropathologic hallmarks of Alzheimer’s disease include misfolded proteins of beta-amyloid plaques, found primarily on the outside of neurons (brain cells), and tau neurofibrillary tangles, found on the inside of neurons. Many of the genes associated with Alzheimer’s disease are directly related to amyloid protein processing and clearance. With this knowledge, we spent the last 20 years of research developing ways to clear these amyloid plaques from the brain in patients with Alzheimer’s symptoms, hoping we could reverse cognitive symptoms if we simply cleaned up the trash in the neighborhood. After billions of dollars and over 15 amyloid targeting trial failures later, one needs to question whether the amyloid failure hypothesis has any axons left to stand on.

With the advent of amyloid and tau positron emission tomography (PET) imaging, we can now visualize these problematic proteins in a living brain, and we can track the changes with longitudinal studies. This technology has given us a clearer picture of the timeline behind Alzheimer’s disease. Surprisingly, we can see amyloid plaques in the brain over a decade before someone comes into my memory clinic with cognitive symptoms. The amyloid plaque phase appears to plateau before patients get symptoms, and clearance of the protein at this stage may be too late. There are a few trials starting this year and next year to see if we can clear these amyloid plaques much earlier in asymptomatic individuals, trying to halt the next phases of the disease. Think of it as colon screening catching and clearing a worrying polyp before it becomes villainous, but multiply the complexity by about 100 trillion fluctuating neuronal connections.

Is the amyloid hypothesis wrong?

Critics of the amyloid hypothesis point out that we don’t know if amyloid plaques outside neurons are responsible for the disease or if they are simply smoke and ashes from a metabolic fire raging within the neuron. We are all developing these abnormally folded proteins on a daily basis. Each time your neuron communicates with another neuron the amyloid precursor protein is active, and because protein folding is a complex process, a good percentage of these proteins are going to misfold. Our cells have chaperone proteins that try to stabilize misfolded proteins and help them fold back properly. They are like school counselors trying to prevent misguided proteins from disrupting the learning environment for the other children. There are also ubiquitin proteins, lysosomes, endosomes, mitochondria, and scores more cellular systems that act like cellular janitors going around tagging, breaking down, and recycling the misfolded proteins that could not be saved by the counselors.

This neuronal regulating system, while robust, takes a lot of energy. It makes sense that aging, a process that ultimately results in cellular failure, would be the biggest risk factor for developing neurodegenerative diseases. Whether there is increased production of misfolded proteins, decreased clearance, or more likely a combination of both, something tips that cellular balance, and the misfolded proteins start to accumulate and disrupt the learning environment for the other protein pupils. There is growing evidence that these misfolded proteins have true peer pressure effects and “protein templating” may persuade normally folded tau protein to become misfolded in the presence of other trouble makers. This may lead to the progression of the disease, based on some theories in the field. We have also learned that malfunctioning tau is the protein that tracks better with symptom onset, symptom severity, and symptom progression in Alzheimer’s disease. We now have trials starting to target pathological tau protein, with a few more tau trial failures to add to our portfolio.

An ounce of prevention is worth a pound of cure

The mitochondrial failure or metabolic failure theory looks better with each failed amyloid and tau trial, and evidence points further towards preventing rather than reacting to Alzheimer’s disease. I tell each one of my patients worried about their chances of getting Alzheimer’s disease that if I could give them one pill it would be a lifestyle pill. This magical pill would involve roughly 150 minutes of moderate to intense cardiovascular exercise per week to help sprinkle fertilizer (brain-derived neurotrophic factor) on aging neurons. It would involve a healthy portion of the Mediterranean or MIND diet, 7-8 hours of restorative sleep, and a diverse cognitive experience filled with life-long learning, novelty, and staying socially engaged. These are all elements that Mrs. Polak exemplifies in the PBS piece.

Amazing researchers, like the WVU Rockefeller Neuroscience team caring for Mrs. Polak, will continue to work on breakthroughs in Alzheimer’s disease, and I am hopeful that one of these emails from my friends and family will be the one to truly remove my skeptical spectacles. In the meantime, my advice is to follow Mrs. Polak: get involved in research and actively stockpile lifestyle pills.

I am a father, a husband, a neurologist who specializes in Alzheimer's and other neurodegenerative diseases, a program director at a university, and a clinical researcher. The brain is the most complex thing in the known universe. Views expressed here are my own.