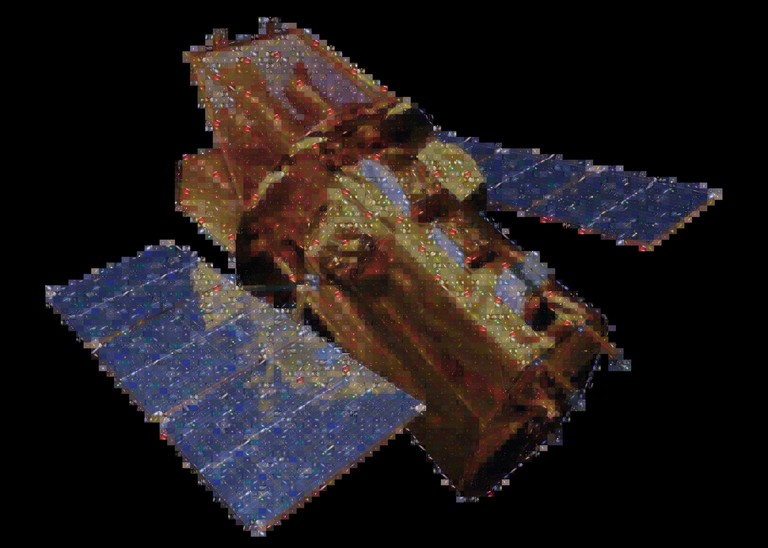 [ThTh1] Today’s Ask an Astronomer question comes via a Facebook request: Are we in danger of being killed by a gamma ray burst?

Gamma-ray bursts (GRBs) are the biggest explosions in the universe. They are the birth pangs of black holes — either through a hypernova or the merging of two neutron stars (neutrons stars being the shriveled husks of dead massive stars). When these events go off, the blast out material along their north and south poles. The effect is that of a lighthouse — if that pole is pointed toward the Earth, we detect a flash of gamma rays — a GRB. My mission — the Neil Gehrels Swift Observatory, which just passed the 15th anniversary of her launch — studies gamma-ray bursts.

A nearby GRB could pose a severe threat. At minimum, it would cause damage to the ozone layer, a global cooling and a significant increase in surface radiation. Increased cancer rates and starvation could follow. A really close one might kill off many of the plankton in the ocean, the basis of the food chain, causing a mass die-off. The Ordovician–Silurian mass extinction event may have been caused by a GRB.

Fortunately, such events are extremely rare — maybe a few per galaxy per million years. And they may be rarer now than they were in the early universe, since most massive stars have died out. Moreover, if the GRB’s beam were pointed away from us, that would significantly minimize the damage.

The only GRB candidate nearby is the Wolf-Rayet star WR 104. This massive star is the final phases of its life and may go out as a GRB. The orientation of the system is unclear so it’s possible the jet will be oriented at Earth. But the last study indicated that was unlikely to be the case.

So, to sum up: GRBs are dangerous. They can kill. But it’s rare. There is one candidate nearby that could be dangerous. But we’re still figuring out whether it is.

[ThTh2] I’ve mentioned Starlink before and the problem that this massive network of satellites may present to ground-based astronomy. Last week, astronomers saw no less than 19 satellites pass through their field of view while they were trying to observe. And no, we can’t just build telescopes in space to account for that. It seems to me that the sky is public property and we’re witnessing a “tragedy of the commons” with companies just launching things willy-nilly. This is not only a menace to astronomy; it’s potentially a menace to space travel as well. We at least need to be having a conversation about this.

[ThTh3] Solar panels are great. But at some point, we’re going to have to talk about how much waste they produce.

[ThT4] The gorgeous and historic Yerkes Observatory may be reopening. I spent a couple of weeks there in graduate school, studying astrometry. I literally stayed in the observatory, sleeping in the “battleship”, an area with lots of bunks and little porthole windows that looked out onto gargoyles. It’s quite a thing to spend the night alone in a vast gothic century-old observatory.

[ThTh5] Was it something it said?

[ThTh6] I’ve probably mentioned the Apple Heart Study before. This could be really interesting and a boon to medical science.

[ThTh7] Well, that’s one way to save fuel on space travel.

Hahahaha check out this alternative transfer orbit to the Moon based on chaotic dynamics, it consumes almost 40% less fuel than traditional maneuvers but takes like 2 years instead of a week and looks 100% like you have no idea what you're doing pic.twitter.com/jcsECd1vHq

[ThTh8] Do animals sense earthquakes before they happen? No. But yes.

[ThTh9] Is this asteroid really worth quintillions of dollars?

This asteroid could be the most valuable thing in our entire Solar System. It's valued at $700 quintillion — that's many billion times more valuable than all of the money in the world today pic.twitter.com/Ky6ENK0udL

That rather depends on how you value things. 16 Psyche is a very metallic asteroid, possibly the core of a failed planet. It’s mostly iron and nickel but may have lots of precious metals as well. Put simply, mining the asteroid would be like mining the Earth without having to dig through all that pesky dirt and rock.

Now, it would cost many hundreds of billions of dollars to mine the asteroid. And bringing in such a huge quantity of precious metals would crash markets. But … that would also mean that metals like gold, which are incredibly useful for technology, would be incredibly cheap. It would mean that everything we buy would cost less and run better.

Mining asteroids is one of those science fiction things … at least for now. But if it ever became science fact, it would transform our economy. And it’s one of the better arguments for more space exploration. There is a NASA mission planned to rendezvous with 16 Psyche in 2026. We’ll know a lot more about the asteroid after that.

[ThTh10] I’ve mentioned the replication crisis hitting science these days. One way this is being addressed is forcing scientists to share their data in order to be published. The result of this change? Way more null results than we used to have (that is, studies that show no connection between two things). It seems that having to let others check your work makes you do the work better and publish fewer shaky claims.

[ThTh11] We live in an amazing part of space.

The 5,000 stars nearest to the Sun. pic.twitter.com/aqvg8FUQUe

Click through to find a tool to explore the nearby universe.