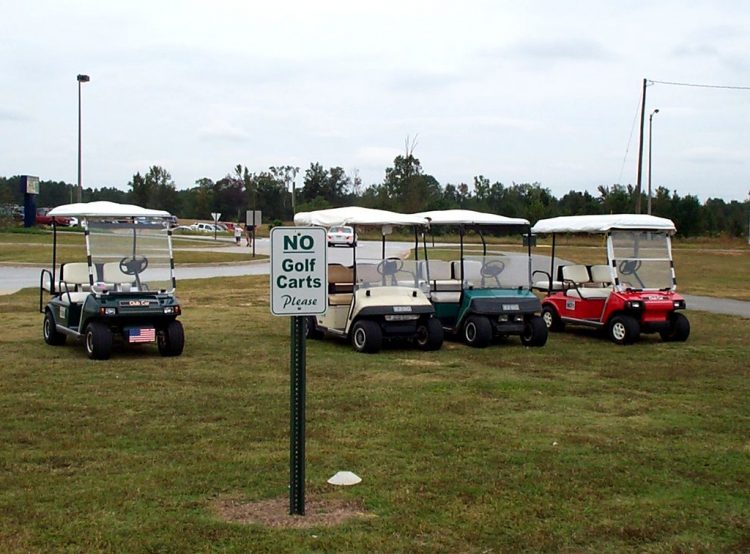 The Supreme Court of the United States finds itself the arbiter of some heavy issues, from life and death to interpretations of the very foundations of our society. It may seem surprising then that the vaunted Court once contemplated the meaning of “golf”.  While this may seem a frivolous matter for such a lofty institution of jurists, it was actually an issue of high importance (though Scalia didn’t think so.)

It began in 1999 when a professional golfer named Casey Martin tried to enter what’s known as “the Q-school”, a three stage qualifying tournament one must participate in before one may join the tour (as well as pay a fee which, at the time, was $3000) Though talented enough to “turn pro”, Martin suffered from a degenerative disease that atrophied his leg and made walking difficult, painful, and dangerous; a broken tibia could result in hemorrhaging or an amputation due to complications with his circulatory system. The third stage of Q-school prohibits the use of a golf cart, as does the PGA Tour. Martin asked the PGA to accommodate his disability and allow the use of a golf cart on the third day, but the organization refused.

Martin filed for and was granted an injunction from the District Court on the grounds that the PGA was violating the Americans with Disabilities Act by refusing to make a reasonable accommodation. While the injunction allowed Martin to compete with a cart, and the PGA opted to waive the rule for all entrants, the PGA continued to argue in the district court with a two fold argument: 1) that the PGA is not a public accommodation and 2) the accommodation sought would “fundamentally alter” the competition, a fact which, if true, would alleviate the requirement of accomodation. The fatigue that sets in on the golfers by the third day is part of the competition, they insisted. Arnold Palmer and Jack Nicklaus testified that fatigue could easily cost a player a stroke and that more than one golf game has been lost by one stroke.

The District Court found that while the rule was intended to make fatigue a crucial element of the competition, there was no evidence that use of a cart would eliminate the fatigue factor for Martin, who even with the cart would walk about a mile during the day’s events, which would be quite taxing in light of his condition.

Furthermore, the Court rejected the PGA’s argument that it was not subject to the ADA. The statutory definition of public accommodation explicitly includes “golf courses”, but the PGA argued that it was the playing field during the tournament that is not a public accommodation. The District Court declined to “”create private enclaves within the facility … and thus relegate the ADA to hop-scotch areas.”

PGA took their case to the Supreme Court in PGA Tour Inc. v. Martin, our Case of the Week. Knowing that denying their tournament field was a public accommodation was a loser of an argument, the PGA instead took the position that the competitors were not customers or clients obtaining goods and services. Instead, they framed the golfers as providers of the service -- the entertainment -- rather than the consumer of them. They framed it as more of a job discrimination related issue, which Martin could not claim because he would be an “independent contractor” rather than an employee of the PGA. The Court was not persuaded, pointing out the $3000 fee paid by entrants as an indication that they were, in fact, customers or clients.

The Court went into a history of the game of golf and its rules, and concluded that golf carts are ubiquitous and cannot therefore be said to be inconsistent with the “essence” of the game. Rather, the PGA differentiates between the game itself and the character of the particular phase of its tournament, due to their claim that “fatigue” is an important element of the competition. The Court cites testimony in the lower court by a physiologist who testified that the energy expended in walking the course is less than the calories in a Big Mac, expended over 5 hours interspersed with rest and refreshment. The Court further points out that many golfers choose to walk even if they are allowed a cart. Even if fatigue was a factor added by walking, said the Court, the PGA is obligated to take into account Martin’s particular circumstances, which inherently add an element of physical exertion:

Congress intended that an entity like the PGA not only give individualized attention to the handful of requests that it might receive from talented but disabled athletes for a modification or waiver of a rule to allow them access to the competition, but also carefully weigh the purpose, as well as the letter, of the rule before determining that no accommodation would be tolerable.

The majority opinion, written by Justice Stevens, was a 7-2 decision. The dissent was, unsurprisingly, from Justice Scalia, joined by Justice Thomas. He begins strongly, as is the Scalia way:

In my view today’s opinion exercises a benevolent compassion that the law does not place it within our power to impose. The judgment distorts the text of Title III, the structure of the ADA, and common sense. I respectfully dissent.

Scalia adopted the PGA’s argument that Martin’s claims are more in line with the employment discrimination section of the ADA, which would not apply due to his “contractor” status. He agreed with the notion that the competitors are the entertainment, not the customer:

Respondent did not seek to “exercise” or “recreate” at the PGA TOUR events; he sought to make money (which is why he is called a professional golfer). He was not a customer buying recreation or entertainment; he was a professional athlete selling it.

But the Q-School is no more a “privilege” offered for the general public’s “enjoyment” than is the California Bar Exam. It is a competition for entry into the PGA TOUR-an open tryout, no different in principle from open casting for a movie or stage production, or walk-on try-outs for other professional sports, such as baseball.

Nor was Scalia persuaded by the Court’s reasoning in rejecting the PGA’s insistence that the cart would “fundamentally alter” the tournament. He reasoned that the PGA need not have shown that the accommodation would alter the game of golf, but only that it would alter its own interpretation of golf. He then subtly worked in reference to the disdain for the designated hitter rule in baseball:

Why cannot the PGA TOUR, if it wishes, promote a new game, with distinctive rules (much as the American League promotes a game of baseball in which the pitcher’s turn at the plate can be taken by a “designated hitter”)? If members of the public do not like the new rules-if they feel that these rules do not truly test the individual’s skill at “real golf” (or the team’s skill at “real baseball”) they can withdraw their patronage.

The dissent was one of Scalia’s most lively, and he made it clear that he thought it was ridiculous that the court was even undertaking this controversy:

… we Justices must confront what is indeed an awesome responsibility. It has been rendered the solemn duty of the Supreme Court of the United States, laid upon it by Congress in pursuance of the Federal Government’s power “[t]o regulate Commerce with foreign Nations, and among the several States,”… to decide What Is Golf.  I am sure that the Framers of the Constitution, aware of the 1457 edict of King James II of Scotland prohibiting golf because it interfered with the practice of archery, fully expected that sooner or later the paths of golf and government, the law and the links, would once again cross, and that the judges of this august Court would some day have to wrestle with that age-old jurisprudential question, for which their years of study in the law have so well prepared them: Is someone riding around a golf course from shot to shot really a golfer? The answer, we learn, is yes. The Court ultimately concludes, and it will henceforth be the Law of the Land, that walking is not a “fundamental” aspect of golf.

Scalia wrapped up with what was essentially criticism of the majority’s decision as a misguided effort to create a literally equal playing field by adjusting the rules to accommodate a player who would otherwise be physically unequal to his competitors, a goal he did not believe proper, calling it “an Animal Farm determination that fairness and the ADA mean that everyone gets to play by individualized rules which will assure that no one’s lack of ability (or at least no one’s lack of ability so pronounced that it amounts to a disability) will be a handicap. The year was 2001, and ‘everybody was finally equal.’ K. Vonnegut, Harrison Bergeron, in Animal Farm and Related Readings 129 (1997).

Casey Martin did not have much success during the years of litigation, but he did qualify for the 2012 US Open, where he won a sectional. He is currently the head coach of the golf team at the University of Oregon, which won a national championship in 2016. Just last month, Martin suffered a broken tibia, the injury he feared throughout his career, while taking out the garbage at his home.

L2: The execution date of a man convicted of murder in what some call a miscarriage of justice has been halted, for now.

L3: How an unscrupulous “precious metals” company scammed elderly conservatives out of hundreds of thousands of dollars by targeting Fox News viewers and invoking fears of “the deep state”.

L5: Julian Assange’s prison-provided computer is inadequate to help him prepare his fight against extradition, his lawyers told a judge. American prisoners: “LOL”.