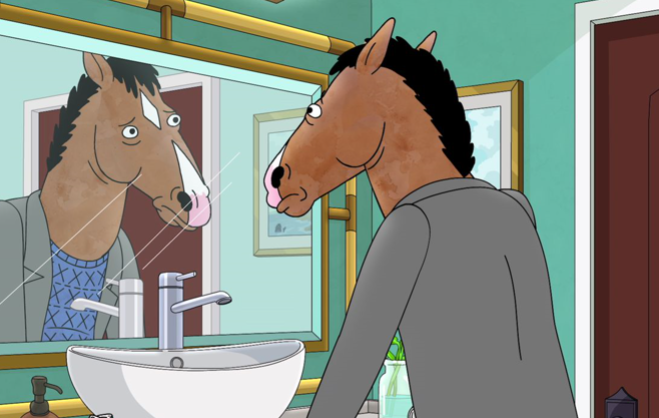 BoJack Horseman is a weird, hilarious animated series that portrays mental health issues so realistically at times that you almost forget it takes place in a world full of talking animals. The newest season has some incredible mental health moments in it, but first, a quick nod to 3 perfect psychology-related Season 6 lines:

“Narcissus? I thought the painting was about me.” -BoJack Horseman

“I’m not a therapist…I’m a therapy horse, a subtle but legally important distinction.” -Doctor Champ

“You understand a joke about deflection is still a deflection, right?” -Doctor Champ

Holly Hock starts having a panic attack at a party where she doesn’t know anyone. Peter approaches her and teaches her grounding, which is a therapeutic tool used to cope with anxiety. What makes the scene especially moving is that Peter sees someone he doesn’t know, shares a technique he learned in therapy, and says that he learned it from his psychiatrist without any shame.

Caroline struggles with balancing work responsibilities, caring for a newborn, and sleep deprivation. The show beautifully illustrates this through multiple Caroline figures simultaneously and repeatedly doing tasks (e.g., changing diapers, shaking a rattle, making work calls). At the end of the episode, she turns to Vanessa Gekko and says, “Can I ask you something? So, there’s work, right? I mean work makes sense to me. And I’m good at it. I don’t feel that way about my baby. I don’t think I’m feeling what I’m supposed to feel. What I thought I would feel. I mean, I love her, of course I do. Of course, I love my daughter. But…I don’t know if I love her. I know I’m a terrible person for even thinking it, but…what if it never happens?” Many parents have these types of feelings after the arrival of a baby. Reacting to those thoughts with shame may contribute to postpartum anxiety and depression symptoms. Scenes like this help to normalize these emotions. Gekko also helpfully points out that Caroline is making sure that all of her baby’s needs are met and is therefore doing a great job.

Mr. Peanutbutter says to Joey Pogo, “Before I depart with you on a cross-country tour of speaking engagements as the quote-unquote ‘Face of Depression,’ there is something I feel I must get off my chest. I am not depressed.” Mr. Peanutbutter then picks up his glass, looks at it, and says, “Just as I suspected…half-full! I would be quite upset by this if I were at all prone to depression.” Pogo responds, “According to the literature for this tour that I did not read, but had my mom peruse and then paraphrase for me, people who seem happy can actually be the most depressed.” While some people conceal their depression, they definitely don’t feel happy on the inside. I like this scene so much, because it satirizes situations where someone who is vaguely familiar with a psychology-related term confidently applies a diagnosis and how that’s totally problematic.

Bojack asks Diane if she’s going to take antidepressants. She asks, “What’s the point?” Bojack replies, “Of antidepressants? I believe the point is to be anti-depressed.” Then, Diane shares why she’s reluctant to seek help, “Or you just flip over the nothing and underneath there’s more nothing.” Clients sometimes worry that therapy will lead to the discovery that they are beyond help. In depression’s faulty internal logic, the thought is that it’s better to feel down with a glimmer of hope that things might change rather than try treatment and feel devastated if it fails. I’m so happy Diane pushed through that and sought treatment.

BoJack’s rehabilitation center, Pastiches, is extremely expensive, yet it offers treatments that are not evidence-based (e.g., sleep therapy, visiting therapy, plant therapy). Difficulties finding accessible and effective addiction treatment centers are real and deeply concerning, as you can read about in Vox and this New Yorker article. A second, much more lighthearted aspect of their portrayal includes poking fun at platitudes used by therapists. Doctor Champ is full of these sayings, “Life is precious. God is religious, or merely the idea of a human connection. Don’t do drugs. Say you’re sorry.” Therapists collect certain phrases, analogies, and acronyms that they repeat with clients, and it was funny to see this depicted in ridiculous extremes.

Doctor Champ recognizes that BoJack has gained new perspectives about his past, acquired coping skills, and that it’s time to conclude residential treatment. BoJack responds with fear about leaving and states that he wants to stay indefinitely. After Doctor Champ expresses a series of “wise” sayings to Joey Pogo, BoJack responds, “That’s the problem. When you say it in here, it all sounds easy. But I know that out there it’s hard and confusing.” I’ve heard clients express these sentiments in our sessions. It leads to important discussions about anticipating and overcoming obstacles.

Like many people ending treatment, BoJack lacks confidence about maintaining gains and confronting the consequences of his past behavior. However, the goal of therapy is to equip people with tools to live their lives. Like a good therapist (technically, a therapy horse), Doctor Champ reminds BoJack that he has a support system that he should ask for help. He also tells BoJack rather sternly to continue the recovery process by seeing a psychiatrist, attending AA meetings, or whatever else he needs to remain sober. BoJack then unintentionally thwarts Doctor Champ’s sobriety, which seems like a necessary twist for such a twisted show.