Harry Potter and the Many Faces of Motherhood 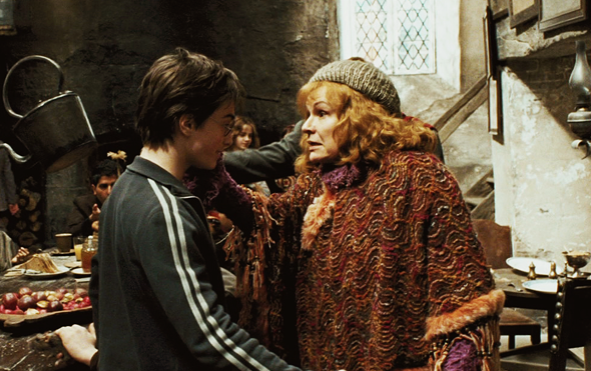 **WARNING: Spoilers. But if you haven’t seen Harry Potter by now, I assume you won’t care. **

Everyone knows that Disney films are all about mothers. Dead mothers, fairy godmothers, evil step-mothers. In fact, motherhood is a running theme in much of literature, movies, and television. And if you think about it, which I have, the Harry Potter series is also all about mothers. Sure, ostensibly, it is about a magical teenage boy and his group of magical friends taking on the world’s most dangerous and omnipotent villain, but that’s merely the surface. Harry Potter, both on screen and in the books, is also about the many iterations of motherhood, how it manifests, and the many ways in which it alters the world.

We start of course with the most obvious icon of motherhood: Lily Evans Potter, Harry’s mum. Lily is the saintly mother archetype. Young and beautiful, she literally sacrificed herself for her child, throwing her body in between baby Harry and Voldemort’s curse. In case you have managed to keep yourself unaware of the general story, that’s essentially the basis of the books: Voldemort tried to kill Harry to ensure is own immortality based on a prophecy, but Lily jumped in front of his wand and the curse rebounded and destroyed Voldemort (temporarily), but not before killing Lily (permanently) and leaving a lightning bolt-shaped scar on Harry’s forehead. Harry thus became the only person to ever survive Voldemort’s killing curse, and his continued existence impedes Voldemort’s quest for immortality. It takes a decade or so for Voldy to regenerate enough to seek revenge and to kill Harry, right around the time Harry reaches puberty and begins his matriculation at Hogwarts School of Witchcraft and Wizardry. But I digress. The point is, with Lily we have the purity of motherhood, the completely selfless version. And because she doesn’t live long enough to miss a school play, feed him cereal for dinner after a long day at work, or lose her shit on him when he leaves his backpack on the floor RIGHT IN FRONT OF THE DOOR WHERE SHE TRIPS ON IT EVERY DAMN DAY, she is forever immortalized as the ideal.

On the other hand, we have Harry’s stand-in mother, Lily’s much less charming sister Petunia who very begrudgingly takes Harry in after Lily’s death. Petunia as a mother has two sides: the cold, cruel woman who never lets Harry forget what a burden he is, and the doting, overindulgent, child-spoiling mother she is to her own son, Harry’s cousin Dudley. She is the “evil step-mother” trope, the un-nurturing, abusive figure from whom Harry finds respite at Hogwarts. Her character is a bit too on-the-nose as the hardship Harry must endure due to the loss of his mother, a high-visibility contrast just in case the reader/viewer didn’t get the point, the complete opposite of Lily’s version of mothering. And yet, even Petunia is redeemed, somewhat; it is revealed late in the series that even through her indifference and cruelty, Petunia’s love for Harry, scant as it is, is powerful enough to have protected him from Voldemort while he was under her care. The mighty power of love, y’all…or a bit of Deus Ex Machina to explain why Dumbledore (headmaster of Hogwarts) required Harry to go back to his aunt’s house every summer when school was out.

But while Petunia seems the obvious choice for worst mother figure in the series, there is another woman vying for the dishonor: Fridwulfa. Fridwulfa was a giantess, mother of beloved Hogwarts groundskeeper and caretaker of magical creatures, Rubeus Hagrid. Hagrid’s father was a normal sized human, making Hagrid only a half-giant, a mere 11 feet tall. His relatively small size was a terrible disappointment to Fridwulfa, who abandoned Hagrid and his father when he was a baby to rejoin her clan of giants. She was neither a directly good or a bad influence on her son’s life; she was a non-entity. A complete absence of motherhood. One can speculate that Hagrid’s fondness for undesirable creatures, such as ill-tempered Buckbeak the hippogriff and Aragog the giant spider, was his way of making up for his mother’s rejection of him as undesirable.

Both Lily and Fridwulfa are absent, for the most opposite reasons.  But mothers are not all absent in the Harry Potter series. Quite present is Molly Weasley, red-headed mother of 7 red-headed children including Harry’s first and best friend, Ron. Plump, matronly, and in full control of her bustling household, Molly is Lily fully realized. She’s middle aged, not a forever-young-and-beautiful ghost who can be idealized by virtue of not living long enough to reveal imperfection. She’s kind and nurturing. She’s a homemaker, cooking and cleaning both by hand and by magic. She’s a domesticated witch. She’s that friend’s mom who always asked if you were hungry when you went to their house. But Molly has seven children, six of them boys, and she doesn’t keep them in line by being a shrinking violet. She has commanded their respect. She shows the toughness at the core of her soft exterior during the great Battle of Hogwarts 1, when the evil Death Eater (Voldemort follower) Bellatrix LeStrange attacks Molly’s little girl, Ginny. “Not my daughter, YOU BITCH!” she snarls at Bellatrix, and with some fancy wand work culminating in one last devastating thrust, she literally obliterates her. Molly’s actions are reminiscent of Lily’s, risking her life to save her child. But with the more developed character of Molly we see a multidimensional depiction of motherhood: the nurturing and the strict, the softness and fierceness, the kindness and the violence of which they’re capable. She’s more than a housewife and mother; she’s a competent and powerful witch (or replace witch with any number of outside-the-home activities in which a mother participates.)

The Weasleys are a “good” family, on the right side of the fight against Voldemort’s evil. The Malfoy family, on the other hand, are devoted Death Eaters. Lucius and Narcissa Malfoy are the faux-Aristocratic parents of Draco Malfoy, Harry’s antagonist at Hogwarts. Lucius is a nasty and ruthless man, doing his best to earn favor with Voldemort- to the point of willingly letting Voldemort use Draco to perform his vile bidding. Narcissa quietly goes along with her husband, neither objecting nor cheering him on. 2 But Narcissa has a moment in the series that highlights her motherhood, after the Battle of Hogwarts when Harry appears to be dead and Voldemort sends her to examine his body to be sure. Narcissa realizes Harry is alive, but she does not betray him to Voldemort. Instead she asks, in a whisper, whether Draco survived the battle. Harry confirms that he did, and grateful Narcissa reports that Harry is indeed dead.  Again, despite the danger to herself in a precarious situation, a mother’s priority concern is her child.

If even villainous women protect their children above all else, then the worst mother must be the indifferent mother. Which brings us to the mother of all evil: Merope Riddle.

Merope’s story is absent from the movies but explored in the books. She was the poor and mistreated daughter of Marvolo Gaunt, who mocked, abused, and berated her throughout her young life. Merope was described as unattractive and lonely, until her father was sent to Azkaban (the wizard prison) when Merope was 18. At this time, Merope caught site of a rich, handsome muggle (non-magical human) named Tom Riddle and fell deeply in love. He of course wanted nothing to do with the poor slovenly girl, but she used her magic to entrance him and force him to love her. He married and impregnated her, but after a year she lifted the spell, believing he would have grown to love her genuinely by then. He had not, and fled back to his family

Distraught, defeated, depressed and destitute, Merope staggered into an orphanage on New Year’s Eve, where she gave birth to a son. She gave him the name Tom Marvolo Riddle, after his father and grandfather. Weakened and near death, Merope had the power to heal herself and be there for her baby. But this meant nothing to her, so immersed was she in her own misery and heartbreak. She opted to let go of her life, leave her son to fend for himself, and die.

This left Tom to be raised by the orphanage. When he learned of his mother’s choice- he considered it a choice- to die rather than care for him herself, he was angry. He viewed her decision as cowardly and weak. Death was, in his opinion, a shamefully human characteristic. It proved to be a catalyst for what came next, when young Tom grew to become the evil dark wizard Lord Voldemort (“I am Lord Voldemort” being an anagram of Tom Marvolo Riddle.) He is the ultimate “Mommy didn’t love me enough” arch villain, whose disdain for her sparked a wizarding war between good and bad magic and a mission to eradicate muggles (despite his being half-muggle himself, a possible reference to the disputed theory of Adolph Hitler’s Jewish ancestry?)

It’s always the mother’s fault, isn’t it? When a person does well in life and succeeds, we assume good parenting. When a person becomes history’s most powerful evil wizard and seeks to kill off most of mankind, well, that’s because his mom was too much/not enough. Too much Merope and not enough Lily.

Personally, I think I’ll strive to be a Molly.