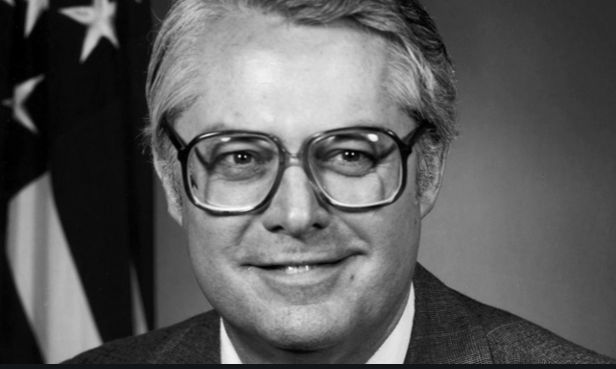 L1: In 1968, as Lyndon Johnson’s presidency came to an end, an analyst for the Department of the Air Force appeared before congress and testified about some technical and budgetary issues with the under-development C8 transport plane, which was on track to cost $2 billion more than projected. A few months later, following the inauguration of President Richard Nixon, the analyst — Ernest Fitzgerald — was dismissed from his employment, ostensibly due to a department “restructuring.” His dismissal raised eyebrows in congress, and the President vowed to look into the matter. Nixon directed his staff to find Fitzgerald another position, but White House aide Andrew Butterfield balked. Said Butterfield: “Fitzgerald is no doubt a top-notch cost expert, but he must be given very low marks in loyalty; and after all, loyalty is the name of the game”, and that they should “let him bleed, for a while at least.”

I was totally aware that Mr. Fitzgerald would be fired or discharged or asked to resign. I approved it and Mr. Seamans must have been talking to someone who had discussed the matter with me. No, this was not a case of some person down the line deciding he should go. It was a decision that was submitted to me. I made it, and I stick by it.”

However, the following day, the White House avowed that Nixon had confused Fitzgerald with another former employee, and retracted his acceptance of responsibility for Fitzgerald’s dismissal. Meanwhile, the Civil Service Commission issued its findings, opining that the reorganization of staff within Fitzgerald’s department was only a pretext intended to get rid of the analyst. The Commission recommended reinstatement. However, while the findings were that the force reduction was motivated by personal animus against Fitzgerald, they also explicitly denied that evidence proved the firing was retaliation for Fitzgerald’s testimony.

In 1978, after several years of litigation and discovery, Fitzgerald amended his complaint to include, as a defendant, the by-then-disgraced former president of the United States, and our Case of the Week, Nixon v. Fitzgerald, was born.

Discovery rolled on, and in 1980 the District Court denied a motion by the defendants for summary judgment- and also denied Nixon the use of absolute presidential immunity as a defense. Nixon appealed the ruling on immunity, and the Court of Appeals upheld the District Court. Nixon then appealed to SCOTUS.

First, the Court rejected a argument by Fitzgerald that it lacked jurisdiction to hear the case because it was no a “serious and unsettled question”. The Court said that while Circuit Courts had ruled on the issue of presidential immunity, SCOTUS had not. Said the Court of the seriousness of the matter, ” [I]n light of the special solicitude due to claims alleging a threatened breach of essential Presidential prerogatives under the separation of powers, see United States v. Nixon.”

In reaching its decision, the Court considered the doctrine of immunity of government officials for official acts. Writing for a 6-3 Court, Justice Powell found that, while there did not exist blanket immunity for all government officials, the duties of certain officials such as prosecutors, judges -and the president- were such that absolute immunity to civil liability for official acts was crucial. In the Court’s opinion, it was necessary for the public good that the Executive be able to freely exercise his discretion without the worry or distraction of litigation.:

Because of the singular importance of the President’s duties, diversion of his energies by concern with private lawsuits would raise unique risks to the effective functioning of government. As is the case with prosecutors and judges — for whom absolute immunity now is established — a President must concern himself with matters likely to “arouse the most intense feelings.” Pierson v. Ray, 386 U.S. at 386 U. S. 554. Yet, as our decisions have recognized, it is in precisely such cases that there exists the greatest public interest in providing an official “the maximum ability to deal fearlessly and impartially with” the duties of his office. Ferri v. Ackerman, 444 U. S. 193, 444 U. S. 203 (1979). This concern is compelling where the officeholder must make the most sensitive and far-reaching decisions entrusted to any official under our constitutional system. Nor can the sheer prominence of the President’soffice be ignored. In view of the visibility of his office and the effect of his actions on countless people, the President would be an easily identifiable target for suits for civil damages. Cognizance of this personal vulnerability frequently could distract a President from his public duties, to the detriment of not only the President and his office but also the Nation that the Presidency was designed to serve.

The Court added the caveat that in order for the absolute immunity to apply, the conduct must be an action which was performed in the course of official duty. This gives rise as to whether a retaliatory – and thus illegal – firing can be said to be within the scope of duty. The Court opined that, because Fitzgerald’s firing was part of an otherwise legal departmental reorganization, an inquiry into his subjective motivations is improper and would lead to every official, lawful act being thoroughly examined for “forbidden purpose”, an unworkable and inefficient result that would “deprive absolute immunity of its intended effect.” In other words, if the action is a lawful exercise of the President’s power “but for” his improper motivations, then he is immune. This standard of “objective reasonableness”, was a rejection of the prior immunity test, which required a showing of “good faith” in the lawfulness of one’s actions in order to enjoy immunity.

To quell fears of a lawless and unaccountable presidency as a result of this ruling, Justice Powell cited impeachment, checks and balances, the press, “maintaining prestige”, and a desire for re-election as means by which the office holder would be restrained from wrong-doing.

Powell’s majority opinion was joined by Justices Burger, Rehnquist, Stevens, and O’Connor. Justice White wrote both a concurrence and a dissent, joined by Brennan, Marshall, and Blackmun, in which he agreed with the outcome of the majority opinion, but disagreed with its holding of absolute immunity.  Burger penned a separate concurrence, mostly to rebut the lengthy dissent by Justice White. Justice Blackmun also wrote a separate dissent, beginning by stating “For me, the Court leaves unanswered his unanswerable argument that no man, not even the President of the United States, is absolutely and fully above the law.” He then goes on to address his concern with the settlement which depended on the outcome of the Court but which was not disclosed until the end of the proceedings. In his view, the resolution should have precluded a grant of certiorari.

The other, non-president defendants, Bryce Harlow and Andrew Butterfield both senior aides to Nixon, also argued for immunity. Simultaneous to the release of this opinion, the Court issued its ruling separately in  Harlow v. Fitzgerald.  Fitzgerald sued them for conspiracy under the same facts as the Nixon case. (Harlow had allegedly been part of conversations with the president in which he advocated for Fitzgerald’s firing.) Harlow and Butterfield also argued for immunity based upon their roles as government officials. Undertaking the same analysis, Justice Powell’s decision found that they had qualified, not absolute, immunity, which could be overcome only by a showing that “clearly established statutory or constitutional rights” had been violated by their official action. The matter was sent back to the lower court for reconsideration of their motion for summary judgment to determine whether the plaintiff Fitzgerald had sufficient evidence to surmount qualified immunity.

L2: A man convicted of murder fights for a new trial and a release from prison with help from an unlikely ally: the prosecutor whose office wrongly convicted him in the first place. Unfortunately, the attorney general for the State of Missouri remains unconvinced.

L3: What does it take to “fight it all the way to the Supreme Court”? More than you might think. Just ask this moose hunter, whose SCOTUS victory cost $1.5 million.

L4: The dread pirate Blackbeard is at the center of a battle in North Carolina over the wreckage of his Queen Anne’s Revenge.

L5: Conspiracy theorist Jerome Corsi’s lawsuit against Robert Mueller has been thrown out after a federal judge finds his claims baseless on their face.

L6: “ALL DEFENDANTS in criminal cases are constitutionally entitled to legal representation, regardless of their ability to pay for an attorney. But what happens when the office charged with providing lawyers for poor people says it is so overloaded with cases that it can’t provide an adequate defense to any more clients?”

L7: When you have fallen from grace so far lawyers won’t take your high-profile case for fear of getting stiffed, you haven’t hit bottom, you’ve hit bottom and bounced. Theranos founder and fraudster Elizabeth Holmes finds herself in just that situation.

L8: Because the Wednesday Writs is a classy affair, presented without further comment: “Wanted Crook Caught Because of His Fart”

L9: Bad Lawyer, Really Mad Judges: Attorney who sued disabled veterans withheld key details from SC judges. “”It just sickens me as a former judge and as a member of the Bar that this type of thing goes on.”