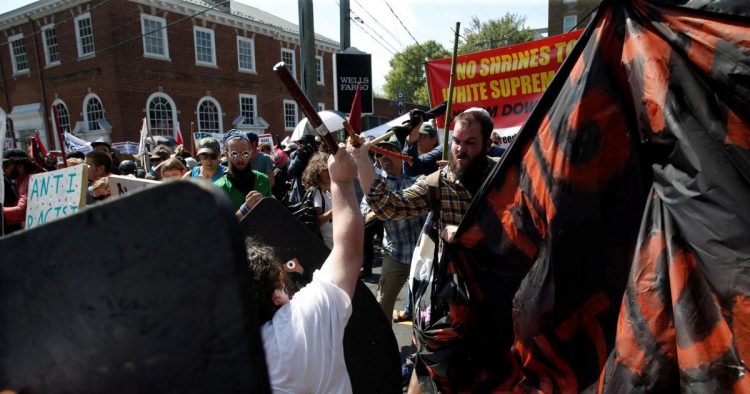 I had not really heard the name Richard Spencer until a passerby sucker-punched him during a TV interview on inauguration day. What I learned immediately after made me less than thrilled that he was associated with so-called Alt-Right and a couple of degrees of separation from the newly elected President. In case you are mercifully unaware of who he is, Jane Coaston has you covered:

Spencer is perhaps the most prominent and arguably the most successful of the so-called “alt-right” white nationalist activists attempting to inject overtly racist ideas into mainstream political thought. In fact, Spencer can be credited (alongside Peter Brimelow and Paul Gottfried) with inventing the term “alt-right,” resulting in the magazine Alternative Right in 2010.

By appearing polite and somewhat well dressed (with multiple ill-fitting waistcoats, for example) and using watered-down terminology like “peaceful ethnic cleansing,” the “self-styled prophet” of the alt-right has waged a media campaign for the last several years to build his own reputation and that of his movement, using Donald Trump’s campaign as a vehicle to make the case for a seemingly kinder, gentler white nationalism.

In interviews Spencer and other white nationalists give to mainstream audiences (like those watching him on CNN and on college campuses), white nationalism is simply a civil rights movement for white people, taking a stand for white Americans in need of defending — at the very least, a differing viewpoint worthy of contemplation and analysis.

To be fair, the vast majority of the media and the pundits have recognized Spencer for what he is: a low-rent David Duke, someone attempting to put a veneer of respectability onto the flaming garbage fire of white supremacy. Men like this always say, “Oh, I’m not trying to oppress black people! I just want white people not to be oppressed!” And there are always enough journalists, idiot far-right-wingers and gullible college kids to make the grift work.

For a while, at least. Because Sunday, we got a real good look at the real Richard Spencer, the slime behind the thin veneer of semi-respectability.

Milo just uploaded leaked audio of Richard Spencer reacting to the death of Heather Heyer and the negative press it did to his movement.

Just in case there was any question of the so-called "dapper white nationalist" being a raged fuelled hateful monster.

(As of this writing, Spencer has not denied the tape is him and several people have gone on record confirming that it is his voice.)

This is a difficult audio to listen to. Spencer rages against Jews, blacks, people of mixed race and the counter-protesters. There is no hint of regret for the earlier attack that left Heather Heyer dead. Only seething rage that what he sees as subhuman filth have the temerity to oppose him.

The audio is honestly frightening, not just for absolute racist rage on display but for the occasional sounds of people agreeing with him. Spencer and his ilk do not have a large following, thankfully. But that following is enough to have turned my beloved Charlottesville into the front line of a race war and to have resulted in murder, terror attacks and harassment.

The tape is horrifying but the tape should be listened to. It should be listened to because I don’t want anyone to ever forget what these people stand for, what they really believe and who they really are. It’s a rare chance, for those of us who don’t walk in white supremacist circles, to see the true nature of our enemy: filled with rage, seething with hatred, obsessed with identity but ultimately impotent. They may be able to terrify some people and even murder some. But their dream of changing America to a white nationalist ethno-state is a delusion, a fantasy puffed up by imagined history, an America that only exists in their fervid imaginations and their own shrinking insignificance.

I’ve purposefully left out the provenance of this tape, although it’s mentioned in the quoted tweet. It apparently comes from an alt-right group that has split from Spencer via an infamous pseudo-Right grifter who has fallen on such hard times he’s slumming as Jacob Wohl’s stylist. It’s supposedly in retaliation for Spencer leaking a tape of him throwing Nazi salutes an at event, one of the many incidents that triggered said grifter’s aforementioned downfall. I think it’s incredibly revealing that these alt right creatures know that the easiest way to destroy each other is to expose what they really think.

Coaston’s article goes into detail about the growing rift in the alt-right. I’m perfectly fine with the various right wing grifters and the various right wing monsters destroying each other, although I am concerned about the potential collateral damage to us as they lash out. But none of them are welcome to slither back into the tent of respectability just because they took down a fellow slime ball.

Let no one pretend that the Alt Right is something respectable. Let no one let these creatures into the political tent. And never support a politician or a publication who plays footsie with them. Because this is who they are. This is who they’ve always been. And I am, in a way, thankful that we’ve gotten another stark reminder of that.