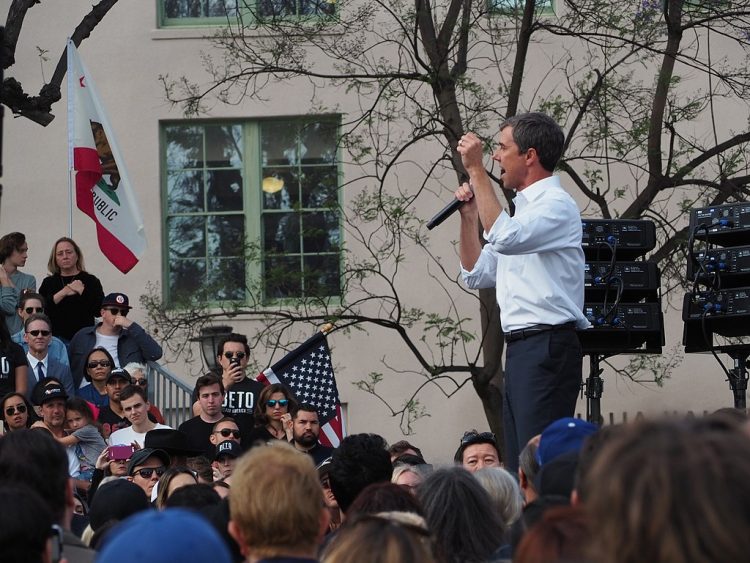 “I think that’s the beauty of elections: You can’t hide from who you are,” Beto O’Rourke had told Vanity Fair in the now-infamous campaign launch piece that featured words by Joe Hagan, glamour shots by Annie Liebovitz, and Artemis the O’Rourke family dog looking forlornly into the camera as if silently screaming for rescue from the ridiculousness of it all that launched thousands of memes.

Beto O’Rourke not only failed to hide who he was, he never seemed to have much of a grasp on it to start with.

“I honestly don’t know how much of it was me,” he says. “But there is something abnormal, super-normal, or I don’t know what the hell to call it, that we both experience when we’re out on the campaign trail.”

O’Rourke and his wife, Amy, an educator nine years his junior, both describe the moment they first witnessed the power of O’Rourke’s gift.

It was in Houston, the third stop on O’Rourke’s two-year Senate campaign against Ted Cruz. “Every seat was taken, every wall, every space in the room was filled with probably a thousand people,” recalls Amy O’Rourke. “You could feel the floor moving almost. It was not totally clear that Beto was what everybody was looking for, but just like that people were so ready for something. So that was totally shocking. I mean, like, took-my-breath-away shocking.”

Floor moving and emotions aside, we cannot be too harsh on Beto himself here, for he was set up to fall from his perch as idolized next big thing during his campaign against Senator Ted Cruz. We can lay blame on his shoulders for not understanding the circumstances and reasons behind his rise to national prominence, and he should be commended for not dragging on with the reality of defeat so clear, unlike a dozen others who are yet to do so. Beto O’Rourke, erstwhile fresh new political hotness, was set up to fail in his windmill tilt for the White House from the beginning.

When he remarked in that Vanity Fair piece that “I’m just born to be in it,” the editors thought it so important a line it was the subtitle to the whole piece. Thing is, Beto was born “to be in it” but not in the way he thought. It wasn’t his physical birth, or his previous stint as a congressman, or his personal wealth that made him “born to it”. It wasn’t his policies or his charisma, or any discernible inkling of anything special or unique about him that screamed to the world he was “born” for it.

The reality was Beto O’Rourke’s star turn in his senate and presidential runs were almost entirely the creation of other people’s imaginations, a physical manifestation of hopes and dreams and maybe-perhaps-this times that found a home in the telegenic O’Rourke.

The tease of perhaps unseating deep red Senator Ted Cruz in deep red Texas was intoxicating to Democrats. Not particularly popular in his own party, Cruz is utterly reviled outside of it. The prospect of sending Ted packing was enough to elevate Beto to national attention as the proxy for folks who really, really wanted the upset to happen.

But in that rise, the eventual fall of Beto O’Rourke was baked into what is, to this day, his greatest accomplishment: a failed Senate race. Rising tantalizingly close to Cruz made him a nation-wide idol to politicos. But the problem with idols is they are man made, and those who made them know it deep down, no matter how much magic, signs, and wonders the crowd attributes to it.

This idol of Beto was made not of melting down the people’s gold like some other famous idol, but in massive amounts of campaign donations, the real object of worship for the political powers that be. Beto for Senate raised over $70 million and spent almost $80 million. The money people and power brokers not-so-subtly hinted that Beto may be better in a repeat performance than a run at higher office. They knew that the much more formidable Senator John Cornyn awaited in 2020, and if nothing else Beto proved he could rake in the money. But while turning Texas blue remained the highest of fantasy for the party powers that be, Beto had already had a taste of the big time, and found he liked it. In one of the more eye-rolling parts of the Vanity Fair piece, Hagan served up an analogy that has new meaning now:

Beto O’Rourke seems, in this moment, like a cliff diver trying to psych himself into the jump. And after playing coy all afternoon about whether he’ll run, he finally can’t deny the pull of his own gifts. “You can probably tell that I want to run,” he finally confides, smiling. “I do. I think I’d be good at it.”

The problem wasn’t that O’Rourke would work up the courage to take the plunge; it was that he should have never been up on that cliff in the first place. Those who had conjured forth Beto the almost-won senate candidate had other and varied interests in a two dozen deep national field of presidential hopefuls. The phalanx of party unity and media adoration would not be running point on a quest for 2020 White House glory the way the nation’s left did for the crusade against Cruz.

In no small part, many of those who supported him against Cruz knew the truth: that Beto was a hero of a moment that didn’t work. That he was an idol created out of an unprecedented fundraising haul, cast as an object to be revered because of unified hatred of his opponent more so than any qualities of his own. That on a national stage, there would be no hiding the flaws, failings, and quirks that the lower ranks of power can sometimes mitigate and excuse. That the idol, having been worshiped and adored and that-a-boy’d so much he started to actually believe the crowds, somehow had not, on his numerous attempts of self-discovery, figured out who Beto O’Rourke was.

Fittingly enough, his most genuine and understandable moment of clarity also doomed what little chance his candidacy had. When the horrific Walmart slaughter in his hometown of El Paso, TX occured, naturally many eyes turned on that community’s most high-profiled son. He responded with honest, open, raw emotion. He focused almost all his efforts after on the gun problem he felt was the cause, and the things that had motivated the shooter. In doing so, he went so far in his zeal that even Michael Bloomberg, patron donor to all causes involving restricting guns in America, thought he had gone too far to be helpful. When pressed in interviews and debates he had no answers beyond his earnest belief that it had to be stopped.

It was a microcosm of Beto 2020: big on words and ideas, no idea what to do with them. Shiny on first glance but not really anything there the longer you looked. Plenty of singing and worship at the onset, disappointment and failure in the end. The people suddenly remember that they raised up the idol because of their displeasure of the previous one, and in failing to topple the order they were rebelling against, they turn away from it, moving on to seek out the next one.

Such is the fate of fallen idols. But Beto will always have those sweet Annie Liebovitz glamour shots for the walls of his home. And Artemis can rest easy; he won’t be subjected to any further photo shoots in the near future. And he has a lovely family who will be happy to have him home, and the thanks of a political public for having the grace to know when it was time to go there. At least in bowing out when the obvious was obvious, with more than a dozen candidates with no hope of winning still hanging on, we can all look up to O’Rourke for a moment with gratitude he has at least, for now, let go of the idea of Beto the change agent.

Back in March when the Vanity Fair piece was supposed to launch O’Rourke, the question way this:

For those skeptical of Beto O’Rourke, his squaring of the “all in this together” Beto with the mystical wonders of “feel the floor moving” magical mystery Beto will be quite the trick to pull off. Will voters “witness the power of O’Rourke’s gift?” Or will his doubters be proven right, that the El Paso native is more sizzle than steak? We have 20 months of vetting, if that long, to find out.

Now ends the fluff. We will see what, if anything, of Beto O’Rourke holds up.

And now we have the answer, and the search for Democratic America’s next idol moves on, as does the Democratic primary process. The folks hoping that the same person fills both roles will move on to the next “next big thing” and the political world continues to turn.

The paragraph in the Vanity Fair piece before the “cliff diver” analogue offers a fitting coda to Beto O’Rourke, not the candidate, but the man at home, where he will now return, contemplating things without a campaign surrounding him.

It’s 10:30 P.M. and Amy (O’Rourke) is now curled up on a chair next to Beto, scrolling through e-mails. The kids are asleep. I ask O’Rourke if he could see himself among the presidential biographies on his shelf—Washington, Lincoln, Kennedy. “I haven’t really thought about that,” he says. “I think, ego-wise, we’re going to be O.K. if we don’t run. Where we won’t be O.K. is, if we don’t run and come to the conclusion later on, if we had run, man, this wouldn’t have happened. Things would have been a lot better. Or—”

“You didn’t do everything you could,” Amy says, completing his sentence.

“We didn’t do everything that we could,” he says.

Beto O’Rourke tried. He failed. No shame in that. Here is hoping he spends time before whatever is next for him on Beto O’Rourke as he is, not as everyone projected Beto the Idol to be.