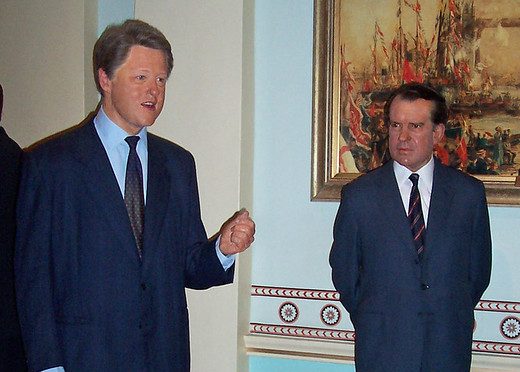 Bill Clinton and Richard Nixon at Madame Toussaud’s in London. Photo credit: In Sappho We Trust, 2003.

The movement to impeach President Trump is in some respects a movement for a kangaroo court. But we should support it anyway.

It’s a kangaroo court for two reasons. The first is that impeachment is a political process. Therefore, it’s always going to smell a little like a kangaroo court. Presidential impeachment is essentially about marshaling the votes to remove a president from office.1 That’s true even if a president is caught on tape saying unironically, “I’ve just committed a high crime or misdemeanor,” elaborating in colorable detail exactly how he did so, and noting what easily obtainable evidence will further document the crimes.

The second reason is that since November 2016, we’ve had a large number of prominent people calling for Mr. Trump’s impeachment. They seemed to be doing so in the belief that of course Trump was guilty of an impeachable offense. After all, he’s Trump. You may object that I have no citation and that I have done no systematic study of calls for his impeachment. Point and match. It probably stings a bit to be accused of something by someone who has already decided you’re guilty before seeing the evidence. But remember that sting, in case you need to deal with others who aren’t quite on board with the program.

Why I support impeachment (for now)

Speaking for myself and copping to a certain sympathy for anti-anti-Trumpism, I’ve supported removal from office by some legal means since day one. Probably, that is. It’s easy for me to project my current views backward. But I seem to recall believing Trump was and is manifestly unfit for office. He is dangerous and incompetent, and he purposefully draws his support by appeals to racism and xenophobia that lack even the fig leaf of dog whistles.

But I can’t claim I support impeachment because Trump has broken the law. He probably has, and maybe some of that lawbreaking rises (or falls) to the level of “high crimes.” But I haven’t personally viewed the evidence, and I’m not a lawyer. Perhaps Trump has committed “misdemeanors” in the etymological sense of “ill-behavior, evil conduct, fault.” And maybe that’s what the founders had in mind when they said “misdemeanors” merited impeachment. But I’m chary of using that argument because I’m not a convert to originalism, as many, many of the current supporters of impeachment seem to be.

Over the past few months I’ve waffled over impeachment.3 At times, I’ve worried whether it was prudent. I still fear that going for impeachment–now–might help reelect Trump, although unlike fellow OT’er Andre, who makes the contrary claim, I have no evidence and have done no research. But at other times I’ve said the House should impeach because doing so would be the right thing, even if it fails.

For now, I’ll just say I support impeachment. And if it happens, I’ll support conviction by the Senate, even if that means 9 years of President Pence. Maybe I’ll change my mind tomorrow.

At any rate, impeachment, for good or bad reasons, will lead to effects. Those effects will be some mix of desirable and undesirable. What shape they’ll take, I don’t know. But if those of us who pursue impeachment don’t do so wisely, and especially if we succeed, we may regret it. Here’s my unsolicited advice for going about it: